A Look Back at WWI War Coverage in Brampton

While WWI took place long before modern day Brampton and Mississauga became the cities they are today, Peel-area newspapers covered the event and its much-anticipated ending.

In fact, here’s a look at some local war coverage, courtesy of the Peel Art Gallery Museum + Archives (PAMA):

Poppies are a universal symbol of grief, remembrance and respect, inspired by the poem In Flanders Fields, written by Lieutenant-Colonel John McCrae of Guelph, Ontario.

Dr. McCrae was stationed near Flanders, Belgium when his friend Lieutenant Alexis Helmer was killed. Helmer's death and the poppies growing in the rows of crosses on soldiers' graves inspired McCrae to write the poem.

In Flanders Fields was first published in Punch Magazine in 1915, and quickly became popular for memorials, fundraising campaigns and recruitment drives. 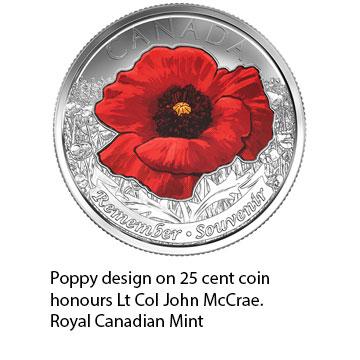 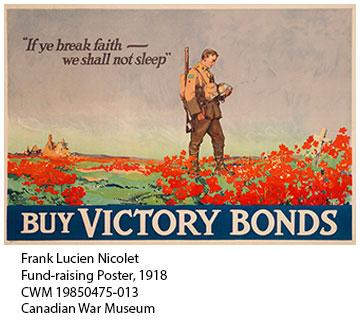 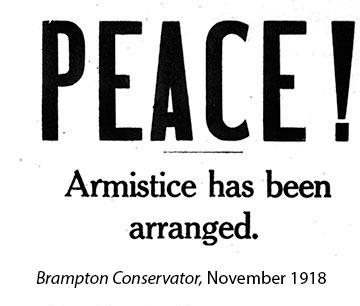 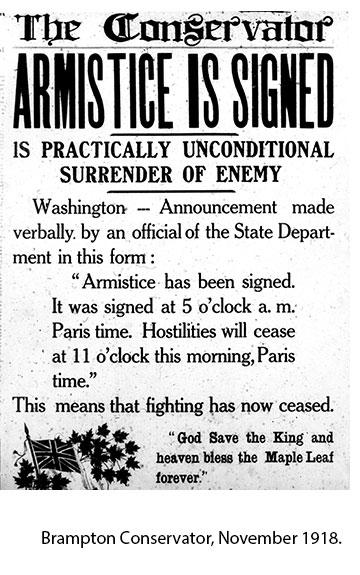 The signing of Armistice on November 11, 1918 ended the combat of the First World War, 100 years ago this Sunday.

The Streetsville Review, November 1918. Families across Peel rejoiced at this news with bells ringing, music playing, and community celebrations across the County. Canada and its citizens were changed after long years of war. Families mourned the many sacrifices made by their loved ones, and by all Canadians who served. Over 172,900 were wounded, and more than 66,000 were killed.

In the 100 years since, Remembrance Day on November 11 has come to honour all those who have served in Canada's military, in war and in peace.

During World War I, over 1700 men and women from Peel enlisted. Farmers, students, professionals, doctors, nurses, veterinarians, and dentists served in all ranks of the Canadian military. Many did not return.

Learn a few of their stories at Peel Art Gallery, Museum and Archives (PAMA) in their new small exhibit, War’s End: Peel Stories of World War I on from Nov. 10 - Oct. 6, 2019. Explore some firsthand accounts, photographs, documents, art, and artifacts which provide a powerful glimpse into the impact of the war on daily life a century ago. 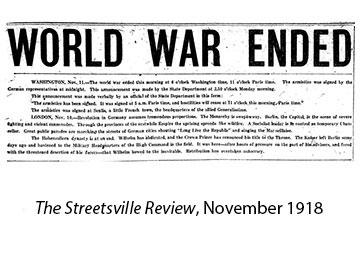 PAMA is a place to explore and learn about Peel Region's culture and heritage, as well as use conversation, questions and stories to help make new and fascinating connections to the surrounding community. Throughout the year, PAMA offers a variety of workshops and programs for all ages, families and adults. With so many different programs to choose from, PAMA has something for everyone. Operated by the Region of Peel, PAMA is located at 9 Wellington St. E.in Brampton.

Copy and photos courtesy of PAMA