A Major Company is Closing Down in Brampton

Brampton has seen a number of jobs leave the city for some time, and now there’s more of that on the way.

This time it’s in the meat and poultry sector.

Maple Leaf Foods, the Canadian packaged meat company, announced today that they are building a world class poultry facility in London, Ontario at a cost of $660 million that will bring over 1,400 full and part time jobs.

But at the same time, the company also announced that they will be closing plants in Brampton, Toronto and St. Marys.

The Brampton and Toronto facilities are expected to close by 2022, while the one in St. Marys (just outside London) is slated for closure by 2021. MLF says these plants are between 50-60 years old, with “location, footprint and infrastructure constraints that limit opportunities to expand and modernize to meet growing market demand.”

“We deeply regret the impact that these eventual closures will have on our people and communities,” said Maple Leaf Foods President and CEO Michael McCain. “While these closures are several years away we are informing our people well in advance, allowing us to openly communicate and support them through this long-term transition.”

“We will provide them with job opportunities at the new facility and other Maple Leaf plants, and services to help them eventually secure new employment,” McCain added.

The union representing meat and poultry workers released this statement, adding how this will affect some 324 workers in Brampton.

“These plants employ a lot of people in good paying, unionized jobs,” said Shawn Haggerty, President of UFCW Local 175. “While adding the London facility will be good for that city, this announcement is bad news for St. Marys and Brampton. It will be difficult for the workers and their families, as well as those communities.”

The funding was pointed out by a representative of the Canadian Taxpayers Federation that the federal and provincial governments were, in his opinion, paying MLF to lay people off. 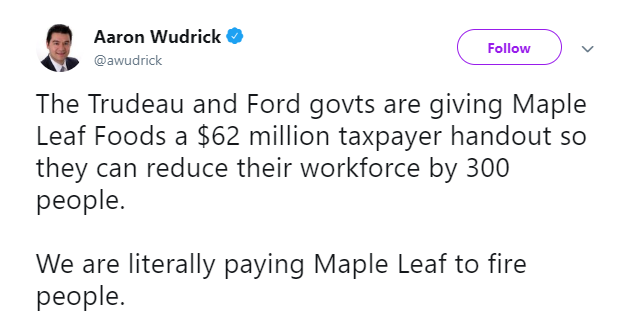 Construction for the London plant is slated to begin in 2019.