Are Major Changes Coming to this Brampton Neighbourhood?

A lot of focus on Brampton’s development has been in the more central and populated areas such as Brampton’s downtown and Bramalea, with some focus on the city’s eastern and western outer fringes as there is still more room to develop in those areas.

However as changes to the development of Brampton continue to move forward, there are those who are looking to at least try to preserve some of what they call the “unique characteristics” of their neighbourhood from over development. But there are those in those very neighbourhoods who are content with doing something to properties they’ve seen sitting vacant for years.

Case in point, during a recent city planning committee meeting on February 11, Brampton councillors heard a proposal to “recommend improvements to city policy zoning in order to protect the unique cultural, historic, natural and landscape qualities of the Marysfield Neighbourhood.”

The Marysfield area is a small community in northeast Brampton very close to the Caledon border along Mayfield Road, as shown on the map below:

According to local residents, the area has a ‘rich history’ dating back to 1954 when 14 families came together to form the first housing cooperative as well as the first Catholic mission parish in Ontario, affiliated with St. Patrick’s Church in the neighbouring Brampton community of Wildfield, the second oldest church in the Archdiocese of Toronto. Due to that early affiliation with the church, the neighbourhood was shaped like a rosary. 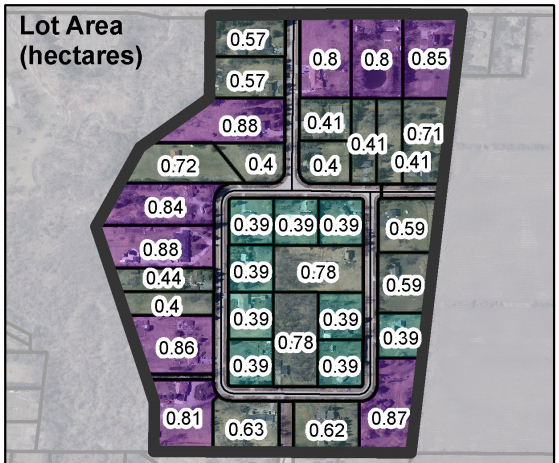 Some of the area’s characteristics were brought up almost like ‘advantages’ of the community as is, such as:

That last point is poignant, as the proposal included several examples of current homes in the area, such as this with a rather spacious lot:

As well as this beautiful house. 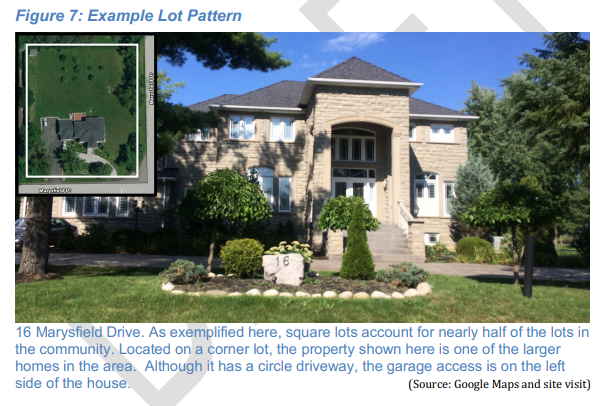 With this being the ‘typical house orientation’. 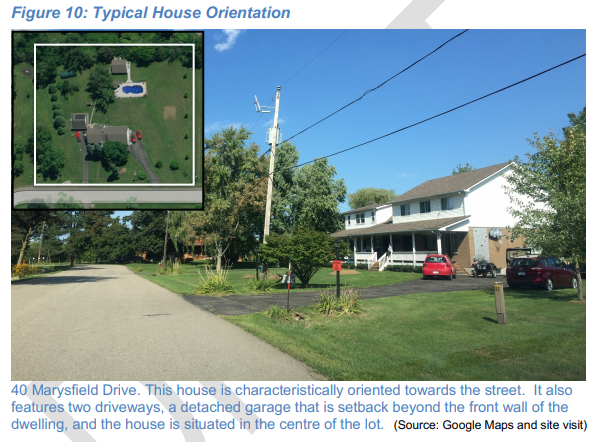 So what are the proposals to ‘keep the character of the neighbourhood’? Some of those proposals include:

Various residents came forward warning about the impacts of development on Marysfield, saying things like “it does not fit in with the patterns and characteristics of the established community.”

Others talk about more specific issues, such as the loss of trees if nothing was done about the pace of development. But there were some who came forward saying they wanted exemptions granted so they can start building.

Vinod Mahesan, who ran for Brampton mayor last fall, said he opposed any sort of heritage designation for the Marysfield neighbourhood because ‘there really isn’t any heritage left there”. And one girl who said she lived there for 20 years said she noticed many long standing houses have been vacant for up to two years.

As Brampton continues to grow as a city, the consequences of that growth will become more evident with even far tucked away neighbourhoods like Marysfield being affected.

Do you think this area should get special protections for its “heritage”?