The man who eventually became known as “Brampton Billy” has thrown his support behind somewhat controversial mayoral candidate Patrick Brown, the former PC party leader who stunned residents when he registered to run for the city’s top job in the summer. 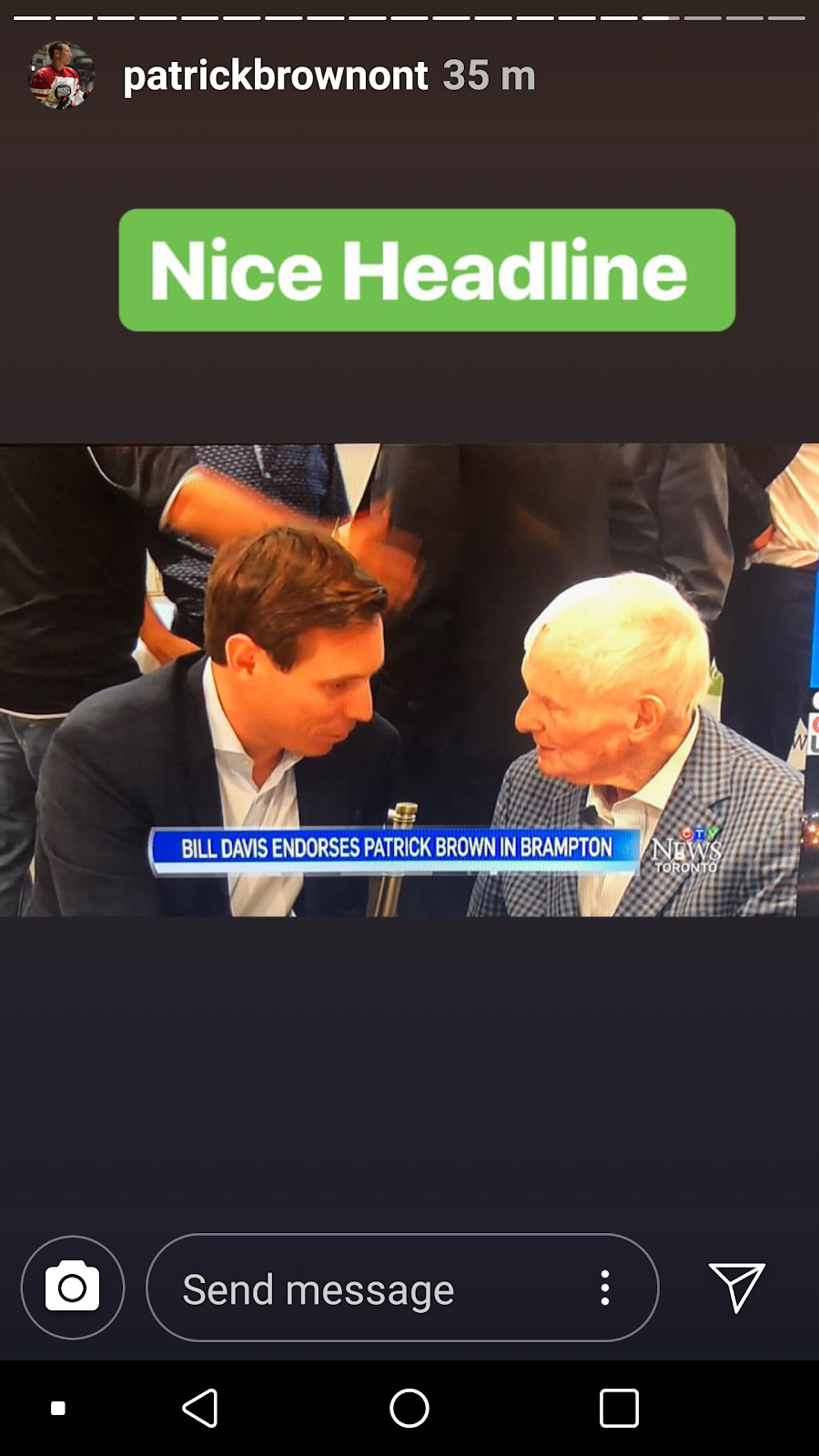 In a recent Instagram story, Brown announced that Bill Davis was throwing his support behind his campaign.

Davis, 89, has long been a fixture in Ontario politics and has a unique connection to Brampton in particular.

He represented Brampton, Peel and North Peel at Queen’s Park as an MPP for 26 years and was Ontario’s premier from 1971 to 1985.

According to the Peel Art Gallery Museum + Archives (PAMA), Davis was born in Brampton and lives in the city to this day. He’s also known for being extremely instrumental in the creation of the busy (and soon to be re-designed) Highway 410.

Davis showed his support for Brown at a campaign rally hosted by the mayoral hopeful and former Peel Regional councillor John Sanderson.

Thank you to Premier Bill Davis for coming out to support @JohnSandersonCA and myself at our campaign rally tonight. He was the greatest public servant #Brampton has ever seen. Honoured to have him by our side tonight! #brampoli pic.twitter.com/YLppcj6NVv

In a tweet, Brown thanked the former premier for coming out to support Sanderson and himself at the rally.

“He was the greatest public servant #Brampton has ever seen. Honoured to have him by our side tonight! #brampoli,” Brown wrote.

Whether this will push Brown ahead of incumbent Mayor Linda Jeffrey remains to be seen, but it’s hard to argue that support from a beloved public figure—even one who has been retired from political life for some time—isn’t valuable.

The support is especially important when considering the fact that Brown has been accused of parachuting into the city after being ousted from the PC party due to sexual misconduct allegations (which Brown has vehemently denied), as well as being forced out of the race for the Peel Regional chair position after Premier Doug Ford cancelled several regional chair elections.

It’s also interesting to note that Mayor Linda Jeffrey, who has been openly skeptical of Brown’s decision to run in the city, has received some support from PC heavyweights, including former PC party president Richard Ciano.

While it’s certainly not that unusual for conservative leaders or strategists to support more liberal-minded municipal candidates (and vice-versa), some have speculated that Ford could be encouraging his people to support Jeffrey in order to better ensure his political foe’s defeat in the Oct. 22 election.

For her part, Jeffrey had this to say about her somewhat surprising supporters in a recent email to inbrampton.com:

“Last night’s event is a demonstration that I am able to work across party lines for Brampton. All 5 of Brampton’s federal Liberal MPs came to my kick off as a demonstration of their support for me. I look forward to continuing my great working relationship with my federal and provincial counterparts to continue to advance Brampton’s interests,” Jeffrey said.

It’ll be interesting to see what happens on Oct. 22.