Brampton councillor hired consultant for over $20,000

The City of Brampton is reviewing what appears to be a loophole in the hiring process for city councillors' offices after one councillor submitted invoices to pay an outside consultant over $20,000 for services rendered to her this year.

During the Governance and Council Operations meeting on Monday, November 4th, they received a report from staff on the hiring of consultants by elected councillors. In January, Brampton councillors approved a new political staff model that doubled councillors office staff at a cost of $1 million.

When asked if they had engaged any consultants within the current term of council, Wards 7 and 8 Coun. Charmaine Williams was listed to have submitted invoices for $10,000. 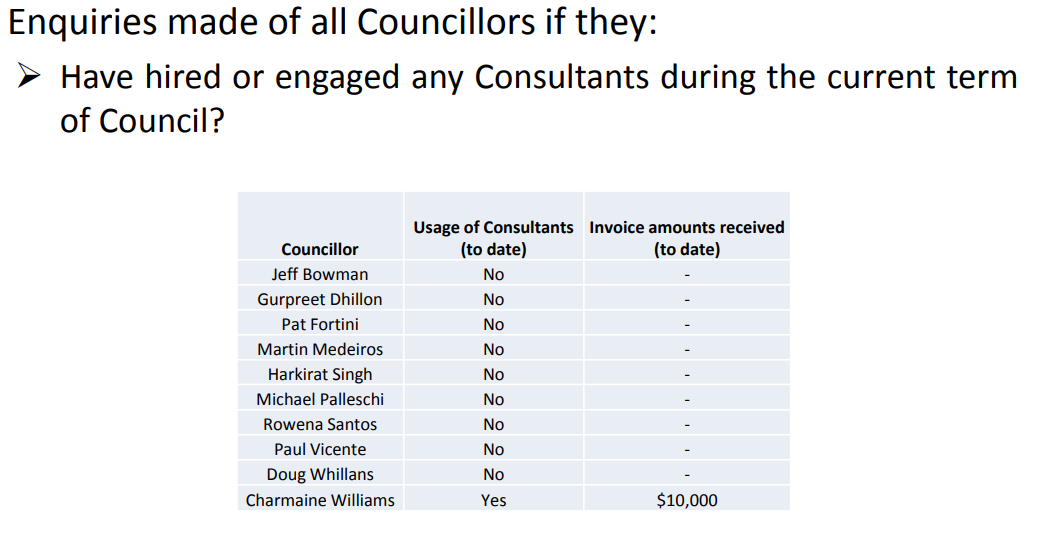 City staff then clarified and said that amount is actually $15,650, but the invoices were unpaid because of some missing HST numbers. According to them, the invoices run from April to October of this year.

Another slide from the staff presentation showed how the consultant would get paid by the city councillor's office.

Staff were also unsure if there is even a contract in place between Williams and the consultant she brought on, as it appeared to be just a 'handshake agreement,' which brought up a question from Coun. Pat Fortini on the need to go into an 'in camera' session, as it is done mainly for confidentiality reasons such as reviewing the hiring of internal staff at the city.

The report also provided examples at other municipalities when it comes to their procedures on how they handle consultants.

Documents obtained by inbrampton.com through a Freedom of Information request showed that the councillor submitted invoices payable to Rob Davis and Associates Inc. during April 15 to November 14 this year. The amounts ranged from $2,000 each for the first five invoices then increased to $5,650 for the remaining two invoices, meaning that a total of $21,300 was invoiced.

Rob Davis is a former Toronto city councillor, and although his Linkedin profile lists him as a consultant, it shows his tenure with 'Rob Davis and Associates' only lasted from 2013 to 2015 and that he is also president of 'Campaign Solutions'. 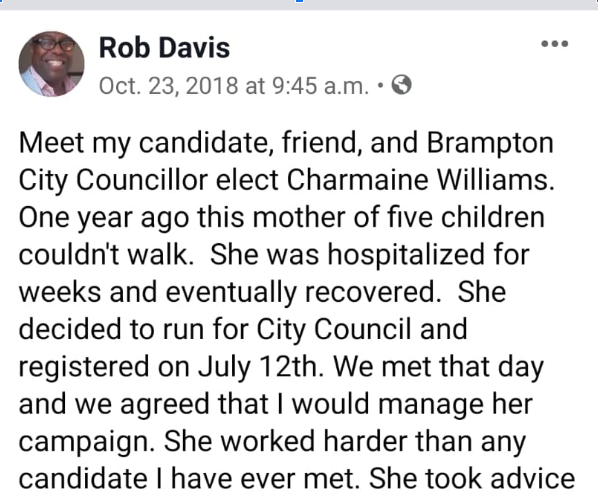 “I look forward to continuing to provide services to the residents of Ward 7 & 8 through your office,” Davis concluded in his memo.

Earlier this year, Davis was present in Williams' council office on the sixth floor of Brampton City Hall when inbrampton.com and other media outlets were invited to a strange press conference where she announced she wanted to "build a political wall" around the GTA to keep out retail cannabis stores.

I recall waiting in the city's official press conference room and later escorted to Williams’ office by Davis, where the 'wall of bricks' was on display.

The whole situation got even stranger when Coun. Rowena Santos showed up attempting to hand me her press release criticizing Williams' plan and looked as though she was prevented from entering Williams' office as Davis appeared to be blocking the door.

Not surprisingly, Santos raised concern during the committee meeting about a consultant's access to councillors' offices on the sixth floor of city hall, as in access to materials and information sensitive to council. "There are concerns with this type of situation," Santos said, adding that she was concerned about 'backroom deals' and the lack of transparency and accountability.

Neither Davis nor Williams’ office, or Williams herself, provided any direct response to inbrampton.com regarding further comment on this matter.

The committee approved a motion to adopt the City of Toronto’s policy for hiring consultants for councillors, freeze any retention of consulting services for councillors pending a staff report and to not pay for the outstanding invoices pending the review.

A staff report to potentially align the retention of consultants with the City of Brampton’s standard hiring practices will be submitted at a later date.