It looks like a prominent plan to revitalize Brampton's downtown has been put on hold for the time being.

Downtown Reimagined is Brampton's plan for a more urban space in the city. According to the downtown Brampton BIA, it will create an "aesthetically beautiful" area from Mill Street South to Chapel Street on Queen Street, and Nelson Street East to Wellington Street on Main Street. 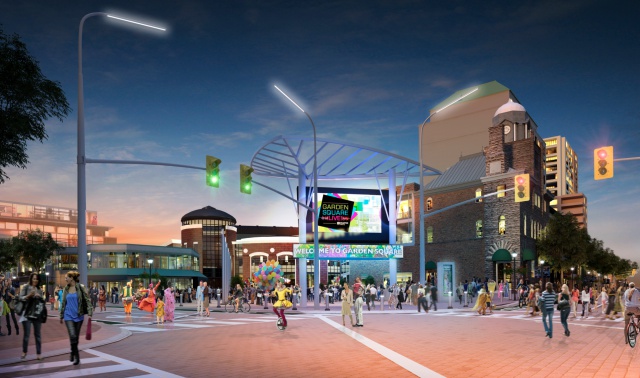 But now that plan may be put on hold, according to Brampton city staff.

Uncertainties have arisen due to the unresolved tender with the Region of Peel, on issues such as the final designs of utilities not completed, and the channel investigation still ongoing.

As of now, the costing of Downtown Reimagined is estimated to be close to $40 million. 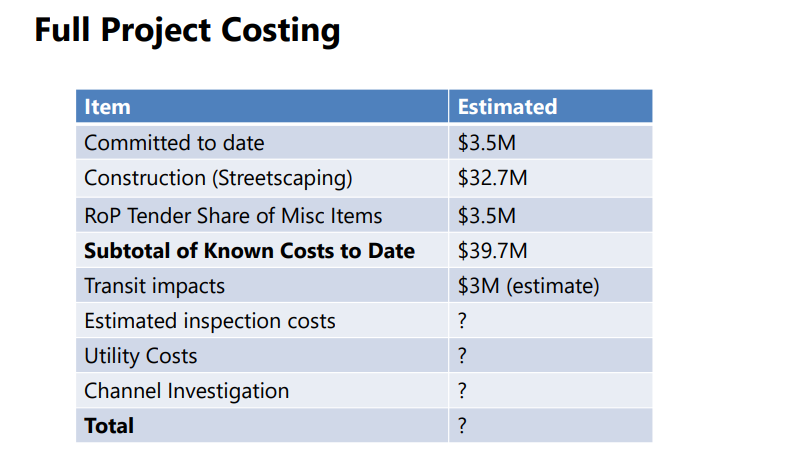 The utilities were estimated to cost $10 million, but as of now it's estimated at $20 to $25 million, and this is because until design is complete the costs are not finalized. 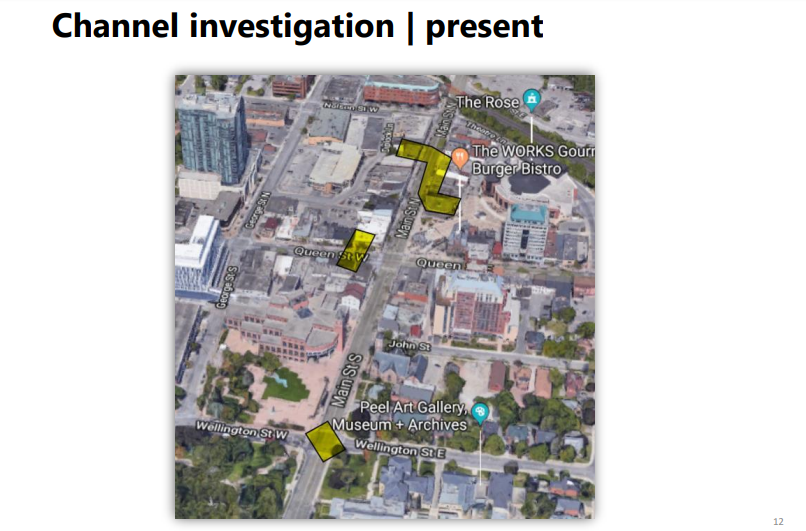 With regards to the channel investigation, a lack of historical information and records has led to uncertainty in the current location and condition, as the latest information was from the 1970s.

A vast part of the channel is also inaccessible, more geotechnical investigation is needed and condition has to be evaluated to determine any remediation.

The recent cancellation of the Ryerson University funding by the provincial government, and the revised LRT motion (which passed as of December 5's council meeting), had also factored into city staff decision making.

Brampton city staff therefore came up with these three recommendations. The first option is to move ahead as planned, but not knowing the full costs. 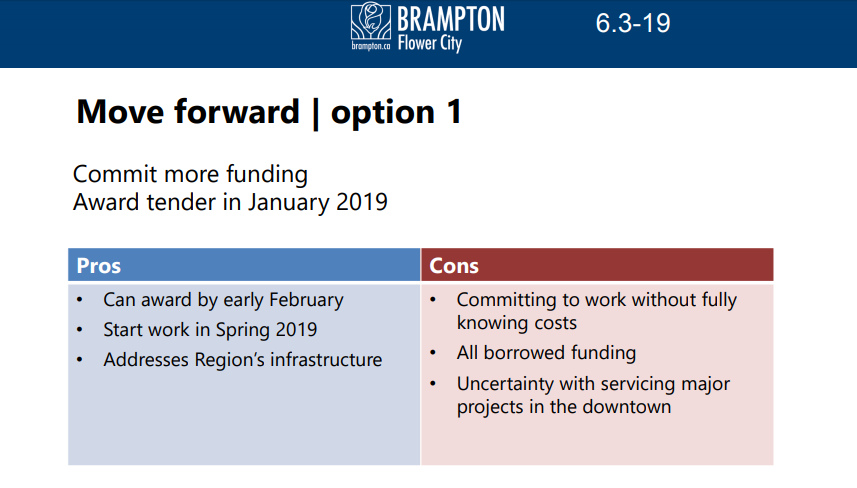 The second option is to pause on the streetscaping but let Peel Region proceed. Staff warned that the Region would withdraw their tender if the city doesn't go along, but they can resubmit in 2019. 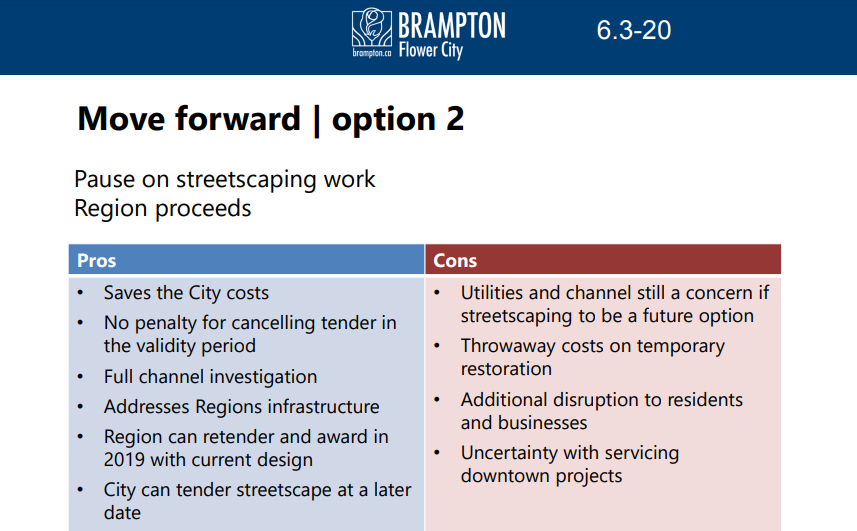 The third option is to pause both streetscaping and the Region's work. 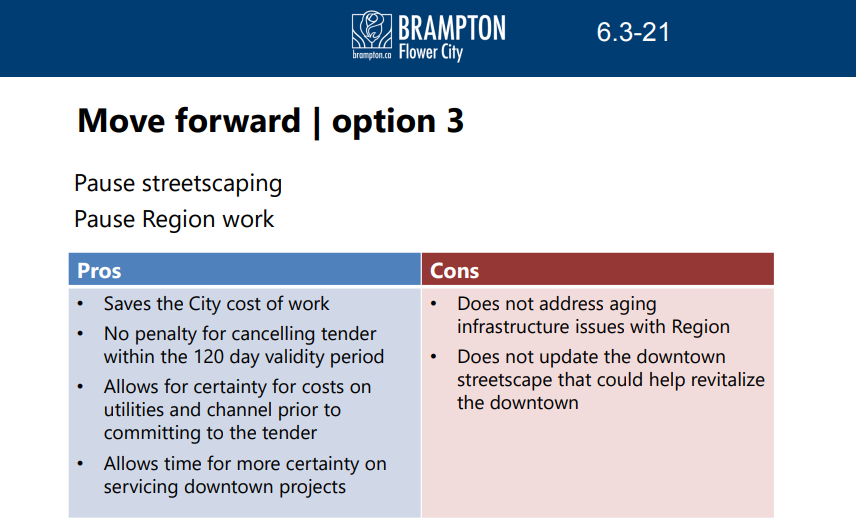 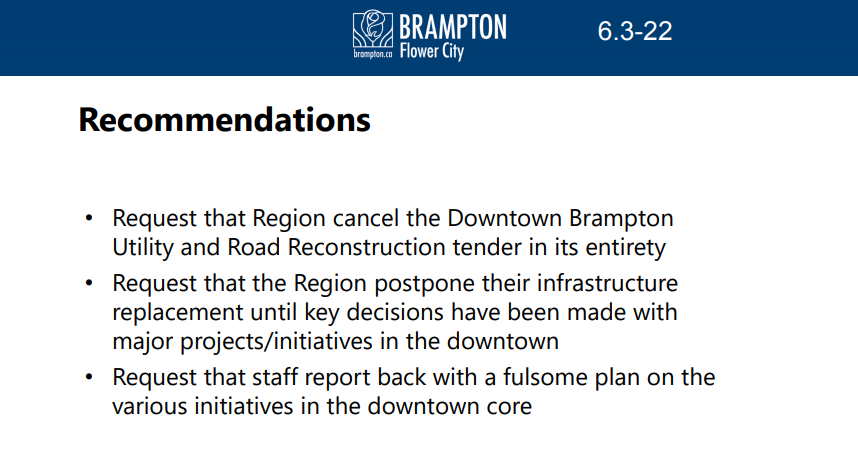 Council approved the staff recommendation to cancel the tender for the downtown project, even as Brampton CAO Harry Schlange reassured that this "pause" is in no way a rescinding of the city's commitment to Brampton's downtown, citing Ryerson's Chang School and continued commitments for post secondary programs.

But one resident came forward with an impassioned speech about the inaction on the downtown area, saying the city should just go ahead and spend the money anyway.

"I've been in downtown Brampton for 35 years, and I'm sick of seeing the rot and the delays in doing something with this place," a business owner Rick said. "This council starts at a value deficit, not leveraging the assets we have (the Rose Theatre, the West Tower). We put more blocks in front of us than actually moving forward."

"Brampton is almost on its way to having 1 million residents, and we don't even have a friggin downtown," adding in response to comments from councillors that they were just looking at costing that 'rarely have I seen a conversation from council about the long term benefits of investing in the city.'

Considering that there is aging infrastructure regardless whether the reconstruction takes place now or a year or two from now, the confusion over the delay is understandable.

Do you agree with the city's decision to postpone on the Downtown Reimagined Plan in Brampton?