Digital payments on the rise during pandemic: survey
Ontario strip clubs, worker advocates say provincial shutdown is unfair
Here's how Brampton residents can learn more about the Shoppers World redevelopment
Get a delicious Thanksgiving meal delivered to your door from The Food District at Square One
CRTC’s undercover shoppers find fault with 1-in-5 interactions with wireless sellers

Road safety has long been an issue in Brampton and Mississauga.

Every year, approximately 6,000 collisions are reported on Peel Regional roads that result in approximately 1,000 injuries and nine deaths.

The Region of Peel is working to change that.

And it's making a huge investment in order to do so.

The Region of Peel will be investing $21.3 million over five years to reduce fatalities and injuries caused by motor vehicle collisions. The investment is part of the Vision Zero plan that was implemented back in December of 2017.

The goal of Vision Zero is to reduce fatal and injury-causing collisions by 10 per cent on Regional roads in five years (2018 to 2022).

At a recent Region of Peel Council meeting, the Safety Strategic Plan was brought forward to showcase how the goal of Vision Zero will be achieved.

Since the end of last year, staff have looked at both historical collision data and connected with the public to decide on the most effective emphasis areas to target in reducing collisions.

When looking at past data, there were a number of emphasis areas that stood out. In the below chart, the fatal and injury-causing collisions at intersections came as the top concern from years of data.

Aggressive driving, distracted driving, pedestrian collisions, impaired driving and cyclists collisions were the top areas of concern that the region hopes to address in its plan. 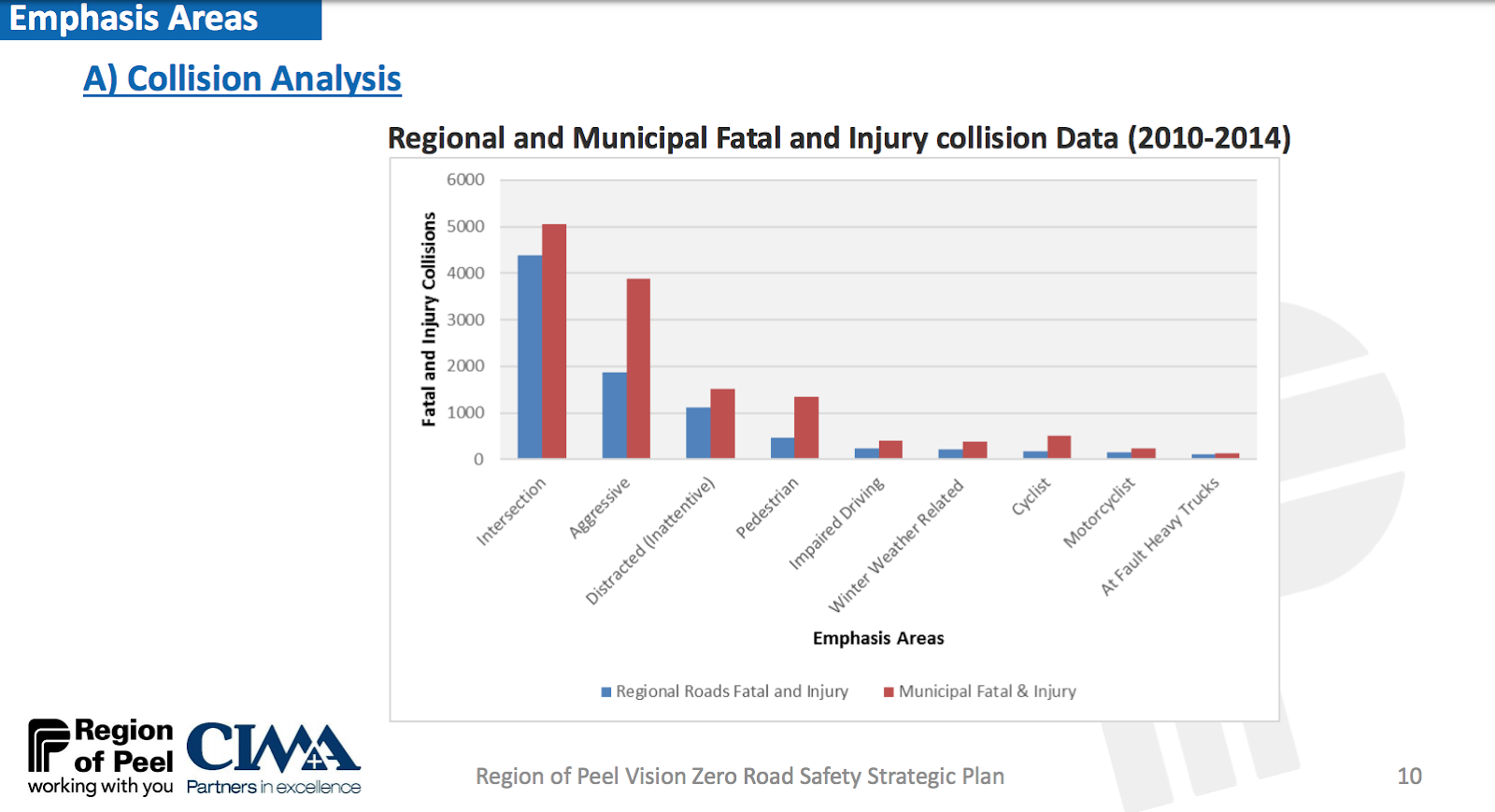 One of the things that was mentioned by Gary Carty, staff sergeant at the Major Collision Bureau with the Peel Regional Police, is that distracted driving is more than the use of cell phones. Some examples that were mentioned were eating and putting on makeup while driving.

Two other areas of concern were truck collisions and school zones. These concerns came from the community and were included in the plan as “awareness areas” rather than specific emphasis areas as determined by data.

There are four countermeasures that will be taken on as part of the plan to ensure road safety: engineering, enforcement, education and empathy.

One of the ways that engineering can help in reducing collisions is implementing roundabouts as opposed to using intersections.

"With the installation of roundabouts, you'll eliminate right angle collisions. So the types of collisions that you have are not as severe," says Joe Avsec, manager of Traffic and Sustainable Transportation at the Region of Peel.

Some other initiatives are shown in the image below such as smart channels, pedestrian crossings, speed cushion, actuated advanced warning beacons and pavement markings. 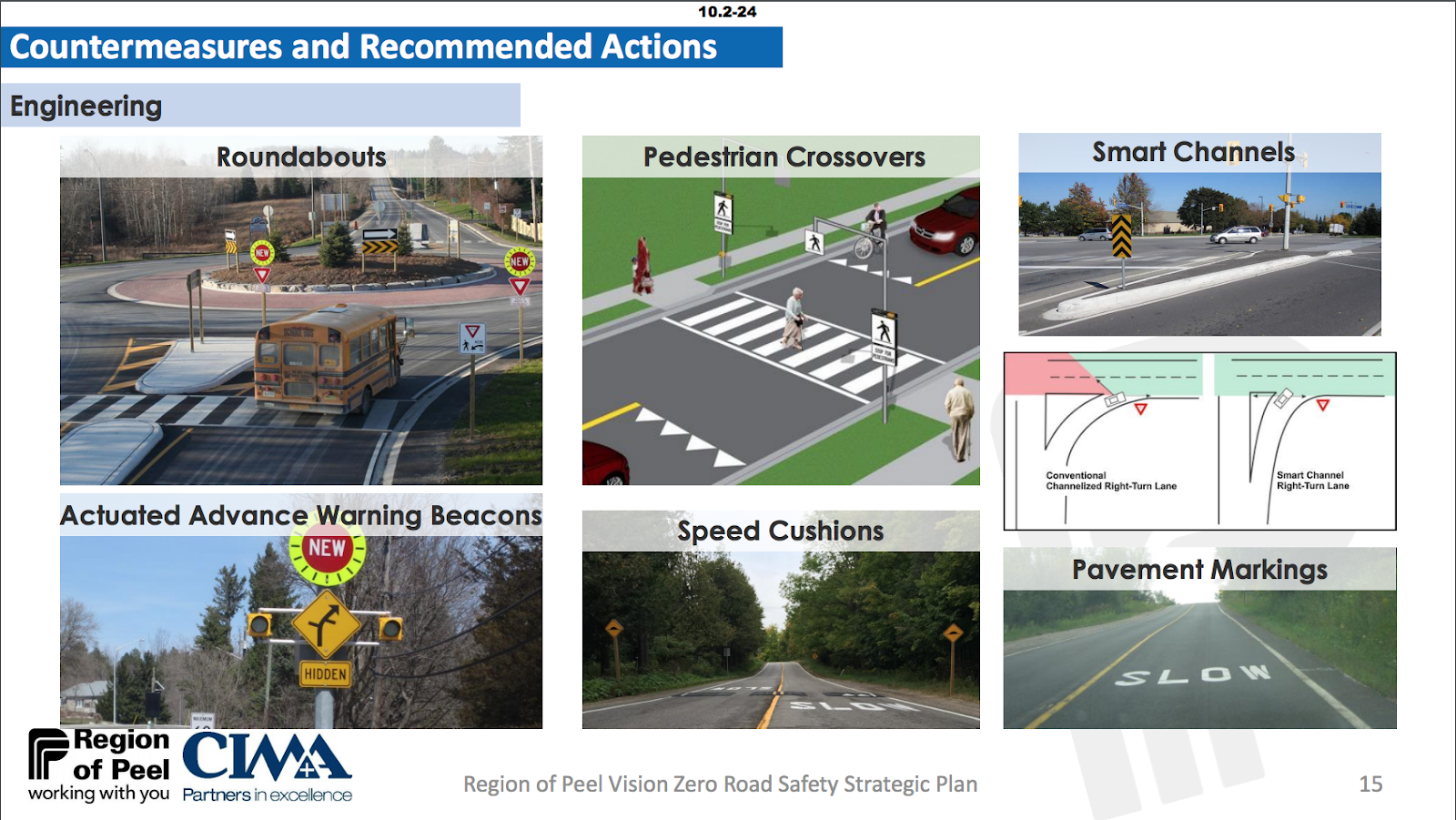 "The education piece has to come through the enforcement part. Some of the areas that are going to be explored are, of course, the red light cameras, enhancing the number and location of those cameras based on the data that we have available to us," says Carty. "We are also obviously looking forward to what's going to happen Provincially with the automated speed enforcement and photo radar." 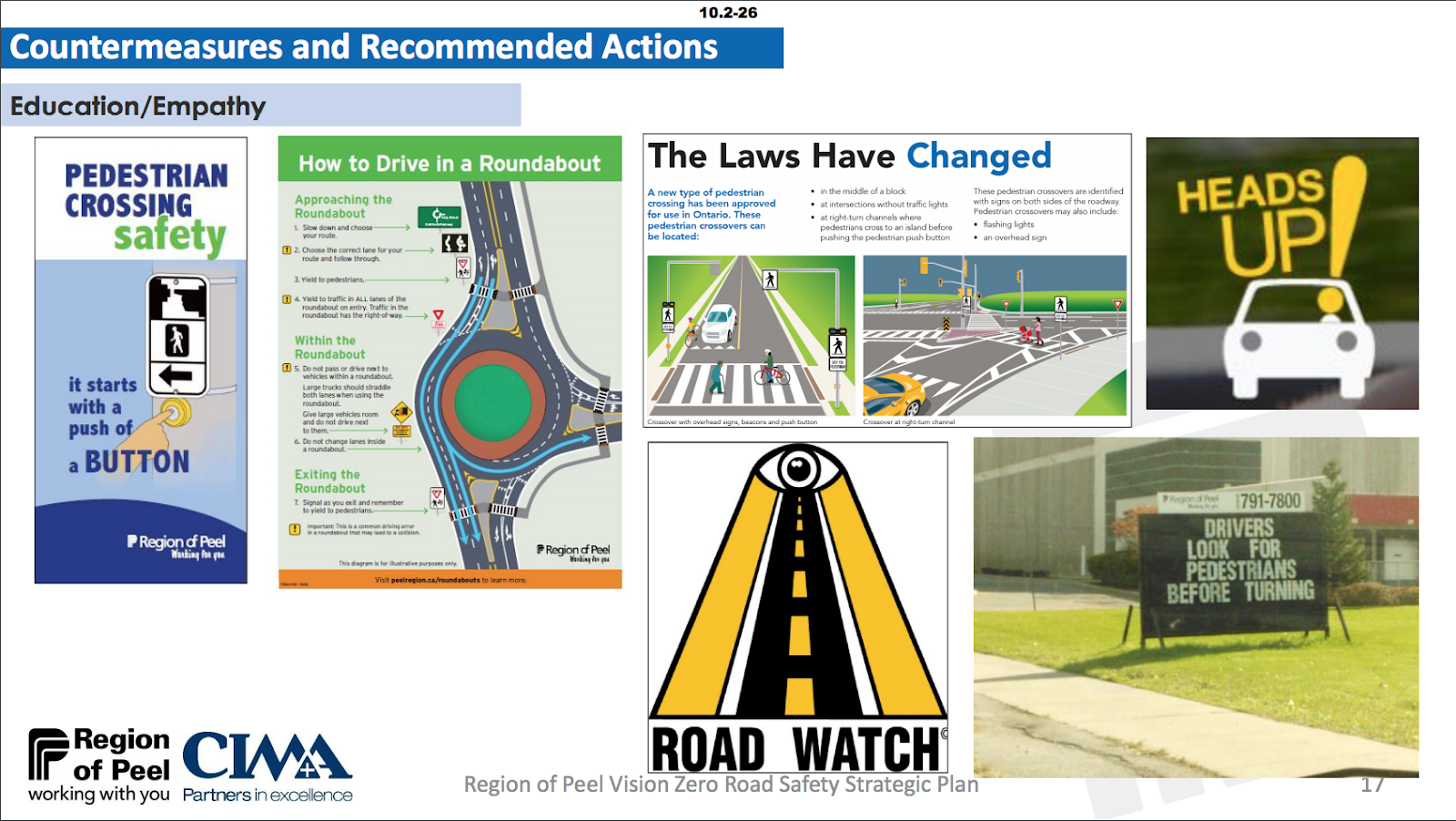 Ward 9 Councillor Pat Saito had some concerns about how Vision of Zero will be implemented as new developments and changes are made.

If new developments are made without Vision Zero in mind, then it would take additional resources to go back and make changes, she said.

"I think if we are going to be adopting Vision Zero, we need to adopt Vision Zero. And everything we build, every new change that we make, we need to be putting in place those safety measures that are going to work to keep our pedestrians and our cyclists safe. And they have to be built in from day one."

To implement the plan, the cost will be $21.3M over five years and the funding will be part of the annual budget process.

“Safety on Mississauga’s roads is the responsibility of the City,” said Saito, who is also chair of the Road Safety Committee. “Vision Zero came about from the belief that no loss of life is an acceptable price for travelling on our roads.”