Brampton is Getting Some Changes in GO Train Service

If you're a regular commuter on GO Transit as you take the train from Mount Pleasant to downtown Toronto, then you're in luck.

The Ontario government recently announced that there will be expanded service along the Kitchener GO line, which services Brampton, Halton Region, Guelph and Kitchener.

Below is a map of the Kitchener GO line. 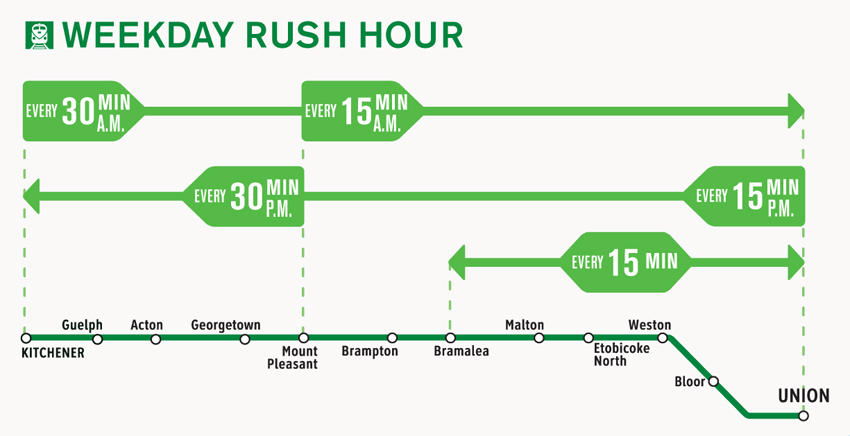 Starting on January 7, people travelling by GO Transit between Kitchener and Toronto’s Union Station will get additional GO train service every weekday morning and afternoon, with a new trip option for customers in Kitchener, Guelph and Acton.

For example, a morning trip that currently begins at Georgetown GO Station will now begin at Kitchener GO Station at 5:40 am., stopping at Guelph and Acton GO stations before continuing to serve all stops to Union Station, arriving at 7:43 am.

The existing trip that currently leaves Union Station at 3:35 pm. and ends at Georgetown GO Station will extend to Kitchener GO Station, stopping at Acton and Guelph GO stations before arriving in Kitchener at 5:43 pm.

“We’re very excited to push our GO Expansion program forward with new GO train service for commuters in Kitchener and Brampton this January,” said Metrolinx's Chief Planning Officer Leslie Woo. “More service means more freedom and more relief from congested roadways. This is the start of more great things to come for our customers on the Kitchener line.”

“We are now increasing service to Kitchener GO by 25 per cent and there will be more news to come,” said Transportation Minister Jeff Yurek. “This is an important step as we continue working with CN to deliver more service and offer two-way, all-day GO train service for people on the Kitchener line as soon as possible.”

Expanding to all day, two way service was announced by the previous Liberal government back in April, with plans for completion by 2024.