There are many people looking to foster and build on a sense of civic pride in their community, and Brampton is no exception.

That is why the city is offering a recognition program for outstanding citizens in our community who have made achievements during 2018. 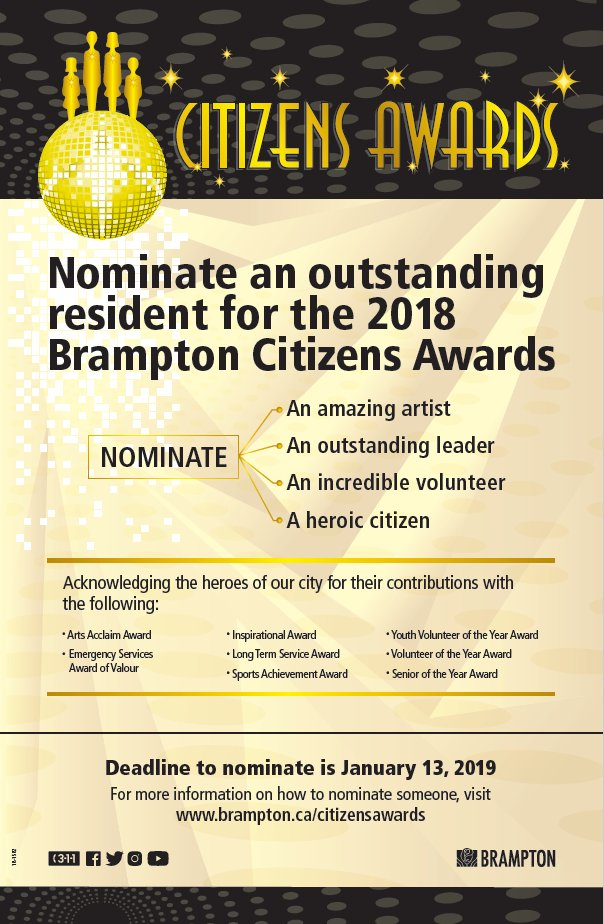 Here are the following categories for the Brampton Citizen Awards:

The Sports Achievement Award recognizes Brampton residents whose achievements have been recognized at the Provincial, National or International level.

The Arts Acclaim Award recognizes individuals whose contribution has had a significant impact in terms of achieving local, Provincial, National or International acclaim.

The Long Term Service Award recognizes dedicated volunteers whose efforts have made a significant impact towards the development and advancement of recreational sports, the arts and community social services.

The Inspirational Award recognizes Brampton residents who advocate or practice humane action, or who have had an inspirational influence on others.

The Emergency Services Award of Valour recognizes an individual or individuals, who voluntarily risked their own life/lives while performing a heroic act to save the life of another person.

The Volunteer of the Year Award recognizes a Brampton Volunteer, as well as a Brampton Youth, who have demonstrated all-round community involvement, rather than a specific activity or contribution. This award recognizes local residents who build communities and who what can be achieved with passion and determination.

The Senior of the Year Award recognizes a Brampton resident over the age of 65, that has achieved specific humanitarian efforts or has demonstrated passion and all-around involvement with community growth.

A Selection Committee comprised of community members with subject matter expertise in each award category, along with elected officials, Brampton Fire and Emergency Services, Brampton Sports Alliance, Brampton Seniors Council and Peel Regional Police is appointed to review all nominations.

The nomination period for the 2018 Citizens Awards is from November 1 to January 13, 2019 . Late nominations and self-nominations will not be considered.

Nomination forms are posted under each specific award category page.

Do you know anyone worthy of such a recognition?