Brampton Makes This Prestigious List as a City of the Future

Lately, the City of Brampton have been talking a big game…and I don't mean just about the Raptors.

A recent Council initiative to implement a Foreign Direct Investment strategy is one part of an overall plan to boost job creation and economic growth in Canada's ninth largest city. There is also talk about Brampton being an 'innovation hub perfectly situated between Toronto and the Kitchener-Waterloo tech triangle'.

Now, some of that big talk and work may be starting to bear fruit.

The FDI Intelligence's list of American Cities of the Future has just been released and Brampton, as well as a number of other Canadian cities, has made the list in various categories. FDI's rankings were based on 218 locations and data collected for these locations under five categories:

Cities in the United States, Canada, Mexico and some in Central and South American were included. Brampton, as well as neighbouring Mississauga, were ranked as 'mid size cities' in accordance with FDI's definition of a city with "more than 200,000 people and a wider larger urban zone of 750,000."

Brampton has made the FDI list for the past eight years, according to the city.

Overall, Brampton was ranked as Number 8 as a mid-sized American City of the Future, while Mississauga came in at Number 1. Other Canadian cities in the top ten include Hamilton, Quebec City and Surrey, BC.

Mississauga comes first in the division's Business Friendliness category, with 60 per cent of Mississauga's total inward foreign direct investment between 2014 and 2018 derived from the US, followed by Germany at 15.9 per cent and Japan at 6.8 per cent.

In terms of the 'Connectivity' category, which is in reference to transportation infrastructure as well as quality of Internet networks, Brampton tops this list. Hamilton comes in second while Mississauga comes in third.

When you think about where Brampton is situated near the network of 400 series highways, the proximity to Pearson International Airport and the number of 18 wheelers you see coming and going throughout the city, it shouldn’t be that big of a surprise.

That nicely segways into another category that Brampton made in the FDI list: the city is in the top 10 at Number 10 when it comes to being 'business friendly'.

Mississauga also tops this list at Number 1. Other Canadian mid size cities on here include Hamilton, London and Quebec City.

The report also included a sixth category known as the FDI Strategy, which was described as only being "a qualitative category and does not feed into the overall result." For this category, there were 56 submissions and while Brampton specifically was not on the list, the city does fall under the 'Toronto Region', which came in at Number 11. 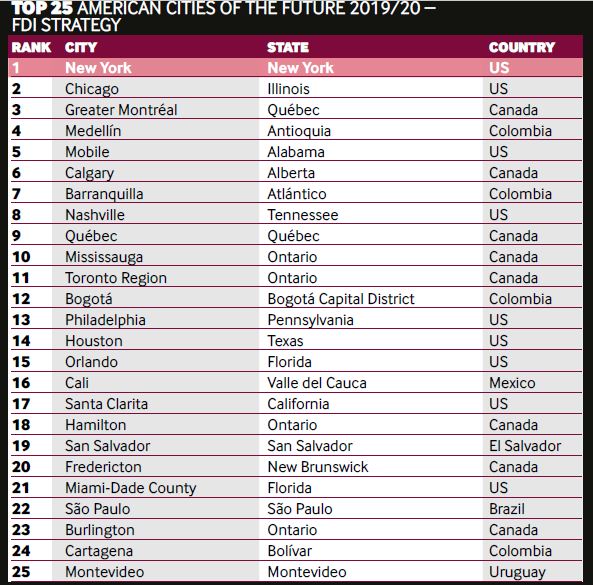 "These awards reinforce Brampton's position as a world-class city and a prime location for global businesses to invest. Our focus on building the types of assets that attract investment and capitalizing on the City's strengths positions us well to compete in the global investment community,” Brampton Mayor Patrick Brown said in a statement.

"This announcement coincides with our new strategy to increase our attractiveness to the global market, and will only assist us in ensuring that Brampton is promoted as a competitive and appealing place to do business,” Brampton Councillor Gurpreet Dhillon added.

Click here to read FDI’s full report on cities of the future.

What do you think of Brampton making this prestigious list?