When it comes to building the next Brampton, many people think about the Hurontario LRT (or what could have been) running from Mississauga all the way to Brampton's downtown before that plan was axed by the outgoing city council.

Nowadays, even though the city is studying alternative LRT routes, there's no guarantee that funding will be in place, especially from the Ford government. The recent cancellation of the funding for Ryerson University's campus in Brampton is indicative of this government's focus on balancing the books.

Development is going to continue in Brampton whether people like it or not, but residents may not know about a major project on the city's books that, if it ever comes to fruition, could fundamentally transform Brampton for generations.

It's called Riverwalk, and it may have more impact on Brampton than the previous infrastructure projects mentioned for the city…because besides an urban development component, the other purpose of it is to help mitigate future flooding. 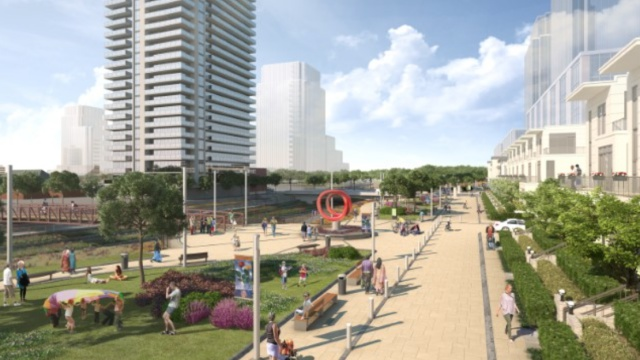 But just in case you're not familiar with Riverwalk, here's a brief summation and history (courtesy of the City of Brampton's GeoHub data portal).

The Etobicoke Creek has always been susceptible to flooding. Case in point: a massive flood in 1948, when the river overflowed its banks and submerged downtown in more than two metres of water. 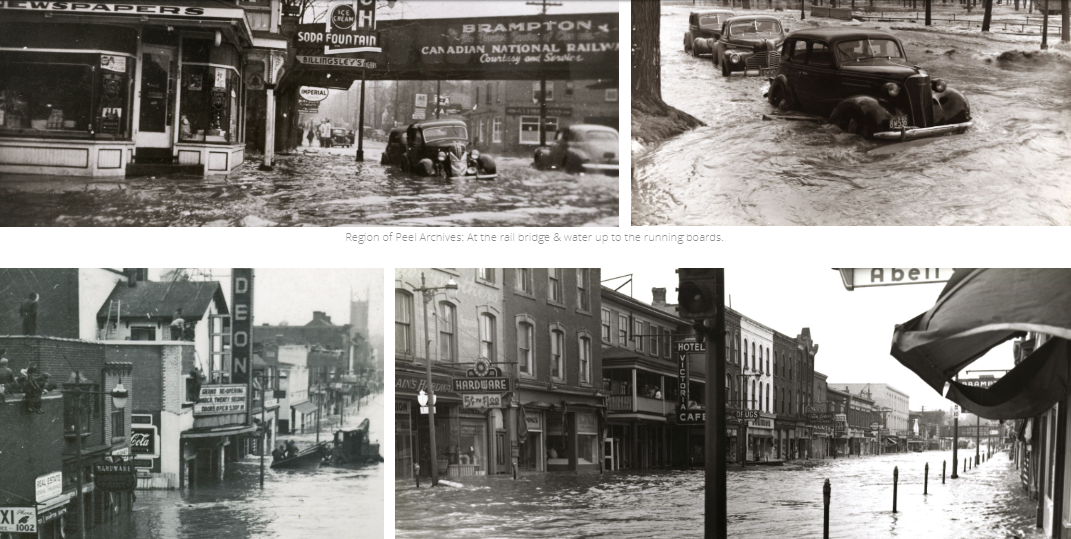 In 1952, the river was rerouted and a concrete-lined bypass channel was built to protect the community. Below is the a map where Etobicoke Creek used to flow through downtown: 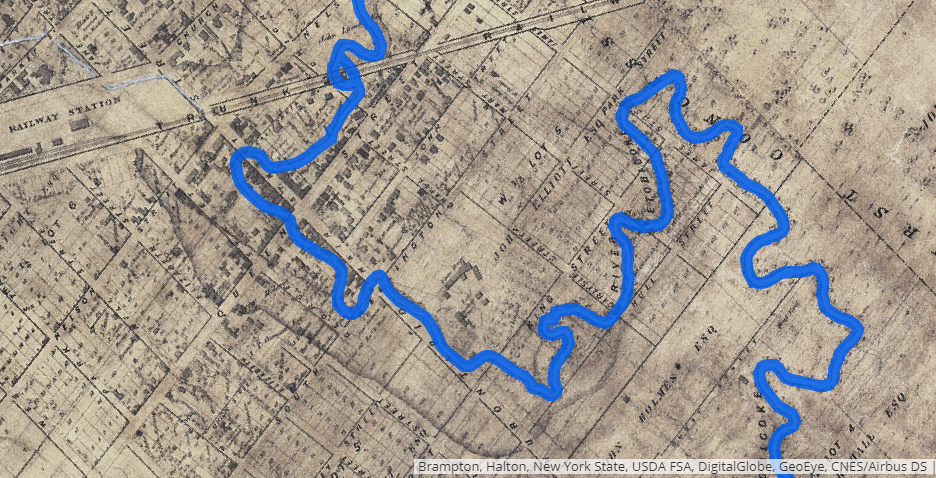 And this is where the current bypass channel exists in Brampton today. 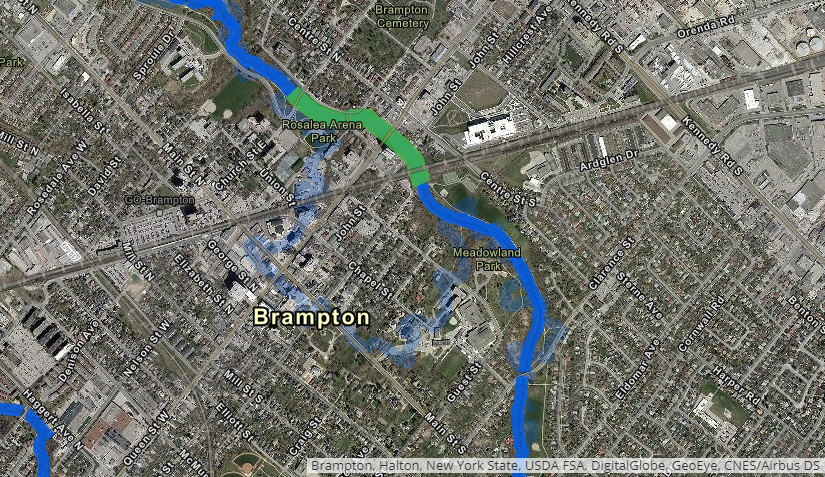 While the flood mitigation purposes of the bypass are still working, as it has for some 70 years, the risk of flooding is still present, particularly in the last few years when massive rain storms have resulted in heavy flooding across the GTA. As the city indicates:

"Think of the area as a bowl… If water were to overflow the riverbanks today, it would find it’s way to it’s old valley (in other words, it would fill up the bowl). So while some development is allowed, there are restrictions on the type and amount."

Currently, downtown Brampton has been designated by the province as a 'Special Policy Area', which recognizes that the area lies within the floodplain but does limit development opportunities.

However, feasibility studies have shown that it is possible to eliminate the flood hazard by re-configuring the channel to provide more room for flood waters and potentially constructing a structure that will cut off flows to the downtown core.

Overall, the main thing Riverwalk is as much a flood mitigation measure as it is about opening up additional land for redevelopment. By combining both goals Brampton has a unique opportunity to do development in a different way that is long term and sustainable. 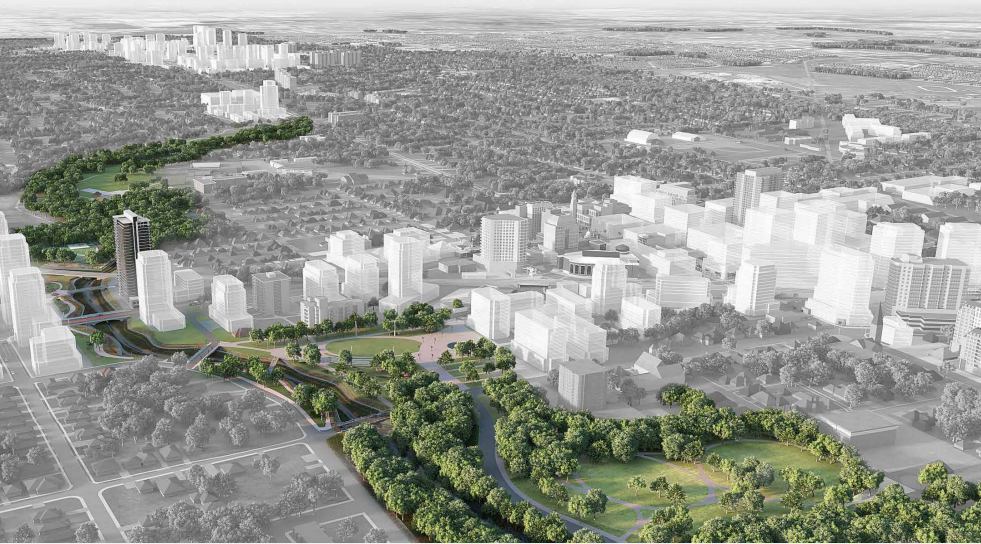 Through urban design and strategic land use planning the public will be able to "come back to the river", to enjoy a naturalized, safe and accessible watercourse: a completely new public realm and transformed downtown, the city says.

The Environmental Assessment for the 'Downtown Brampton Flood Protection Project' began this year, with a scheduled completion and public review by 2020. The city hopes construction can commence by 2021 with an anticipated finish date by 2025.

There was a public presentation and question and answer session held back on November 7 on the downtown flood protection ara (you can watch the entire presentation or view the display panels). Another public meeting is scheduled for early 2019.

However, the more pressing concern with regards to the future of Riverwalk is funding. Rob Elliott, the City of Brampton's Planning Commissioner, has said discussions are continuing in terms of getting money to fund Riverwalk from either level of government. Mayor elect Patrick Brown spoke more about cutting red tape and getting more business into Brampton, but did not specifically address Riverwalk during the election.

It's not as though development is avoiding the downtown Brampton area; this latest application to build a 17 storey condominium building on Scott Street is evidence of that.

As the new council gets ready to assume office next week, they should keep Riverwalk in mind as a major development project for the city, not only for downtown revitalization but also to provide a long term solution to flooding in Brampton, especially if it fits within the Vision 2040 framework.

But it's also up to Brampton residents to keep their elected and city leaders accountable if this project is to become a reality.

Do you think Riverwalk can become a reality in Brampton?