Check Out These Brampton Superheroes

Brampton already has a crimefighter of sorts in Brampton Batman, whom if you're lucky enough can see out on patrol during certain hours.

As great as this local personification of Bruce Wayne's alter ego is, perhaps he would be inclined to get some help along the way.

Heroes of the World is a project created by two Canadian artists, Mark Williams and Joe Bonsu assisted by business manager, Shawn Cuffie. They drew superheroes for every country in the world and have recently started branching into ones for each province and every Canadian city, as well as in the United States.

When it came to Brampton, Williams and Bonsu came up with these colourful characters: 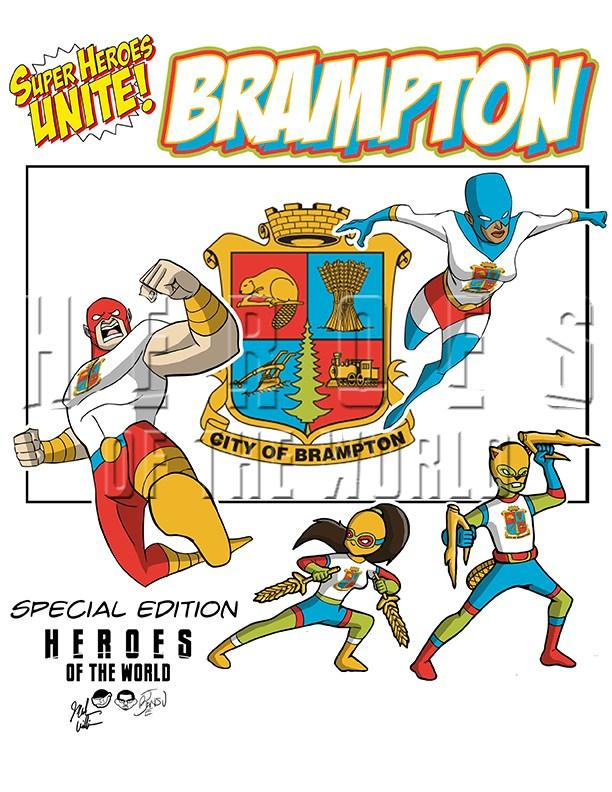 As you can see, that is the City of Brampton's official crest with four superheroes inspired by certain aspects of the crest (such as the beaver and the grain sheaf), and what appears to be a muscular male figure and female superhero in blue who were inspired by the entire crest itself.

There are also superheroes for various other Canadian cities such as Mississauga, Hamilton, Toronto, Montreal, Ottawa, Vancouver, Winnipeg, provinces such as Saskatchewan, Ontario and Manitoba…and of course, Canada itself and the United States.

Heroes of the World are also recipients of the TrailBlazer Award 2015 Black Arts & Innovation Expo.

If someone is bold and innovative enough to dress up like Batman in Brampton, who is to dispute that these four crime fighters wouldn't make an appearance in the city sometime down the road?

Also, what do you think their names should be?