Tributes and accolades poured in from various dignitaries for one of Brampton’s most famous citizens as Mayor Patrick Brown presented former Ontario premier Bill Davis with the Key to the City in a ceremony at the Rose Theatre on Monday, November 25. 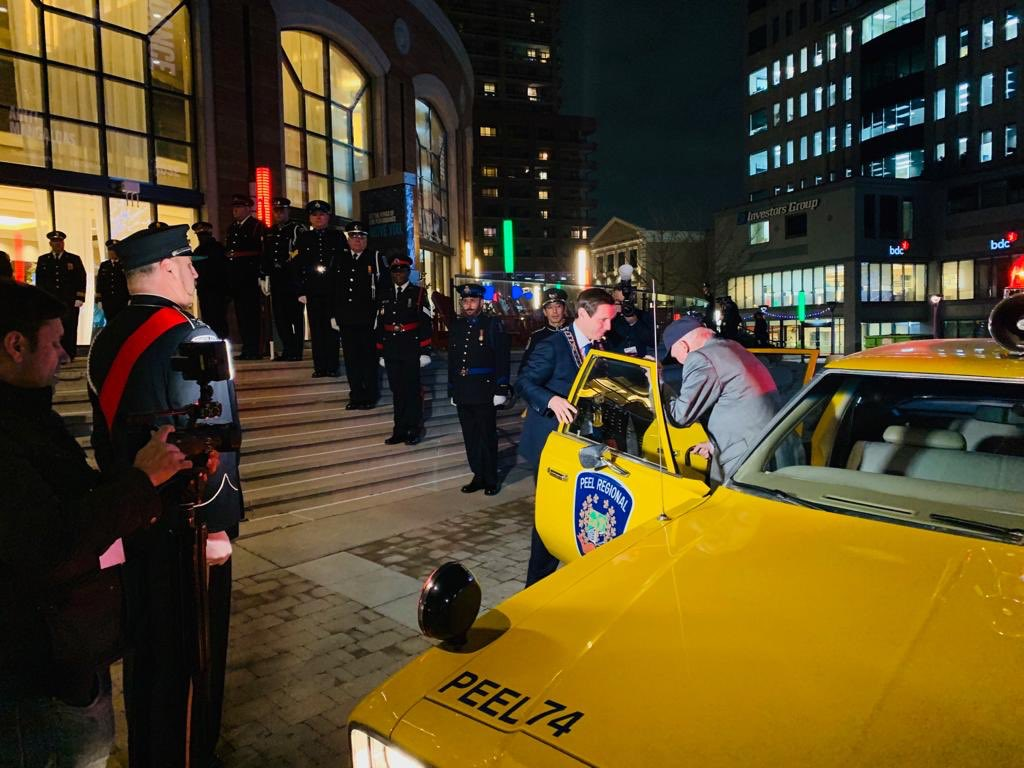 A celebratory vehicle procession transported the 90 year old Davis, from his home in downtown Brampton south of Gage Park, along Main Street to the Rose for the start of the ceremony at 7 pm. 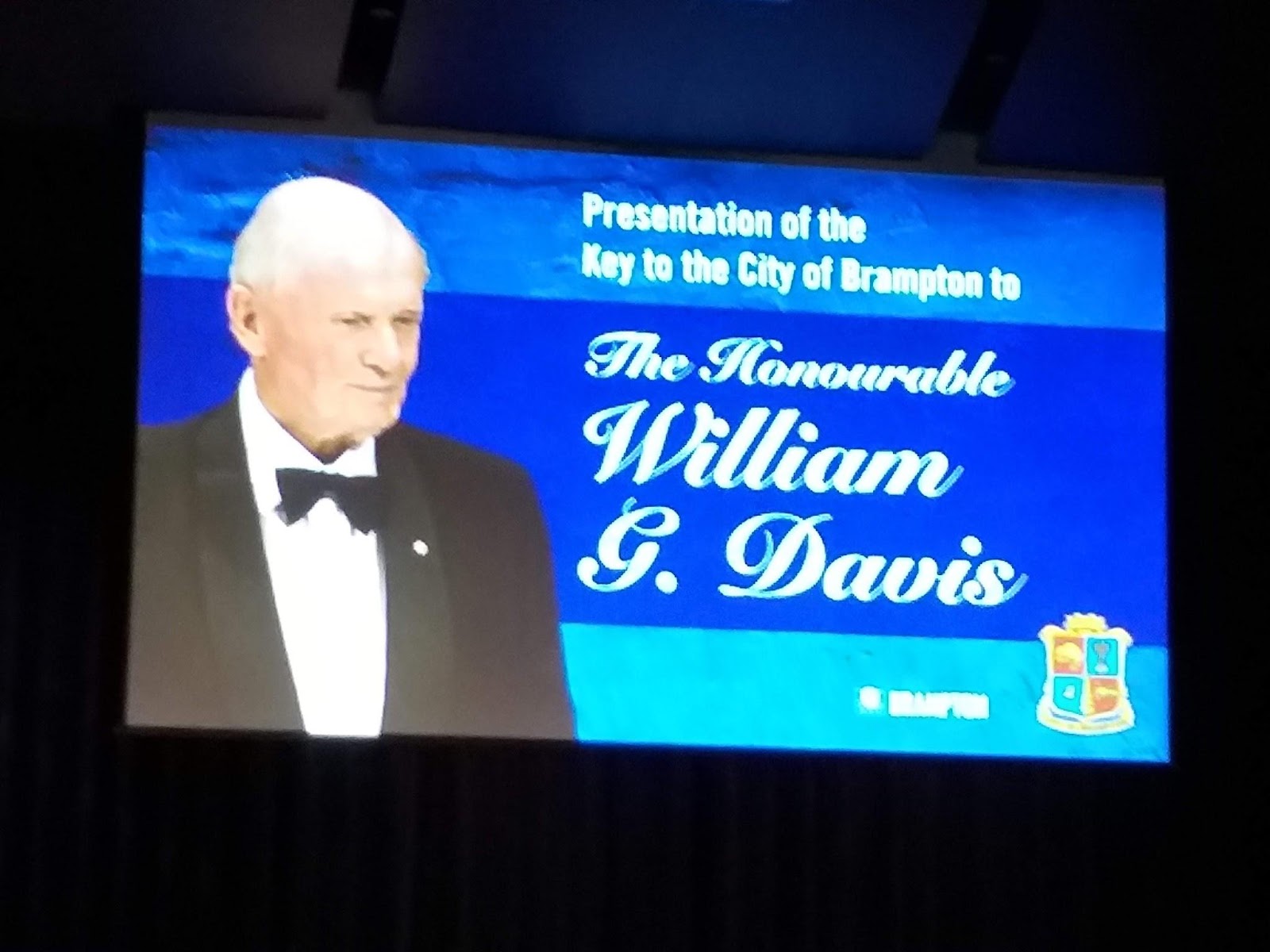 Tonight, I had the incredible honour to present the key to the @CityBrampton to my friend & mentor @WilliamGDavisPC. #Brampton Bill set the gold standard for decency, honesty & integrity in politics. His legacy of accomplishment is unmatched in Ontario history. #onpoli #cdnpoli pic.twitter.com/RvIq6PW4rE

Davis was the Progressive Conservative premier of Ontario from 1971 to 1985. He was first elected as MPP from the then riding of Peel, (and later Brampton) in 1959, and became the province’s youngest Education Minister in 1962.

Under Davis’ tenure as minister and premier, the community college system in Ontario was created and post secondary education was expanded, the provincial environment ministry was created, regional government was established (an issue which created recent headlines to this day) and he took a central role in negotiating Canada’s constitutional accord in 1982.

But throughout his long political career, Davis would always invoke Canada’s ninth largest city, his hometown for more than 60 years. It was often said any Davis speech would have to invoke ‘Brampton’ at least three times. 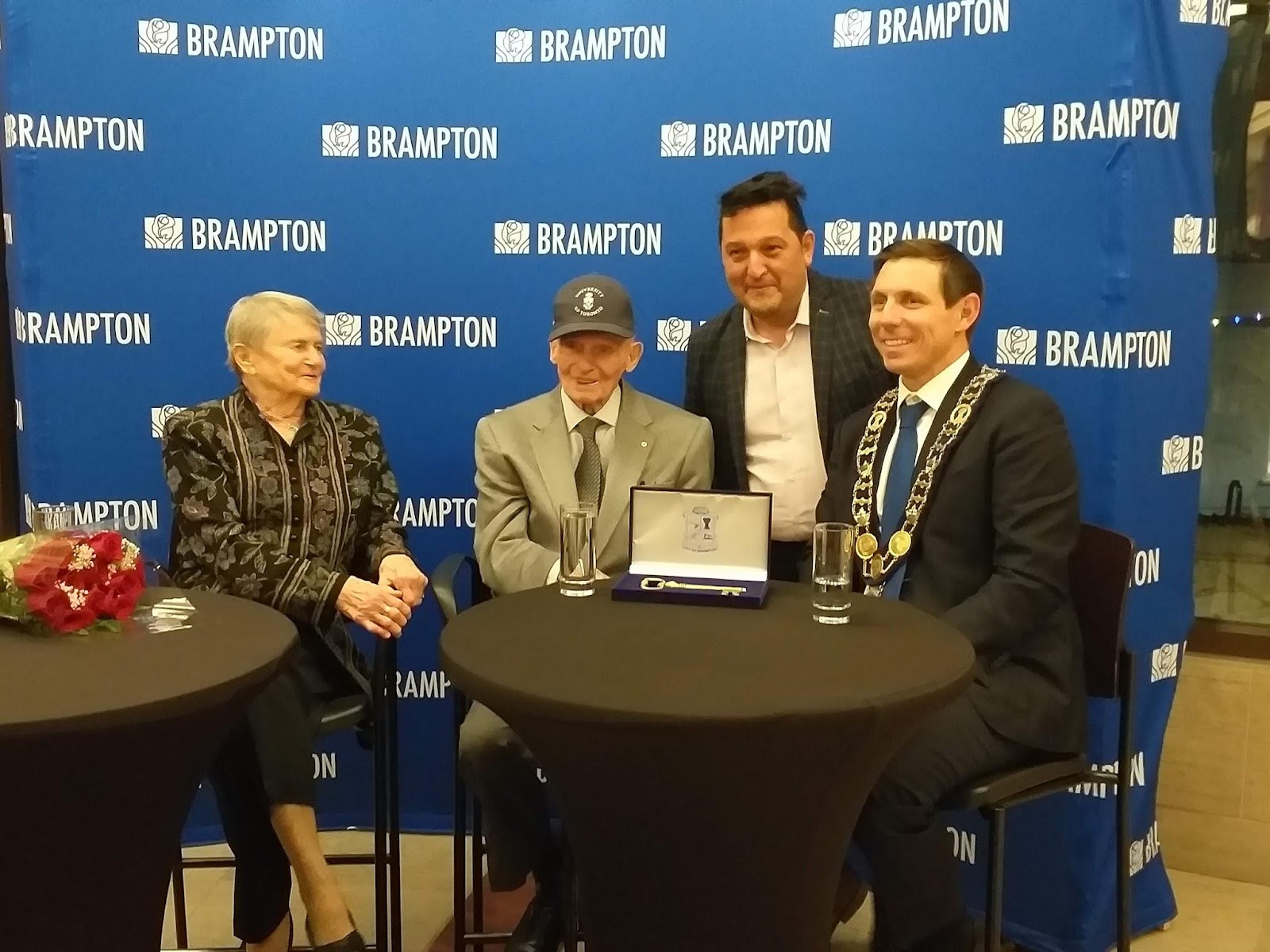 “Brampton Bill has taught me about how to be collaborative around the council table,” Brown said, bringing up Davis’ early life, political career and work in education. The mayor often spoke of Davis as being his personal political model and how his style of moderation and inclusiveness was sorely missing in today’s political discussion.

“He ran one of the most modern, progressive governments in Ontario and brought a healthy dose of small town values while in office,” Tory, who began his own political career as a staffer for Davis at Queen’s Park, said. When Davis became an MPP, Brampton’s population was barely 10,000 people.

“We need more Bill Davies. The message sent should be that there is strength in working together and respecting minorities and those who are struggling,” Tory added.

Former Mississauga mayor Hazel McCallion, who often clashed with Davis during the negotiations on forming regional government in the 1970s, echoed those sentiments and “thanked” the former premier for “giving her” the opportunity to become Mississauga mayor. McCallion was the mayor of what was then the town of Streetsville which was amalgamated into the new City of Mississauga in 1974.

Davis, who is known for whitty sarcasm in his many speeches, said he enjoyed knowing Brown for the last two years as the mayor often sought his advice on various issues and looked forward to seeing him become a federal MP again and then prime minister.

According to the city, the key is “a symbolic honour bestowed upon a highly valued member of the community or a celebrated or dignified guests of the city who made a significant impact on the lives of Bramptonians. It is presented at the discretion of the sitting mayor.”

Since Davis retired in 1985 after serving as premier, one might wonder why it took so long to bestow this honour, as there were three other mayors before Brown. The immediate past mayor, former Liberal MPP Linda Jeffrey, was endorsed by Davis (as was Brown, ironically when he defeated Jeffrey).

But Jeffrey during her term appointed Davis on an advisory panel to figure out a plan to bring Brampton a university, so perhaps it would be too much to give a key to the city to someone actively advising the mayor on a major public policy matter.

That, and the fact that Jeffrey and Davis had a major public disagreement over the route of the Hurontario LRT may have had something to do with deterring the previous mayor from giving the living Brampton legend such an honour.

If there is anything we can learn from Davis’ political career, whether the application can be made in Brampton or beyond, is that in this turbulent world of tribal and populist politics there needs to be room for a more collaborative, if not competent, style of governing that thinks beyond ideology and just does what makes sense.

Bill Davis exemplifies much of that style that seems lost today.