Could Brampton See A Housing Shortage In The Next Two Decades?

Worriesome troubles may be ahead, as some municipalities may see a shortage of housing units being built for a striking reason.

According to a report commisioned by the Residential and Civil Construction Alliance of Ontario (RCCAO), current population targets for cities in the Greater Toronto and Hamilton Area are fast outpacing the ability to make sufficient housing.

"Currently, the mix of housing supply in the Greater Toronto and Hamilton Area (GTHA) is insufficient to meet the future requirements envisioned in the Places to Grow (P2G) Act," said the report.

With the recent implementation of a new Local Planning Tribunal Act (LPAT), which gives municipal governments more power for community planning and development, a continuation of current building trends is expected to lead to inadequate housing supply for the future.

This prediction is estimated to result in about 7,200 dwellings per year not being built by 2041, to about a loss of $1.95 billion in GDP, regardless of dwelling type.

One of the mainstay challenges identified in the report was that of housing density, specifically the lack of medium-density housings. This was defined as a context-dependent concept, as in units being the most varied, comprising townhomes, multiplexes and other multi-unit housing types.

Brampton is one of the cities in Peel that has the lowest in medium and higher density housing formations. 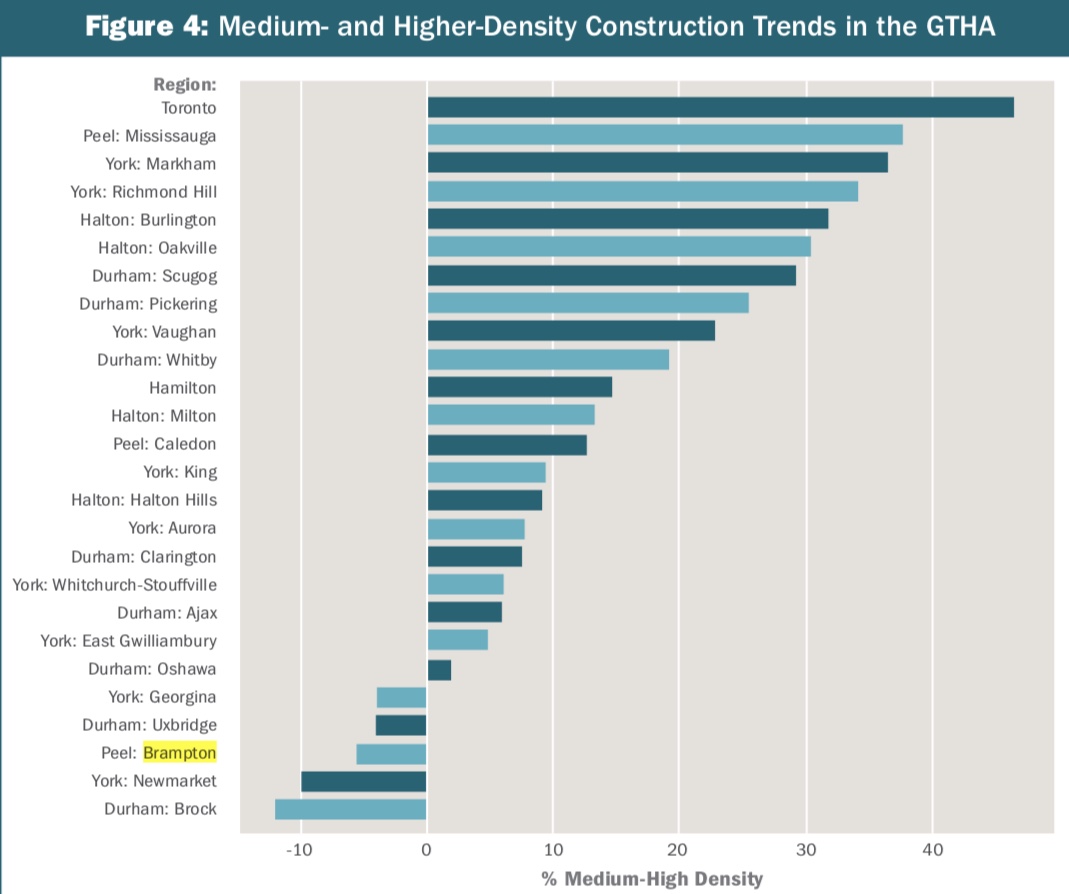 The report indicates that Peel region is expected to be under more pressure to meet the projected future populations in medium to higher density housing. If not, it will result in a disproportionate amount of land used for low-density development.

This in turn will result in more households facing shelter unaffordability and lower quality of life standards in housing units that do not meet their needs, if trends are not acted upon to meet population figures by 2041.

What's important to note is that, when compared to Mississauga, for example, Brampton has much more flexibility in land use and suitability constraints in regards to development, which implies more land is available.

However, it's still part of the holistic picture the report paints of the challenges that municipalities like Brampton face as a whole.

The report concludes that municipalities should develop strategies to slwoly but steadily increase their rate of development, in order to avoid a future demand shortfall. Though there remains a degree of uncertainty in the LPAT process, approval of processes could be faster and more transparent under it.

What are your thoughts on the report as a whole?