A recent public meeting hosted by the property manager RioCan on the future of Shoppers World in Brampton could be the first step in transforming the long standing mall into a new mixed use community that could become the new hub for Brampton in the future. 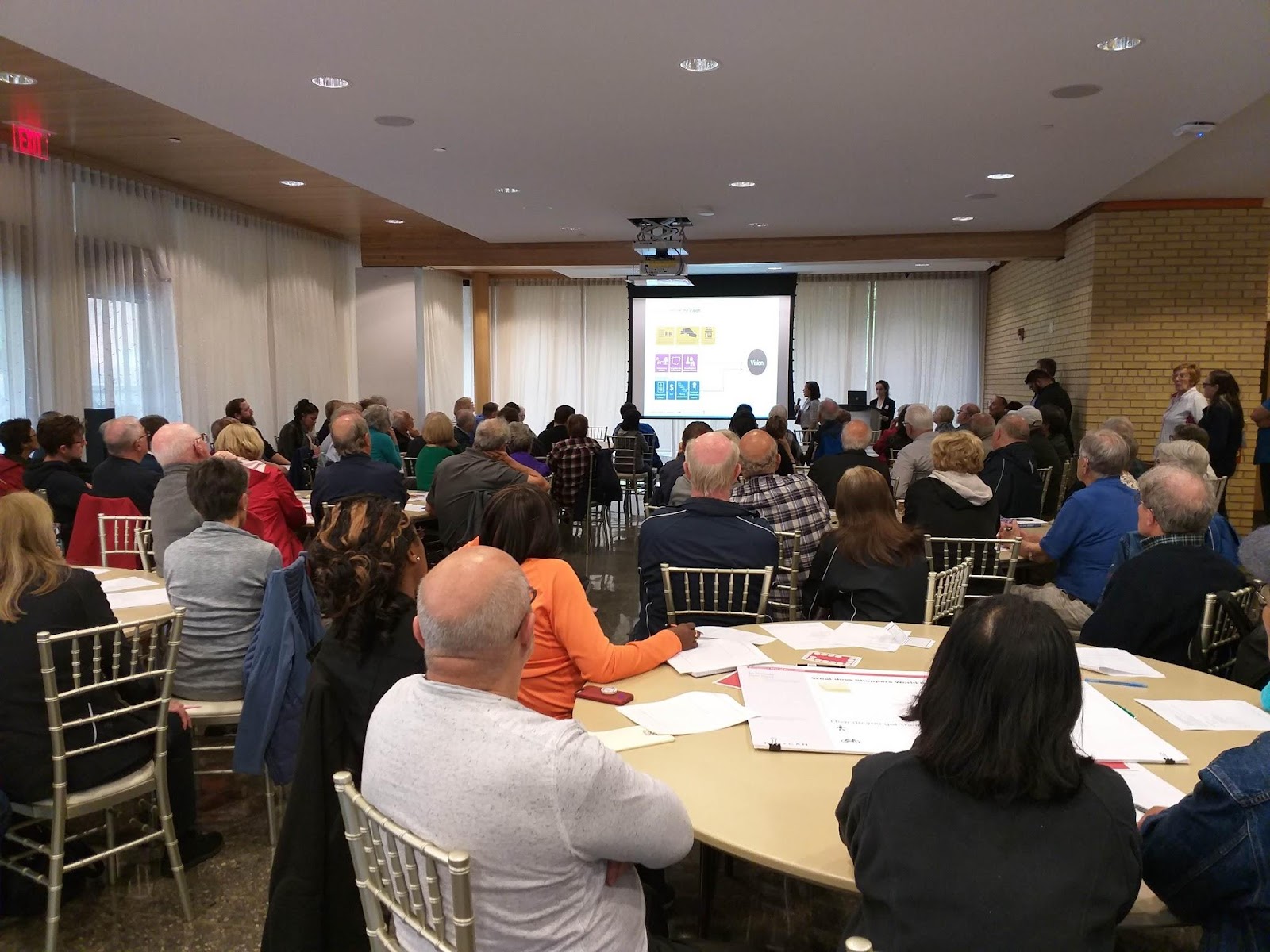 Scores of residents packed into The Alderlea House in downtown Brampton to hear a presentation from RioCan on their plans for the property, as well to gauge feedback on what could be improved on or included. 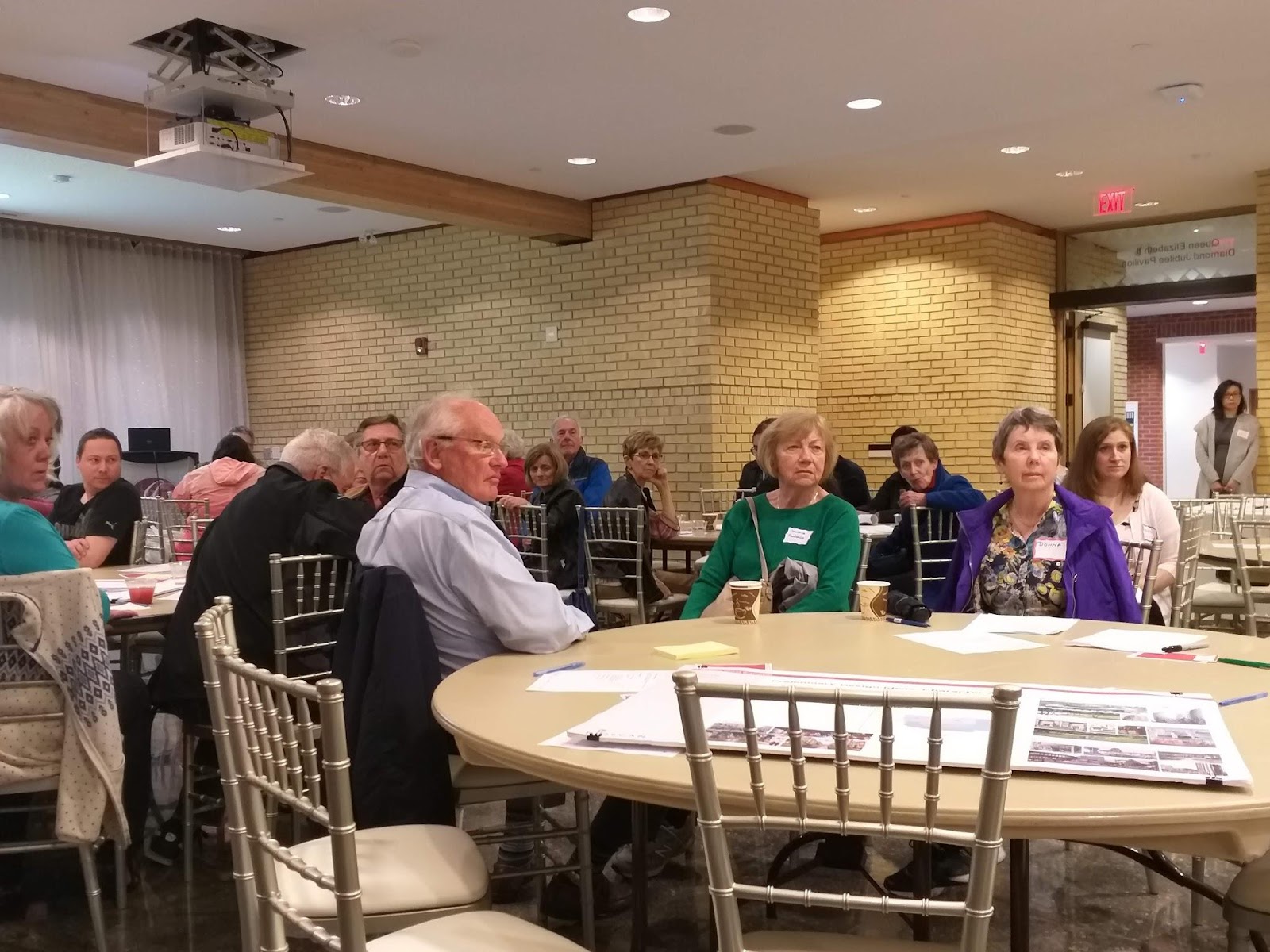 Considering that the lowest average age in Brampton is 36, according to statistics gathered by the city for 2018, the crowd that attended the presentation and stayed for the subsequent roundtable discussions decidedly did not reflect that number.

The meeting was organized only by RioCan without involvement from the City of Brampton  as of yet. RioCan used this meeting to gather information so they can submit a formal application to planning committee.

Unlike some of the other malls around Brampton, like Kennedy Square, the Brampton Mall and Centennial Square, Shoppers World is still a hive of activity with the frequently used Gateway Transit terminal and a big component of the Brampton 2040 visioning document, but RioCan expressed the challenge is how to phase in redevelopment while maintaining the retail presence.

In terms of the overall long term vision, RioCan put out various familiar themes when it comes to redeveloping suburban shopping malls of this nature, such as building "transit oriented" communities, a retail destination and high quality 'public realm'. 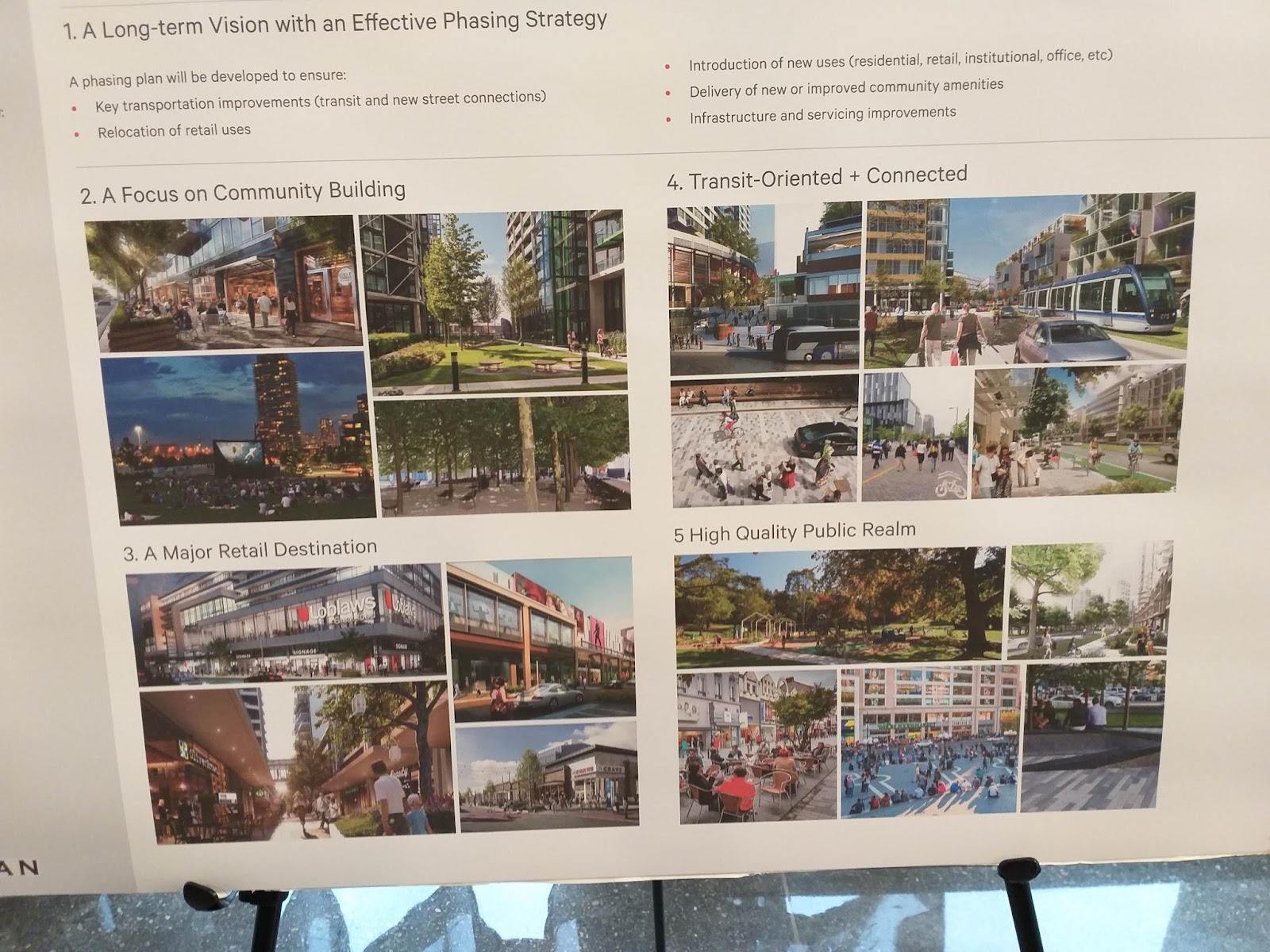 Members of the public were encouraged to put dot stickers on the proposals presented by RioCan of what could take shape at Shoppers World. 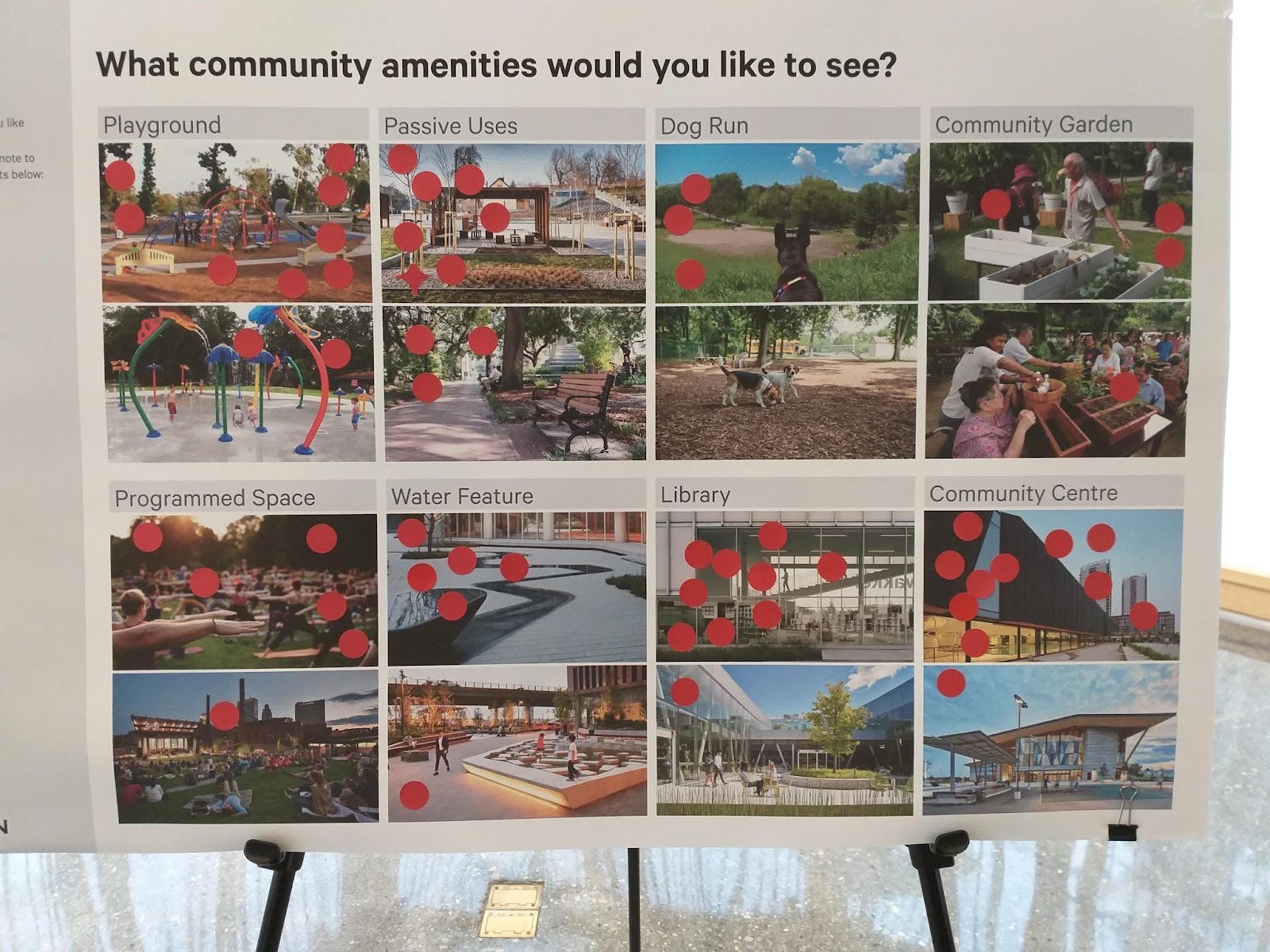 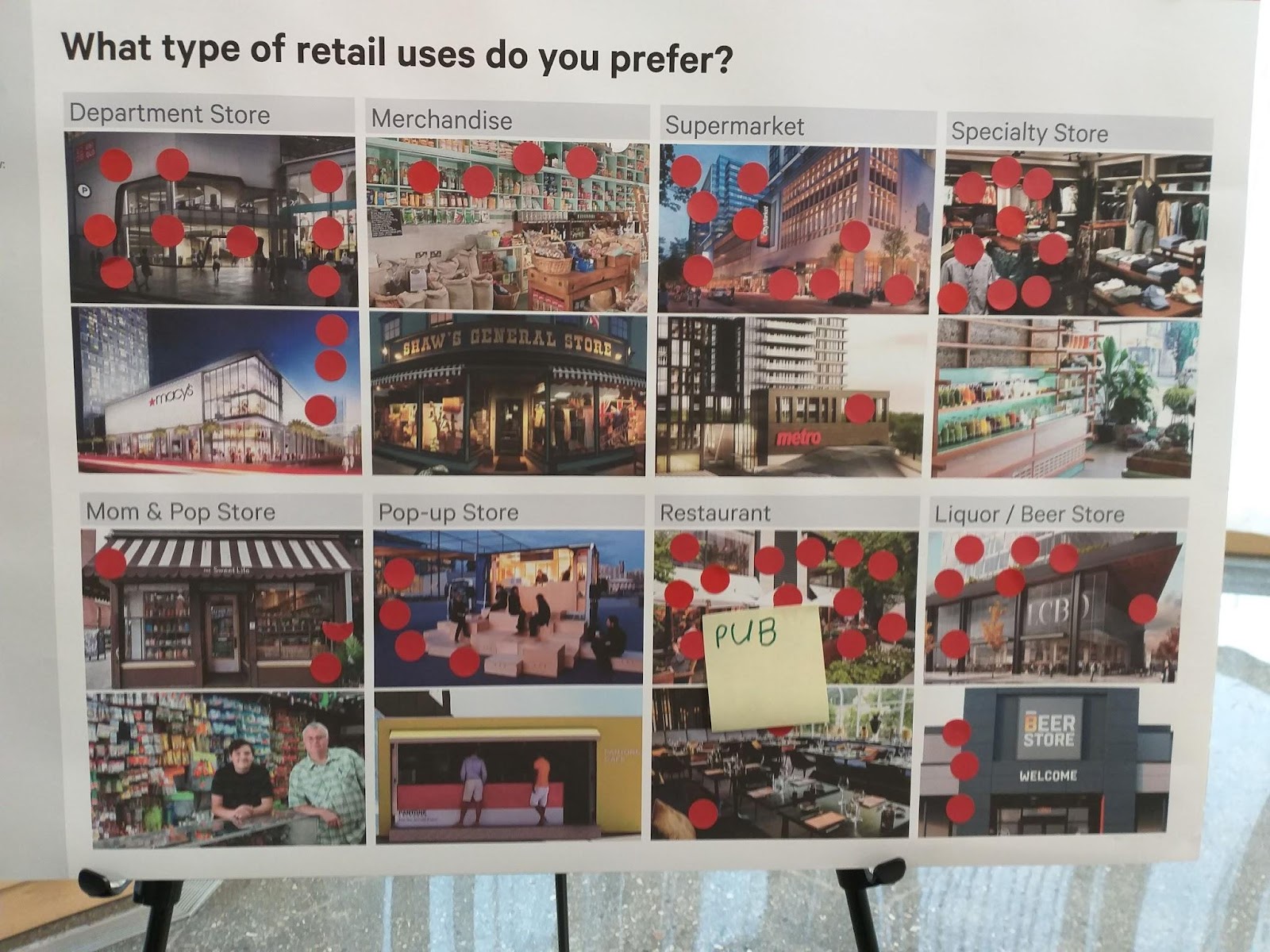 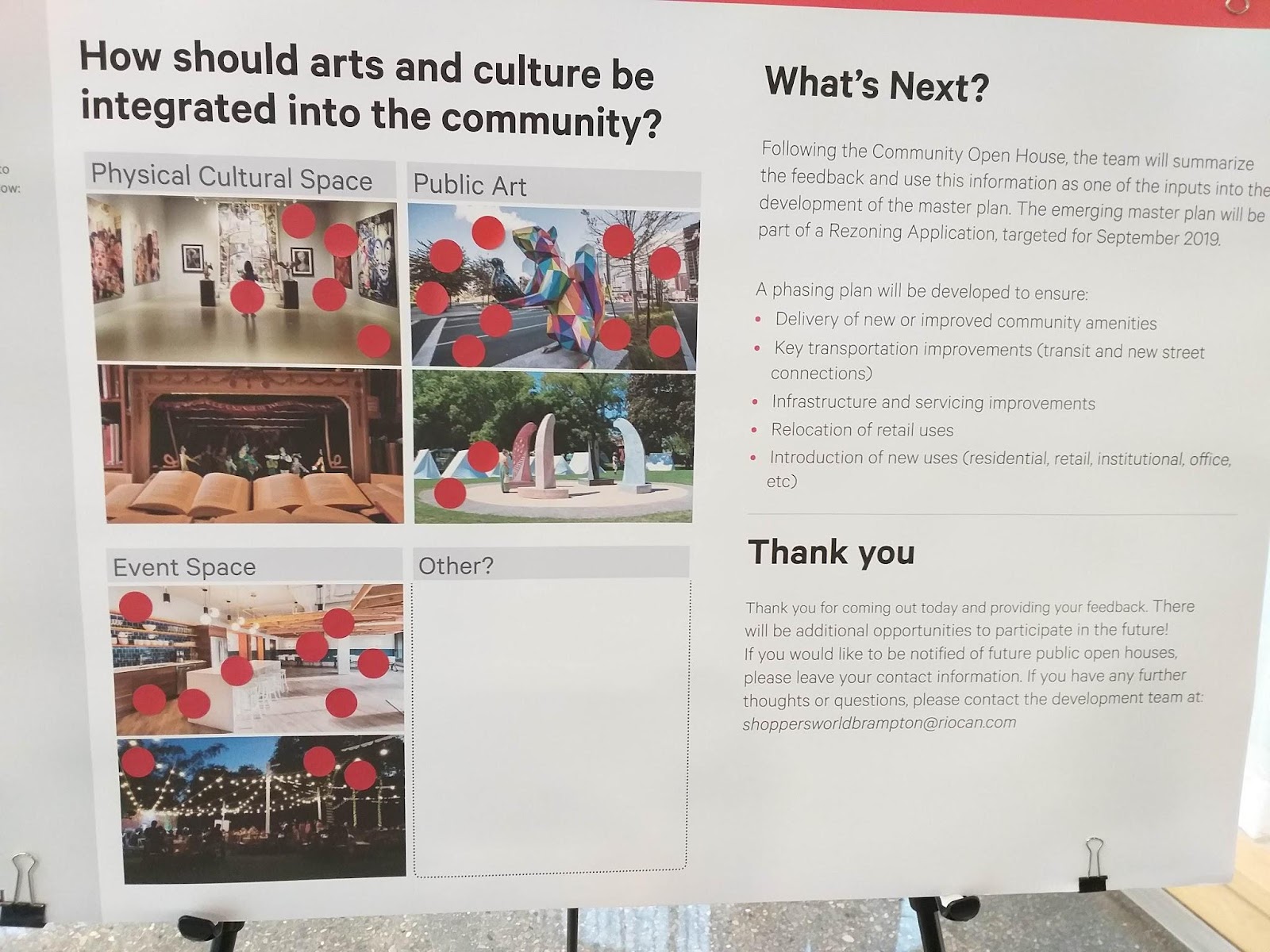 But by far the most interesting proposal from RioCan was to divide up the Shoppers World land into five named 'districts' which were named, with only working titles that could later be changed based on public feedback.

Here's the Shoppers World land (at Main and Steeles) divided into the five areas. 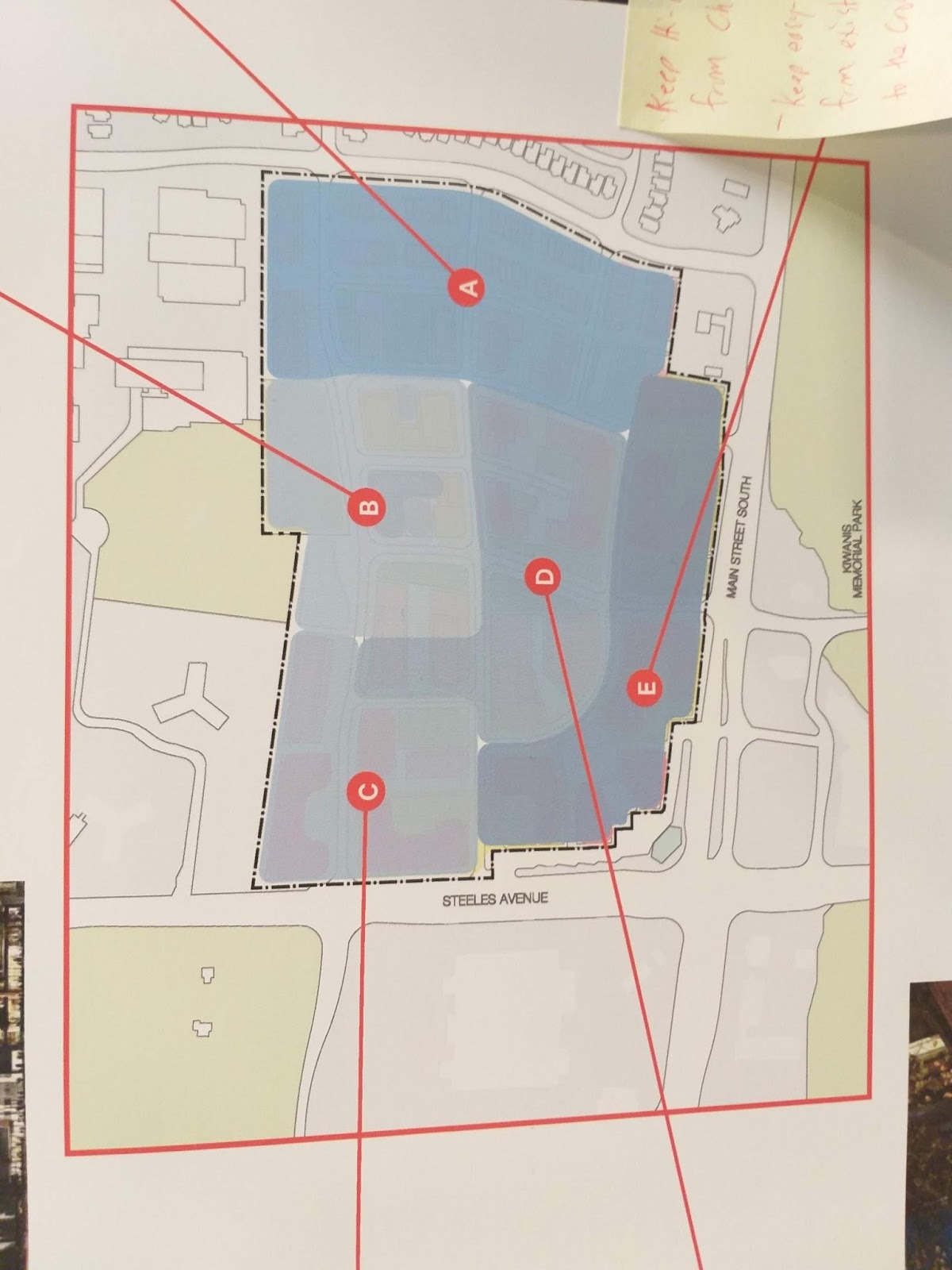 The proposed five districts were named as follows: 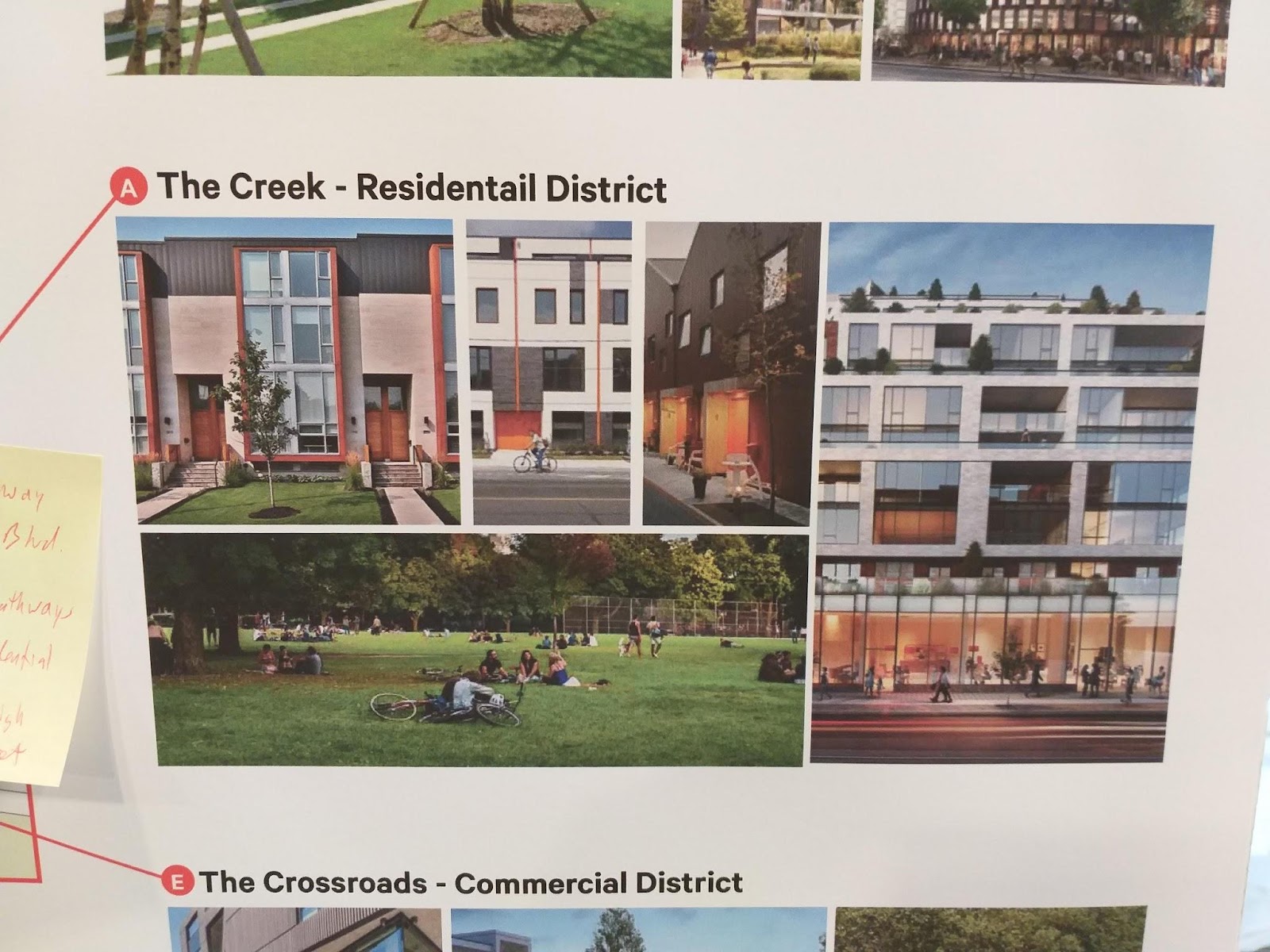 Park at the Heart 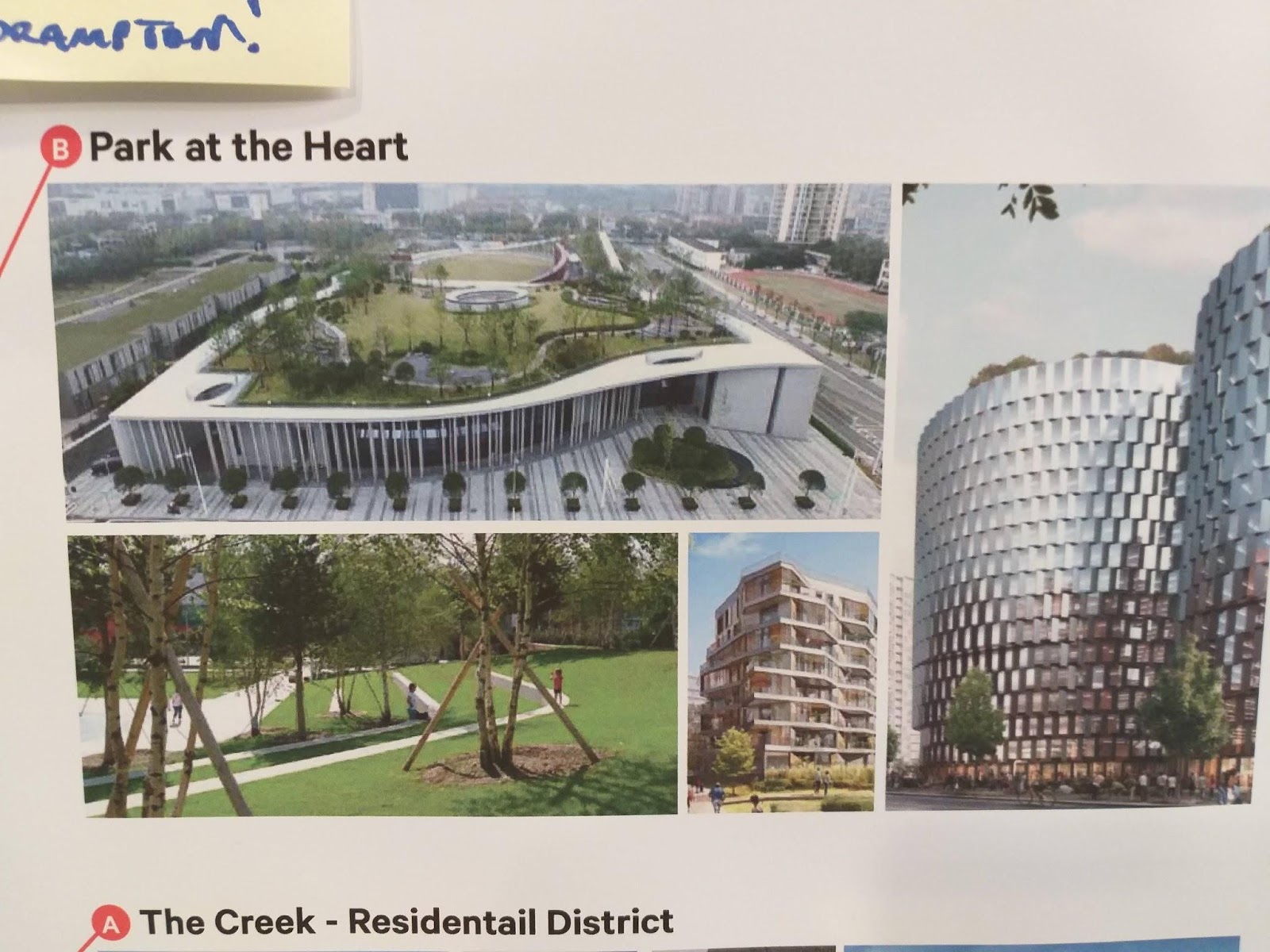 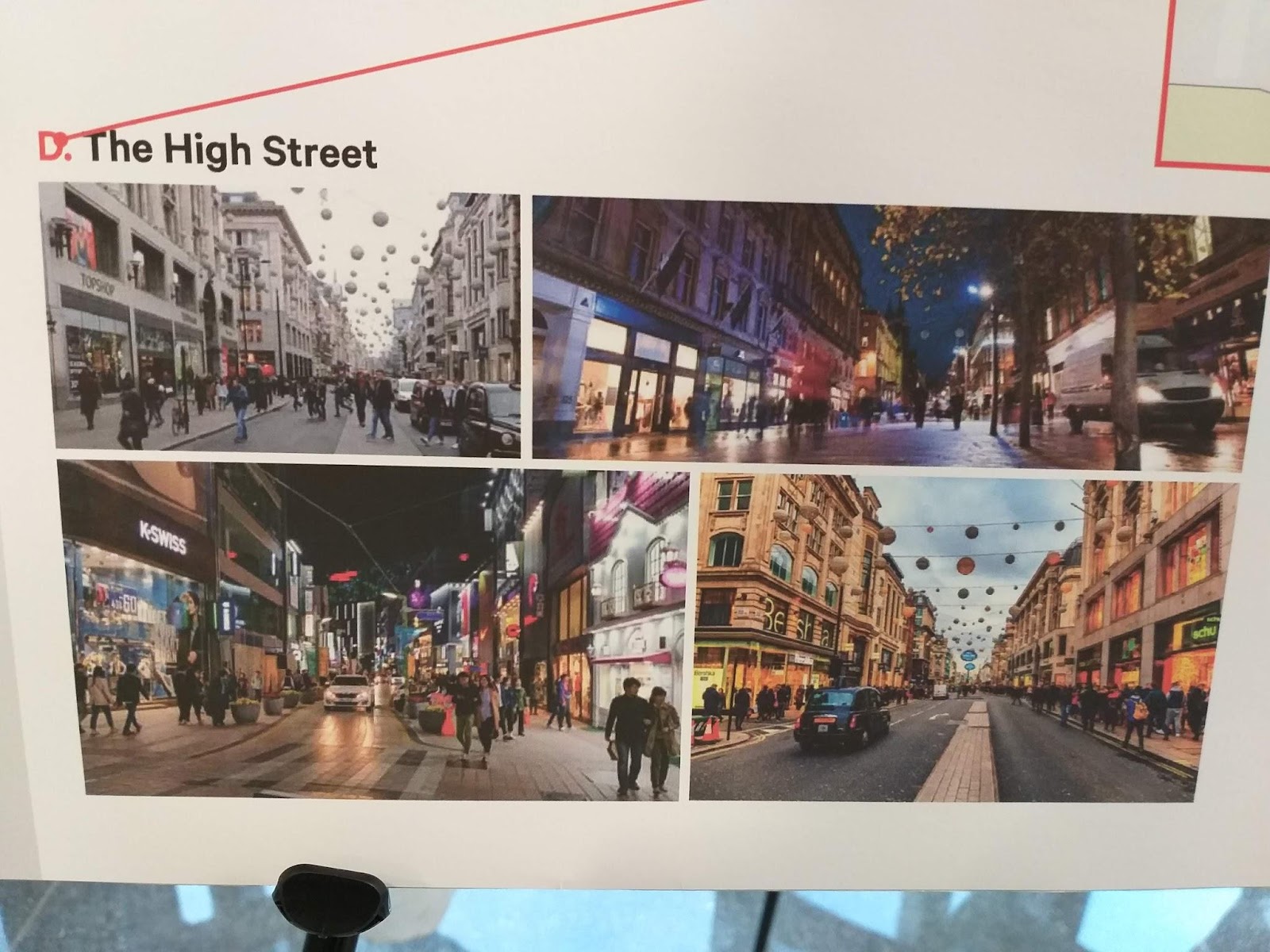 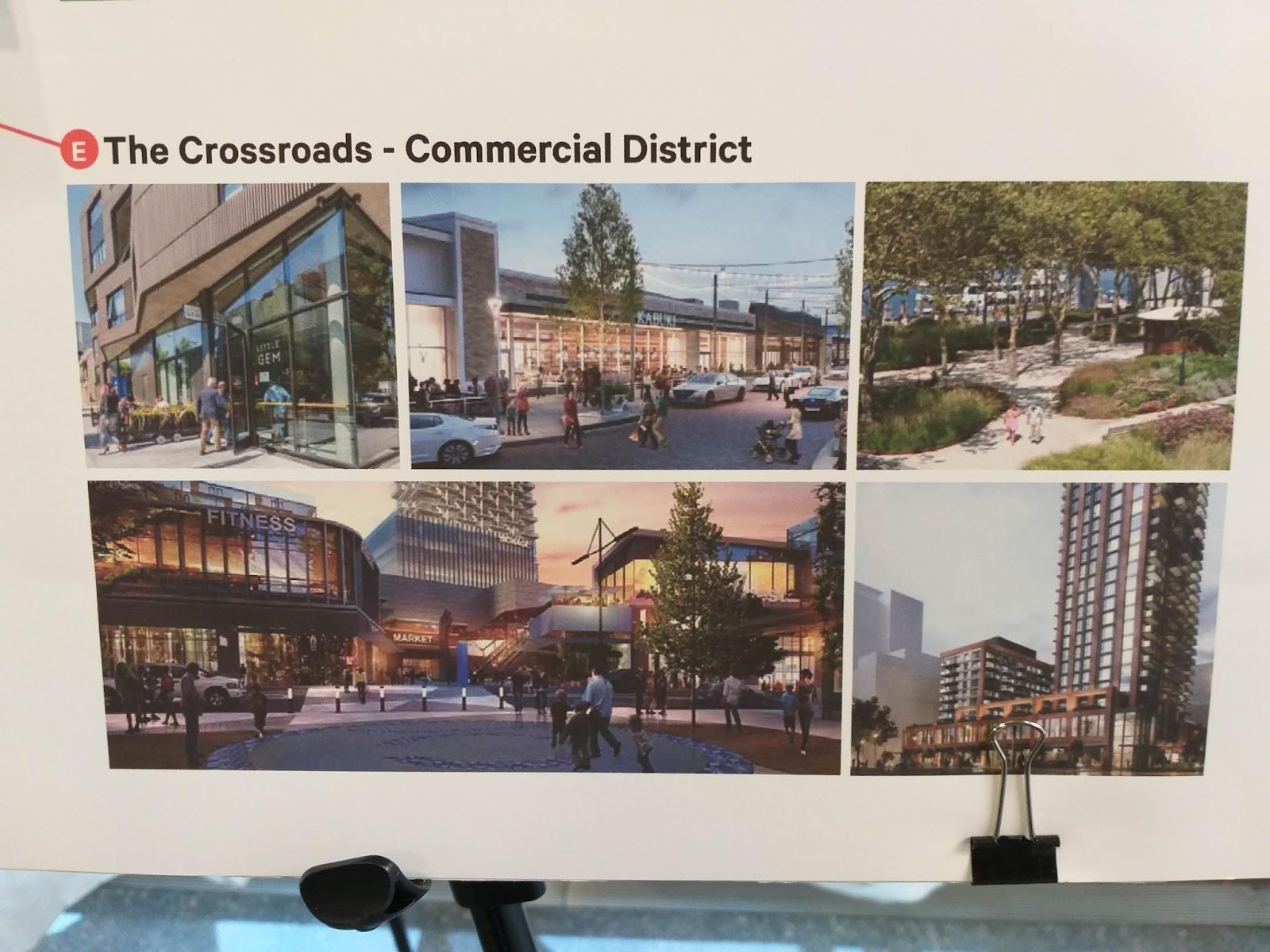 During the sharing from the roundtable discussions, the people that stayed said they wanted something 'aesthetically pleasing', to keep the existing Canadian Tire and Fabricland, more retail and patio spaces to make Shoppers more of a 'destination' spot and more health and wellness establishments for seniors.

One woman suggested copying the library in Vancouver (which resembles the Rome Coliseum) as it could become a community and cultural hub for Brampton.

It’s no surprise of the amenities that were mentioned catered more towards an older generation. When most of the crowd is of that demographic, there’s not much insight from a more younger crowd.

The Brampton 2040 vision opened the possibility of several urban mobility nodes around Brampton that’s not strictly within the historic downtown location at Main and Queen. As it stands, Downtown Brampton is severely limited in its capacity to grow, even with increased investment.

Can you seriously see high rises in Brampton’s downtown core…how many people in Brampton’s other areas actively go to the downtown of their own city for any reason…other than the current craze over the Raptors in the NBA Finals?

By 2040, with a revamped Shoppers World providing more amenities and increased transit connections, could it possibly become Brampton’s new, if not one of, downtowns?

Residents with feedback are encouraged to contact RioCan at shoppersworldbrampton [at] riocan [dot] com and to sign up for updates on the project.

What would you like to see at Shoppers World?

Top 5 Butter Chicken in Brampton
5 Hotspots outside of Brampton for a Family...
Top 5 Buffets in Brampton
Top 5 Places to Get a Snack in Brampton
5 Things to Do on Family Day in Brampton
END_OF_DOCUMENT_TOKEN_TO_BE_REPLACED

Here's Everything You Need to Know About Parking this Family Day at Square One
February isn't everyone's favourite month because of the cold and snow that often accompanies it, but the shortest month of the year has a few things going for—namely Valentine's Day and Family Da
END_OF_DOCUMENT_TOKEN_TO_BE_REPLACED