Facts You Didn't Know About Brampton's Old Courthouse and Jail

The Peel County Historic Courthouse sits on the land of the original Peel Fairgrounds. Designed by Toronto-based architect William Kauffmann, the courthouse served the county for over 100 years. This historic site is a place where people can see the early history of Brampton and explore how the city and Region of Peel (including Mississauga, Brampton and Caledon) has developed over the years. The historical significance of the courthouse and Peel County Jail are protected under the Heritage Conservation Easement, which demonstrates provincial heritage significance. The courthouse and jail will be celebrating their 150th birthday this year, alongside Canada.

Fun facts: The first "official" meeting of the County of Peel Council was held in Peel County Courthouse on January 22, 1867, the same month the jail opened for the very first time. There are guided courthouse and jail tours every Thursday in January at 7:30 p.m.

Placed behind and above the Judge's Bench in the courtroom was a large multi-panel window called an oculus. The window had both practical and symbolic use, while lighting the courtroom it was also a symbol for the eye of god. Though the oculus window was removed from the courtroom many years ago, the original window opening can still be found in the courthouse attic. Unfortunately there are no known photos that document the original appearance of the Judge's bench; it has been changed in the many years the courtroom was used, having once had an emblem above it, to the installation of the coat of arms.  The oculus window was one feature of the courtroom where it was unknown when it was present, though find the masonry window opening strongly suggest that the oculus was an original feature (of the courtroom. There aren't many documents which discuss the oculus, so details such as when and why it was removed are still a mystery).

Concerts, plays, film and more! For years the courthouse has been used to host various events other than court proceedings, some of the earliest records mention a fundraising concert. In addition to music, the courthouse has been a set for dramatic stories to come to life through plays and film. In A Map of the World (1999) a mob waits on the courthouse steps for the verdict of Sigourney Weaver's character Alice Goodwin, whose trial is underway in the courtroom.  The courthouse was also used in To Die For (1995) starring Nicole Kidman. During the filming of both movies alterations were made around the courthouse to give it an American style and appearance.

Many of the offices on the main level of the courthouse featured vaults or safes. The secure storage was often used to keep important records and documents. However, the vault in the Sheriff's office was likely to also contain items that had been seized, including sums of money and weapons.

Top 5 Facts About the Peel Jail

While the jail was designed to accommodate people, it did see a couple animal visitors. During May of 1928 the jail only had one occupant, a silver fox that had been found not far from where fox thieves had been arrested in Norval.  As no one stepped forward to claim the fox, it was agreed that it be given to the man who initially found it. Not all the animals were kept in the jail though, as was the case with a Boston bull terrier that made regular trips to the jail to visit staff and the jail yard. We have also see many animal visitors over the years who make homes on the exterior of the buildings. This is where our characters Coco and Wellington originate from.

THE DESIGN OF THE CELLS

The intact cells have an arched ceiling which cause sounds within the cells to echo. This architectural feature allowed guards to hear what prisoners were saying and doing from the hallway. The echo allowed jail staff to monitor prisoners without having to be in direct eyesight. Even for a single occupant, the jail cells were considered small.

The jail is considered small when compared to today's standards, but originally it was intended to be even smaller, only meant to hold 16 prisoners (one for each cell).  Capacity was later adjusted, resulting in two people sharing a cell, increasing the capacity to 32. Throughout the years the jail was active, the number of people staying greatly fluctuated. At times the jail was near empty, while at other times it was over capacity. Some of the overcapacity issues regarding the jail stem from how rapidly the municipality was growing, but the reasons why people ended up in the jail were also a factor.  For years, many law abiding people who were dealing with illness, homelessness, or poverty were sent to the jail; something which one of the jail's physicians, Dr. Heggie, criticized.  People who had not committed a crime would continue to be sent to the jail until the House of Refuge was built in 1899.

Solitary confinement cells were located in the basement; its primary purpose was to deliver a harsher punishment to inmates who had disobeyed the rules.

There were three executions carried out at the Peel County Jail, in the form of hangings. The first claimed the life of Stefan Swyryda in 1909, the last two occurred much later in the 1940s. All three men were convicted of murder; two of these men are also documented having protested their innocence throughout the proceeding/events, from arrest to punishment. 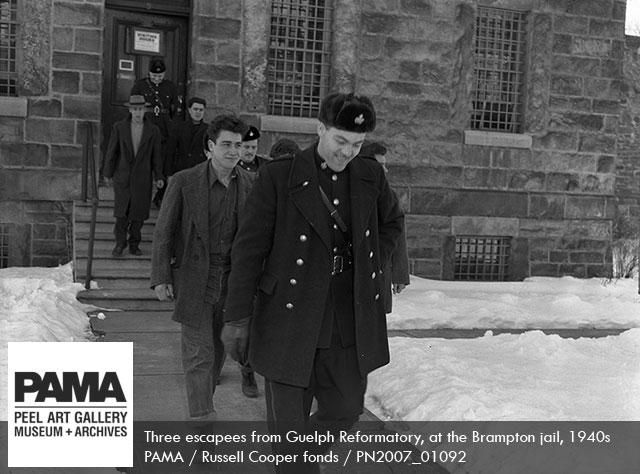 In the 110 years the jail operated, there were many escape attempts, some of which were successful, though many of these escapes ended in recapture. Escaping from the jail was no easy task; inmates would have to a face many obstacles from the jail's design to the jail staff. Even after escaping, prisoners would always face the threat of recapture. Some inmates used the jail equipment to scale the 20ft yard wall, timing their escape for when jail staff was away or distracted. Jail staff would alter their routines to make escape more difficult, adding guards where they could and nightly visits to the jail from the police.

Visit www.pama.peelregion.ca to learn more about exhibitions, programs and events.

5 Strange Landmarks You Can See Outside of...
5 Oldest Neighbourhoods in Brampton
5 Best deals being offered by local wineries
Top 5 Pho in Brampton
Top 5 empanadas in Brampton
END_OF_DOCUMENT_TOKEN_TO_BE_REPLACED