For so many people, suburban living is ideal—but not without its challenges. While some residents enjoy being further away from the hustle and bustle of the city, those same people might sometimes long for better and more efficient public transportation that ensures they're less dependent on cars.

Fortunately for those who live both in and outside of the Toronto downtown core, GO Transit is there to transport people from all over the GTHA to work and play.

But is it affordable to live right near a GO Transit stop?

If you live in Brampton—you are in luck!

"Home buyers in pricey markets are all too familiar with the term 'drive until you qualify' - trading close proximity to employment in the city core for more affordable housing options in further-flung communities," says Penelope Graham, managing editor at the Toronto-based real estate brokerage Zoocasa, in a recent report.

"It's a common strategy for those who work in the City of Toronto, as real estate prices remain stubbornly high; the average house within city limits fetched an average of $1,320,333 in 2018, with condos - one of the last remaining bastions of affordable housing - still over half a million, at $593,366."

Graham says that high prices in the 416 and some 905 areas have prompted residents to avoid living in the GTA (Brampton, Mississauga, Oakville, Burlington, Milton, etc) altogether and resign themselves to longer commutes.

In a recent report, Zoocasa says that while thousands of residents from across the GTA who work in the city have long made the daily trek to downtown Toronto, recent numbers from Metrolinx—which runs the provincially-run transit agency GO Transit—show the commuter load is growing.

According to the report, GO Transit moved 56.5 million customers in 2018, increasing the number of weekly trips by 13 per cent to 217.

The report also says that growing commuter demand has led to plans to increase its services by 55 per cent over the next two years, with two lines in particular - Barrie and Stouffville - experiencing between 95 - 100 per cent growth in usage last year.

The Most Affordable Homes Along the GO Transit Line

But where along the GO Transit system will home buyers find their money goes furthest? To find out, Zoocasa says it collected home prices based on sold listings within a two-kilometre radius from each of the 66 GO Train stations from local real estate boards, as well as commute times based on a weekday arrival at Union Station around 8:30 a.m.

The study found that, to score the greatest value, home buyers had better be prepared for a long ride.

Two of the least expensive options include homes for sale in Hamilton; West Harbour station, located on the Lakeshore West line, tops the list as most affordable, with an average home price of $365,927 and a 71-minute commute, along with Hamilton station, which comes in third at $414,372, and a 72-minute commute.

Those looking for Kitchener real estate are in luck, as the stop ranked second for its average home price of $403,907, and commute time of 111 minutes.

The top five are rounded out by Allandale Waterfront - an option for those interested in Barrie real estate, where homes cost an average of $467,152, and the commute time is 105 minutes, as well as Cooksville station, where one can pay an average of $473,874 and still enjoy a relatively short 33-minute commute.

The Most Expensive Homes Along the GO Transit Line

Check out the infographic below to see how home affordability differs near each GO Train station: 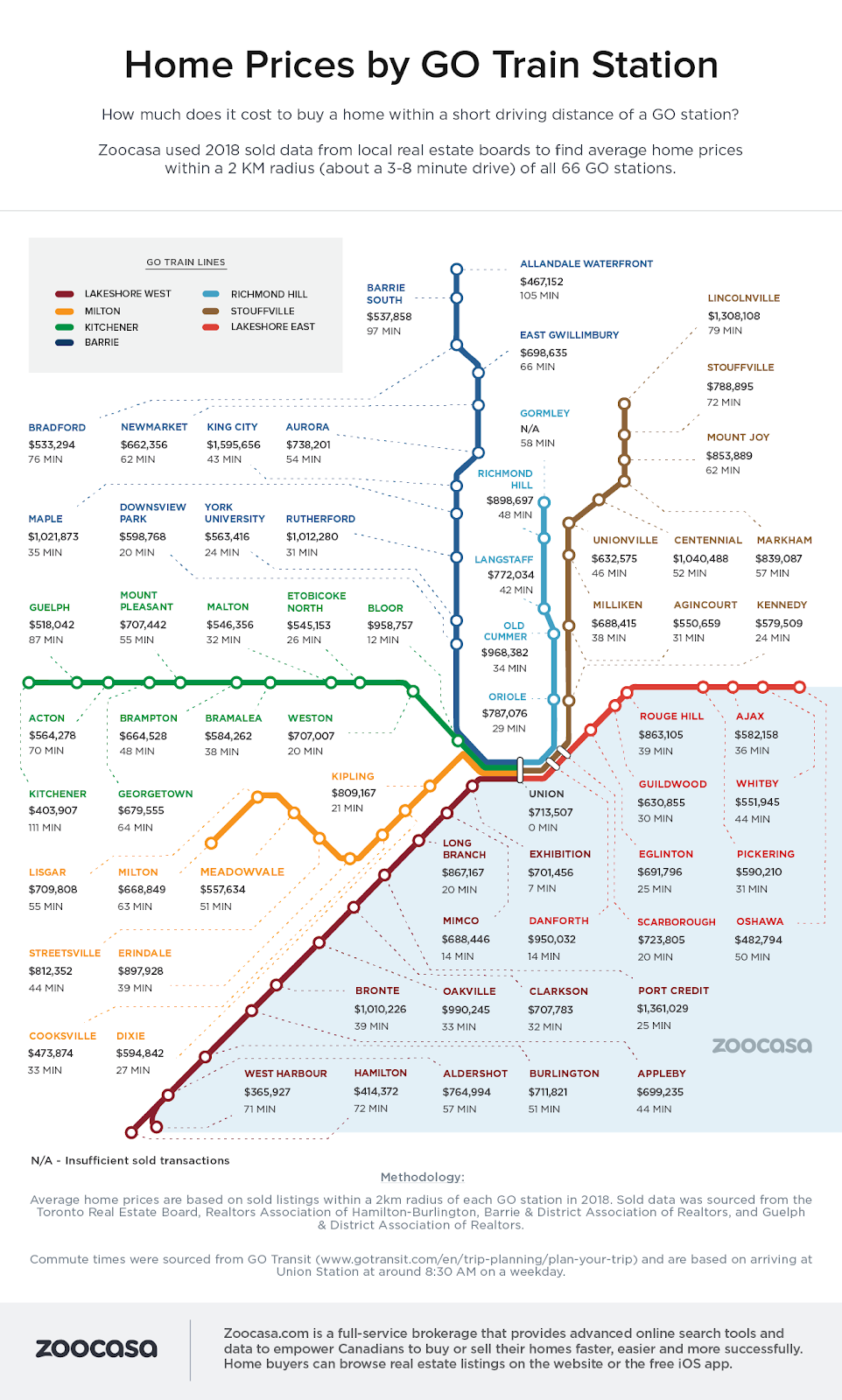