Here's How Brampton Councillors Voted These Past Four Years

As this municipal election winds down on Oct. 22, it's important to take a look at the decisions Brampton city council made during these past four years on various issues surrounding the city.

Inbrampton.com previously profiled key decisions that Brampton councillors made, such as:

Council made the decision to purchase the ailing Riverstone Golf Club and convert it into a new east-end seniors' facility and recreation centre. The vote was 6-4 to purchase the Castlemore club for a whopping $11.6 million, and Mayor Linda Jeffrey herself was one of the parties who disagreed with the purchase.

Jeffrey actually posted on Facebook that the purchase came at the wrong time, bared unknown long-term costs, and was not in the right location for a new recreation centre.

This was a vote whereby the city agreed to provide $1.5 million over three years to the Brampton Beast. Minus one councillor being absent from the vote, all but Jeffrey and Councillor Gurpreet Dhillon voted in favour of what was essentially seen as a bailout by some to an ailing hockey franchise.

This was the meeting at the Rose Theatre where Council decided to effectively cancel the portion of the LRT that would go into the downtown core of city. You can watch the entire six hour meeting here, complete with all the deputations from residents and comments from the councillors and mayor.

Councillors Jeff Bowman, Michael Palleschi, Grant Gibson, Elaine Moore, John Sprovieri and Doug Whillans voted to end the LRT at Steeles. While the councillors are entitled to their opinions and concerns, many others believed that decision was short-sighted.

With all these decisions on the record books, a Brampton Reddit user put up this post providing a simple breakdown of these key votes from the past four years. The votes in bold indicate the majority that passed the decision. 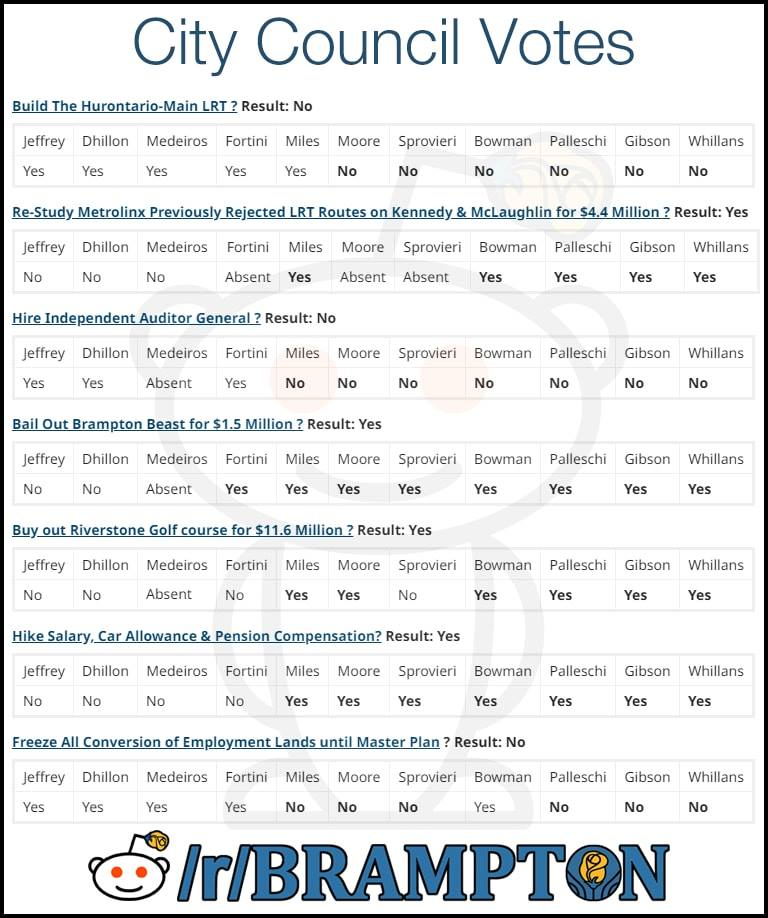 Jeffrey's former chief of staff, Jaskaran Singh, tweeted out the same graphic, commenting that "There’s a clear pattern here, namely six councillors that have undermined the city. It’s like a really lame version of “the 6ix”."

However, a closer look at the votes shows that it's not as black and white, with Jeffrey's "allies" on the side of right and the remaining six councillors on the "side of wrong".

For instance Coun. Martin Medeiros, a key Jeffrey ally, was absent of three of those decisions, including the hiring of an independent auditor general for Brampton.

Coun. Pat Fortini, another councillor mostly aligned with Jeffrey, voted in favour of bailing out the Brampton Beast.

Coun. Jeff Bowman, who as you can see voted against the LRT, in the last decision voted to stop converting employment lands until the city developed a new master plan, which was a position the mayor also took.

And Coun. John Sprovieri, who is now running against Jeffrey for her job, voted against buying the golf course.

The point is when you take a closer look, members of the so-called "lame version of the 6ix" have not always been rockstep aligned against Jeffrey 100 per cent of the time.

With three councillors, Elaine Moore, Grant Gibson and Gael Miles, retiring and Sprovieri running for mayor and not likely winning, there is ample opportunity for Jeffrey or her main competitor, Patrick Brown, to help candidates that are backing them elected to council.

A more interesting dichotomy would be if either mayoral contender gets elected with their opponents' preferred choices for council taking up the bulk of the seats around that council chamber.

That would certainly make for fascinating dynamics and votes in the next term.