Here's What Brampton is Doing With This Extra Money

There may be some good news for bike lovers in Brampton, as city councillors last week decided to put 20 per cent of the city's 2018 budget surplus towards a number of projects.

According to an email from Councillor Gurpreet Dhillon, approximately $5 million will be allocated towards three key initiatives:

The remaining 80 per cent, or $20 million, will be allocated back into reserve accounts and to pay off city debt.

City staff will be reporting back to council with plans for all three initiatives by April 1.

During the January 30 council meeting, Mayor Patrick Brown said he spoke with a number of residents in Brampton whether they cycled in the city. Some told him that they cycled in other places because they were concerned about the safety of the roads in Brampton.

While other councillors such as Michael Palleschi said he was willing to put up more than just $1.8 million, others like Doug Whillans made a quip about people who cycle complaining about snow clearing. "This is Canada, not the Netherlands," which just sounds disingenuous; Whillans sounds like he believes that only in the Netherlands does the idea of using your bike to go to work and back home again have merit.

As for the money allocated to parks, Brown suggested adding a 'green strategy' to the park enhancement fund, but Dhillon was concerned additional language would broaden the scope too much, making the motion stray away from its original intent. A compromise was reached when Councillor Jeff Bowman suggested adding the line “consistent with the Environmental Master Plan", which sounds a bit like stating the obvious.

Overall, it's good that council wants to put down actual dollars to figure out how to do an active transportation plan with diverse options for residents to get around other than by car. However, there is some evidence that current transit plans have even less routes planned than plans from over a decade ago.

Here's Brampton's Transportation Master Plan from circa 2004 with the vision of what transit in the city will be by 2021. 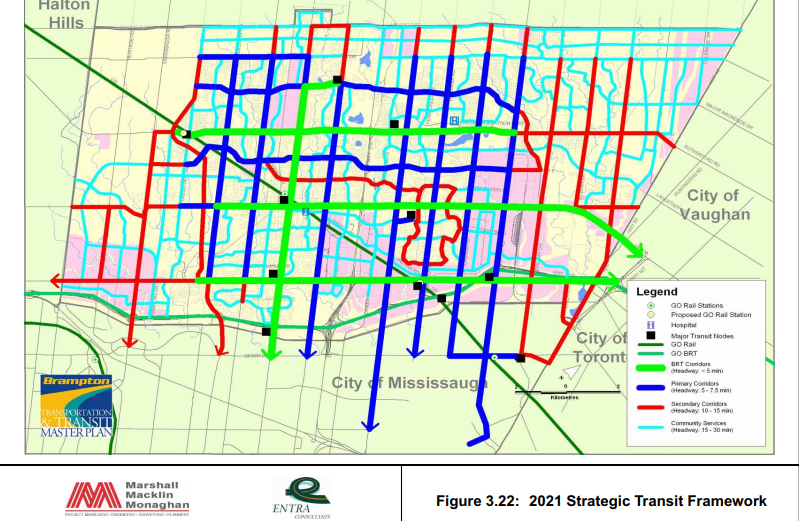 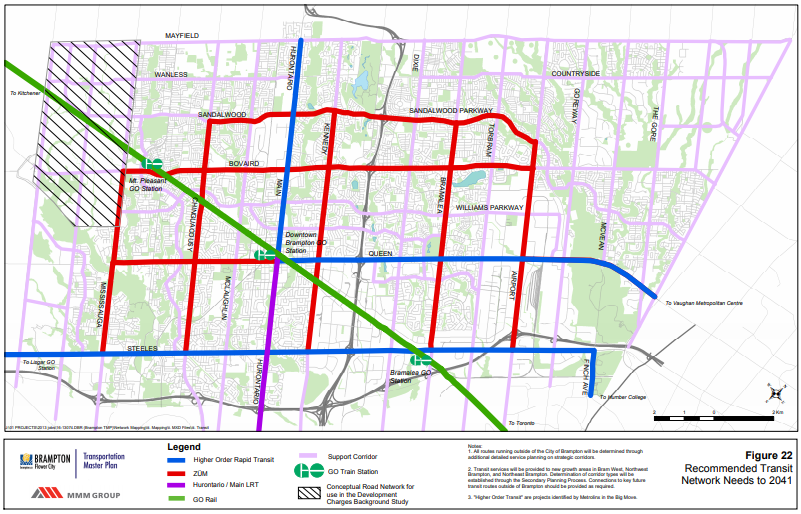 It does seem like the previous plans from a decade or so ago had more transit planned out by this time in a few years, than the more recent one looking ahead into 20 years from now.

Still, there's a framework there for the city to work with and no doubt future routes would be proposed to add to the existing plan.

What do you think of the money being spent for these additional projects in Brampton?