“Open for Business” is a tagline that has been frequently bandied about by the Ford government, as it reflects their goal of “bringing jobs back to Ontario,” or something to that effect.

Last fall, signs were unveiled with that slogan plastered for all to see when they drive into Canada’s biggest province. But Doug Ford is not content to have those words remain stationary in only certain locations.

It seems the premier wants them all over roads across Ontario.

A recent story from Global News showed that government documents have plans to change the iconic ‘Yours to Discover’ license plates that Ontarians have seen for decades. This change would apply to commercial vehicles only.

“This initiative will see us refresh a license plate design that’s been relatively unchanged since the 1960s and — depending on the slogan chosen — help to rebrand Ontario as a business-friendly province,” the documents say, with a government source adding that the replacement slogan is likely going to be the aforementioned “Open for Business”.

Naturally, this brought almost immediate derision, especially from the Ontario NDP who issued this statement, stating it was nothing but a political stunt on Ford’s part.

“Doug Ford’s ridiculous scheme to turn vehicles into political billboards is a new low in self-serving electioneering. Redesigning our licence plates to be Ford ads is a colossal waste of money. This is a bizarre ego-driven attempt to turn every licence plate into a Ford vanity plate,” said NDP MPP Catherine Fife.

“Our licence plates should be a symbol of what Ontario has to offer — including our stunning natural environment — not a billboard for a petty premier that puts partisan interests above people.”

Some may argue that putting ‘Open for Business’ on commercial vehicles has some merit as vehicles used primarily for the conduct of business would be the most ideal to spread such a message about enhancing business opportunities in the province.

However, this slogan was used as part of the PC party campaign, and this sounds more like the PCs using taxpayer dollars to spread a partisan, political message.

Another consideration is that the phrase ‘Open for Business’ is not that particularly imaginative. As one Twitter user pointed out, Ontario is not the first place to use that slogan to attract investment, showing signs from Virginia, Wisconsin, Maine and Texas.

It's banal, and such a worn out phrase. pic.twitter.com/VbJPkeFQ1C

Of course, an announcement of such a change is open to various sarcastic responses on alternative slogans, such as this one poking fun at the Ford government’s recent edict that Tory MPPs stand up and clap every time Ford or one of his ministers says something in the Legislature.

When it comes right down to it, there’s really only one slogan that is befitting of every aspect of this government that is less bland and more exciting than just an opaque line like ‘open for business’, and that’s… 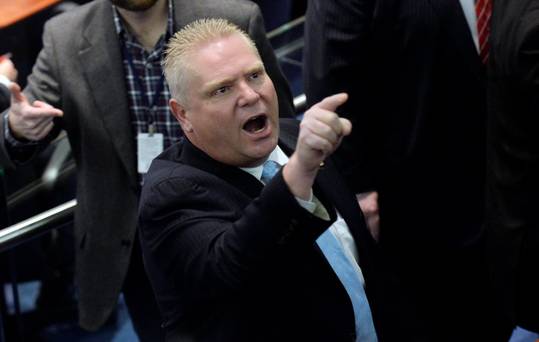 Photo courtesy of We Are Oshawa

What do you think of Doug Ford’s idea for brand new license plates in Ontario?

Top 5 Butter Chicken in Brampton
5 Hotspots outside of Brampton for a Family...
Top 5 Buffets in Brampton
Top 5 Places to Get a Snack in Brampton
5 Things to Do on Family Day in Brampton
END_OF_DOCUMENT_TOKEN_TO_BE_REPLACED