Here's What Patrick Brown Will Do For Brampton

It's official: he's now in charge.

Patrick Brown was sworn in as Brampton's new mayor for the 2018 to 2022 term, alongside four new councillors and six returning incumbents.

Technically, Brown officially assumed his duties over the weekend, in order that there would be no vacancy of the office in the event of an emergency. The new mayor received his chain of office from former PC leader and Ontario premier, Bill Davis. 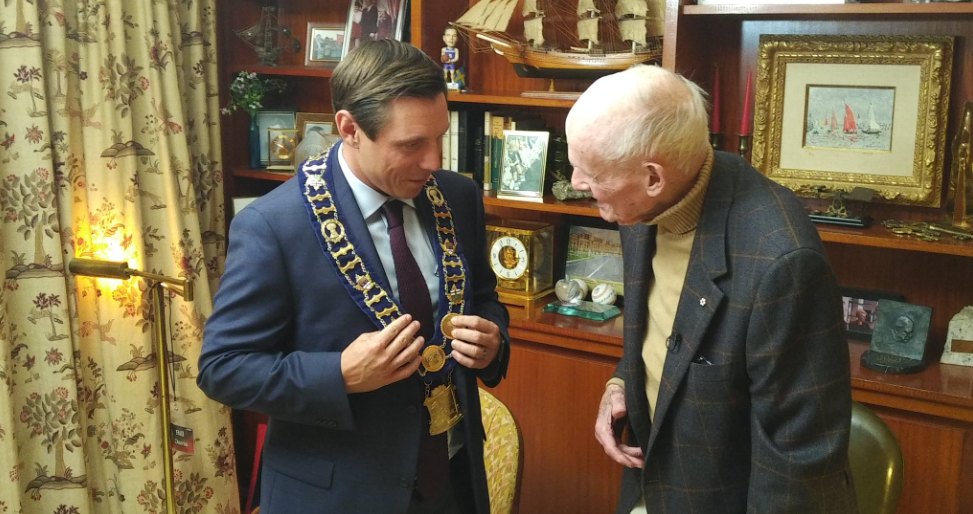 The swearing in of the new council took place on Monday, December 3 at the Rose Theatre. The inauguration began with a ceremonial processing featuring a Lorne Scots Piper, Brampton Fire, Peel Regional Police and Paramedic Services Honour Guards, as well as a Smudging Ceremony by a Anishinaabe Cultural Consultant. 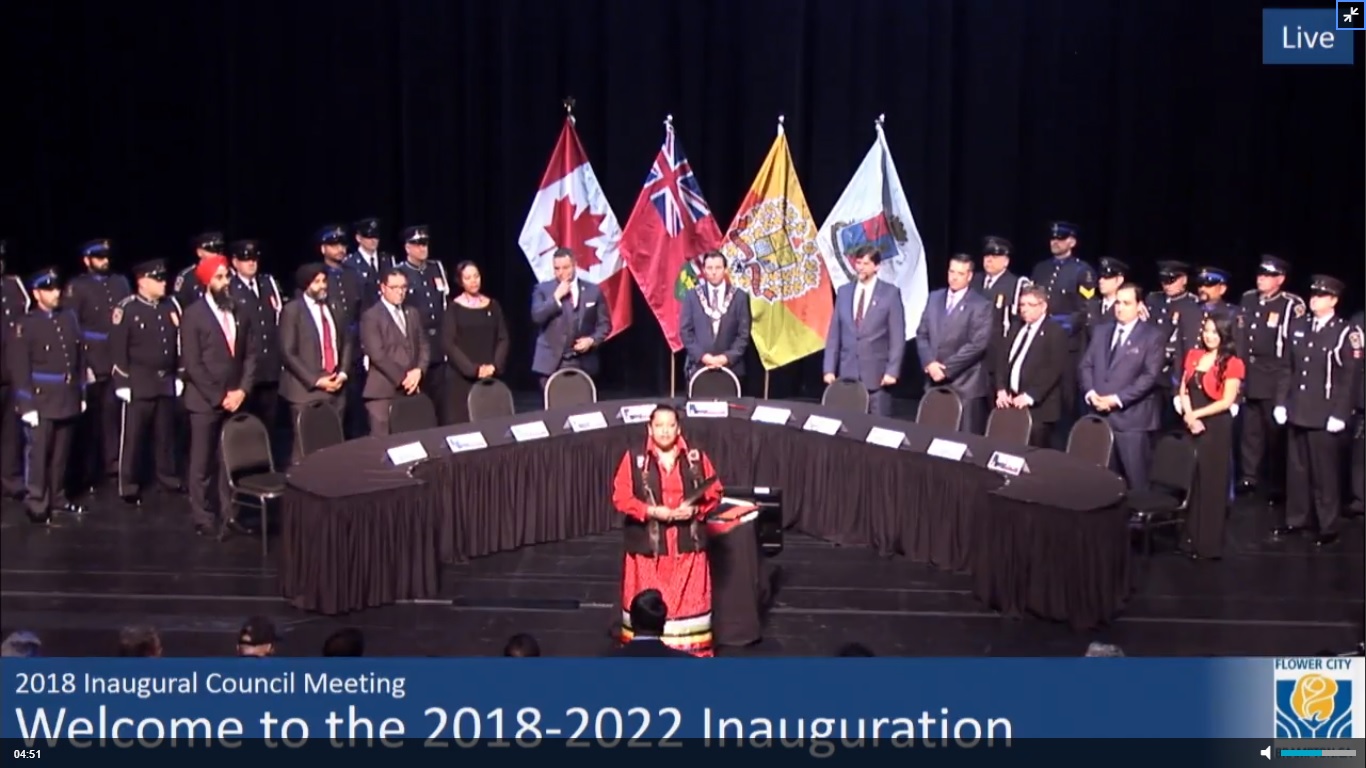 This new Brampton will see a number of firsts: the first Filipino councillor elected (Rowena Santos), the presence of two Sikhs on council, and the first black female elected to council (Charmaine Williams). 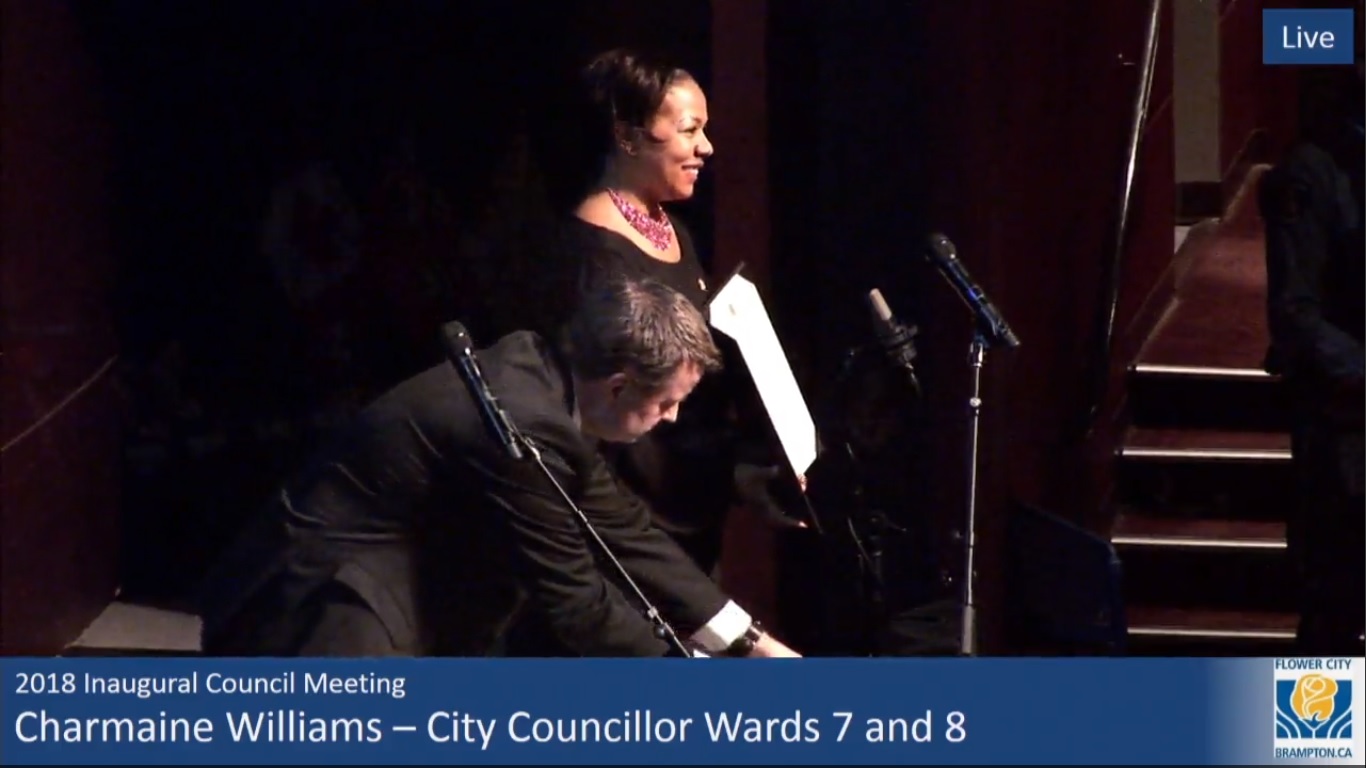 A subsequent special meeting took place one day after on Tuesday December 4 to select the sixth regional councillor to represent Brampton. A city councillor is selected from amongst the rest to sit on regional council. On the first round, Councillor Santos was selected by six councillors (which constitutes a majority) to also sit on Peel Regional Council.

Mayor Brown then outlined after his swearing in his priorities for the next four years.

With economic development, he said every development will be looked at with the economic development lens and businesses. "Brampton has 100 million square feet of industrial/commercial land available. We need to have 'The Brampton Advantage' and leverage the expertise of our ethnic communities to build on the local economy."

But the mayor also said he would keep taxes under control. "We cannot have tax increases that are inconsistent with neighbouring cities; Brampton needs to be competitive," adding that under his term the city will be of making pitches for investment in Brampton while also finding efficiencies. Brown hopes to host the first international investment conference in Brampton.

As for crime, Brown pledged more resources not only to front line police, but crisis support team programs dealing with mental health issues. "We can't criminalize mental health; we need to have the right resources to deal with this problem."

On the transportation file, the mayor said the province and the federal government are not making equal investments in this city as they do in other jurisdictions, such as the Scarborough subway. Brown pledged to continue investments in Brampton Transit, but also to get work done on other needs such as widening Highway 410 and all day two way GO service. He didn't say anything about the LRT, but touted Brampton's available fundamentals for pedestrians and cyclists to build an active transportation network.

On the university, Brown said he wanted better. "Despite the provincial decision, we are committed to this project. We are already engaging in discussions to move forward. We deserve to have post secondary education in Brampton; the previous satellite campus was the bare minimum. Brampton deserves a full university," he said.

"We are the core of the 905 where those swing seats other politicians covet during election time are located, but we have been massively underfunded," the mayor said near the end of his speech. "The days of not accepting our fair share with a smile are over," citing if the funding formula was fixed, there would have been an additional $30 million for Brampton families.

"We should not be treated like second class citizens. Brampton has one bed per 1,000 residents for hospitals, while provincial average is three per 1,000. We need to have the same quality of healthcare in Brampton as they do in rest of Ontario. I don't care if it is Ford or Trudeau, my party is the people of Brampton and I'll work with anyone who delivers for Brampton."

"If we all work hard, we will get Brampton back on track," Brown concluded.