The newly sworn in Brampton City Council hit the ground running on perhaps one of the most contentious issues they have to deal with: whether to allow cannabis stores to operate in Canada's ninth largest city.

Selling of recreational cannabis was legalized back on October 17; in Ontario right now online sales are available, and the new Ontario government said that by April 1 of 2019 brick and mortar stores will be allowed to sell cannabis.

Municipalities can choose to either opt in to this new regime, or opt out, by January 22. Staff made it clear that if Brampton doesn't opt out by then, the city automatically is opted in.

Brampton city staff presented a report at the December 5 Committee of Council that advises councillors that the city should opt in. One of the findings is identifying potential sites for a retail operation in Brampton, as shown in this heat map from the report. 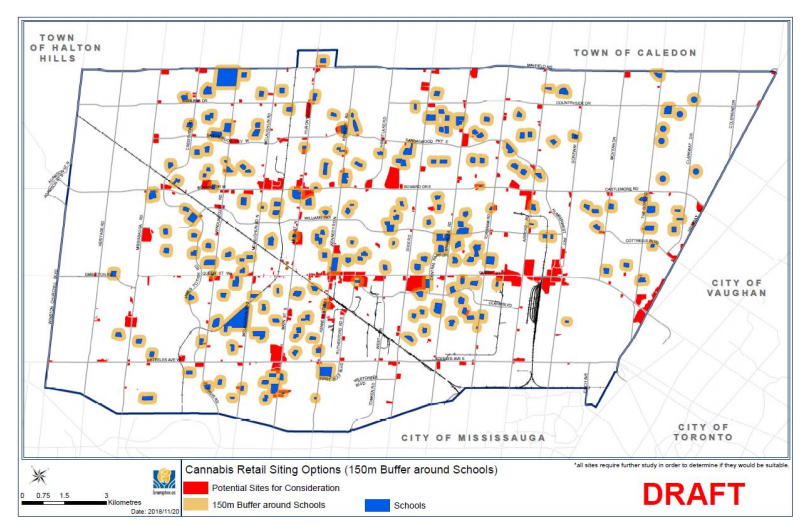 As decreed by the provincial government, any store would have to be a minimum 150 metres away from schools.

There will be a maximum of 75 licenses for each retailer in Ontario and four plants allowed per household. But the licenses are non-transferable between different retailers. 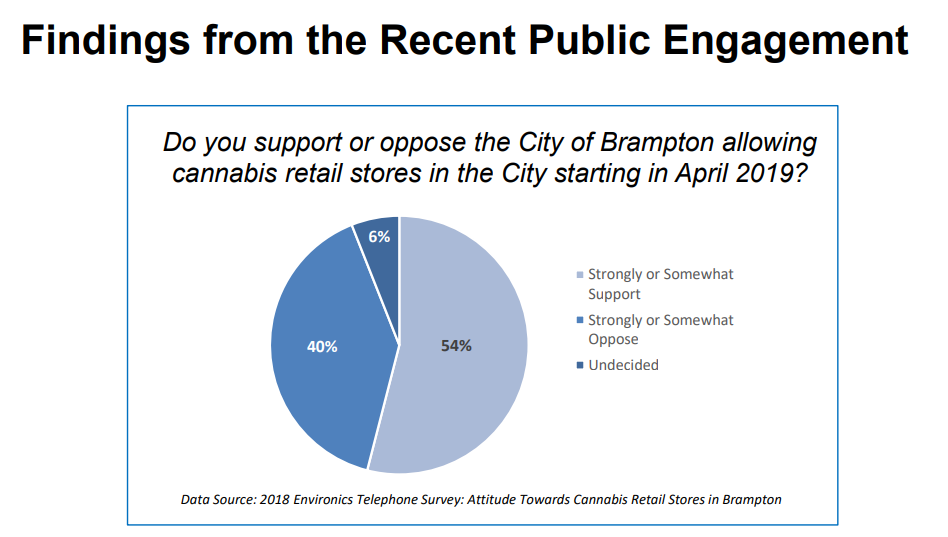 Staff also said in their report that Brampton would be looking at $40 million in funding over a two year period as one time funding for setting up the cannabis regime, but it would be split 50/50 with the Region of Peel.

When asked how much money the city could rake in, staff said the number went from $650,000 to $1.2 million annually in taxing cannabis if all municipalities opt in. If there were, for example, around 20 municipalities only, the highest revenue could go is between $2 to $5 million.

The staff conclusion was to opt in: "Staff recommends Council to "opt in" to allow private cannabis retail stores to operate in Brampton in order to maximize funding allocation to help offset costs and reduce potential tax impacts on Brampton residents," the report concludes.

One city councillor, Wards 7 and 8 Coun. Charmaine Williams, has already indicated her opposition to opting in and plans to move a motion to 'opt out' of the cannabis regime. Previously, Williams said that if Brampton opted in the minimum distance should be at least 500 metres from schools.

"My motion to opt out is not about the dangers of THC, access to marijuana or moral reasons, but about whether we should rush into something we have little information about. I've come to the conclusion that Brampton would be better off without marijuana. If it was to reduce crime, then why is the federal government offering money to city for crime prevention? How would this affect existing businesses and what is the net job gain?" Williams said when she introduced her motion.

However a number of residents also spoke on the subject. A woman named Anna-Maria said that cannabis saved her life by shrinking a malignant tumour that doctors were able to surgically remove. She said she would prefer to obtain her cannabis from private retail stores who could tell you the THC levels, but also said she would prefer them to be 500 metres from schools in the city.

A resident thought Williams' concerns over the 150 metres, drug users flooding in and stores popping up every corner were not valid. He said he was buying pot in high school 47 years ago; that's still happening today, so there is already pot being sold near schools. But another man named Ralph said soft drugs can lead to hard drugs and keeping crime out of Brampton.

Mayor Patrick Brown asked about policing costs, which staff answered that it was based on a complex algorithm from the Region of Peel. It was estimated that additional costs between $6 million to $9 million, but not sure if that includes functions that police will no longer be doing because of legalization.

In the end, Brampton councillors voted for a motion from Coun. Michael Palleschi to defer the decision to no later than the second week of January at a special council meeting to be called by Brown.

Council also passed a motion from Coun. Paul Vicente to 'immediately establish an outreach and communications plan no later than the first week of January.' Vicente's motion would give time to inform Brampton residents of potential cannabis retail locations, giving people time to petition their concerns and feedback.

Since the city has the deadline of January 22 before they can opt out, or get automatically opted in, that doesn't leave much time in the first two weeks of January to make a decision.

Do you think cannabis stores should be allowed to operate in Brampton?