Is All Day Kindergarten Ending After 2019?

There’s been some moves on the provincial education front, as the Ontario government announced they were launching a consultation process, specifically on the teachers’ hiring process and, more importantly, on whether to continue with the cap on class sizes implemented by the previous Liberal government.

Now, another signature Liberal education initiative is in the crosshairs, as the Ford government has raised the possibility of ending all day kindergarten after 2019 during an announcement about proposed changes to the Childcare Act.

"These changes will give parents freedom to choose child care options that work best for them, in locations close to where they live and work," added Thompson. "It will give families more options while keeping their children safe by maintaining the same provincial health and safety provisions and progressive approach to enforcement,” Education Minister Lisa Thompson said during a press conference.

Thompson said all day kindergarten will remain through the next school year starting in September 2019, afterwards they will see if their consultations reveal whether the program is working or not. This was repeated by Ontario Premier Doug Ford during a press conference on Wednesday, January 30 when Ford announced construction of new facilities at the Centre for Addiction and Mental Health in Toronto.

Ford has promised to find $6 billion in savings during last year’s provincial election.

The former McGuinty Liberal government introduced all day kindergarten in 2010. Although it came with a price tag of over a billion dollars, the former government insisted that parents were saving an average of $6,500 a year, as the financial burden of before-and-after school care shifted from families to the government.

Reactions from the Ontario NDP were as predicted. Here is the party’s Education Critic, former Toronto school board trustee Marit Stiles. 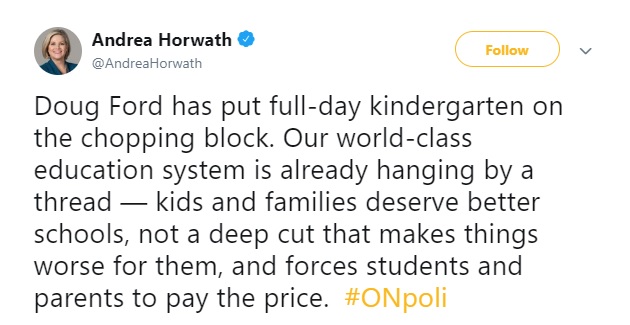 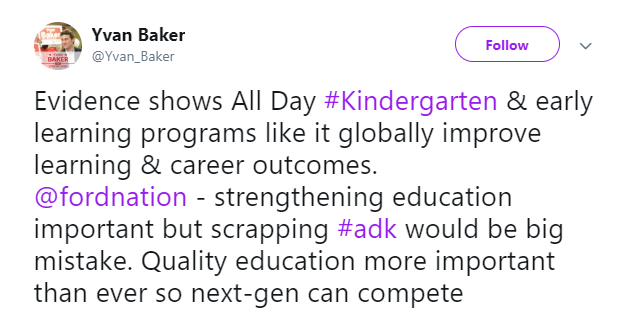 There were also some other viewpoints on the possibility of all day kindergarten being axed, such as this person who pointed out the additional employment generated with the program. 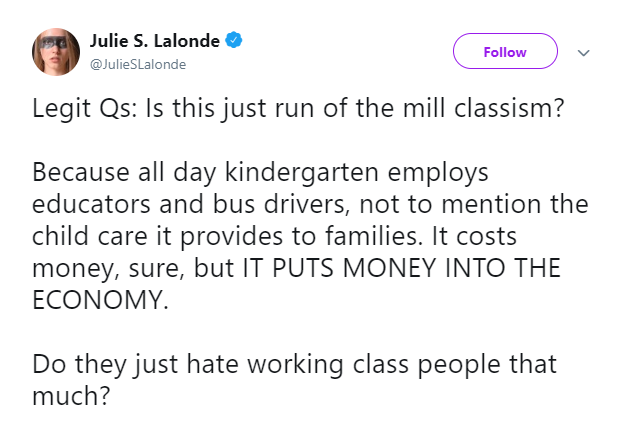 But there are others who offer a differing view about all day kindergarten. 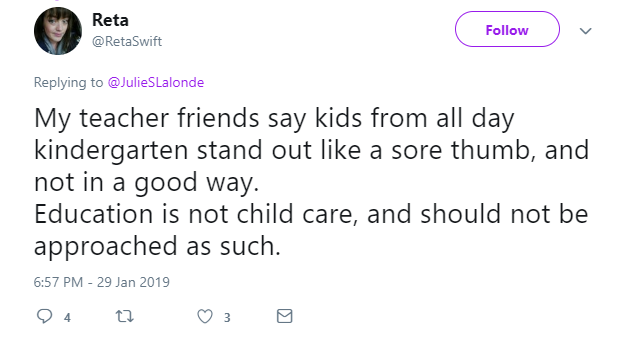 Do you think the possibility of all day kindergarten ending is a good idea, or is it more important to keep it as a vital component of the educational system and long term growth?