If you thought the recent election poll showing Patrick Brown with a slight lead in Brampton's mayoral race tomorrow, you may be really surprised at the latest poll to come out today.

Mainstreet Research, who conducted the survey showing Brown ahead by almost five points, has followed up and has now released new numbers, showing support for the former PC party leader has doubled. 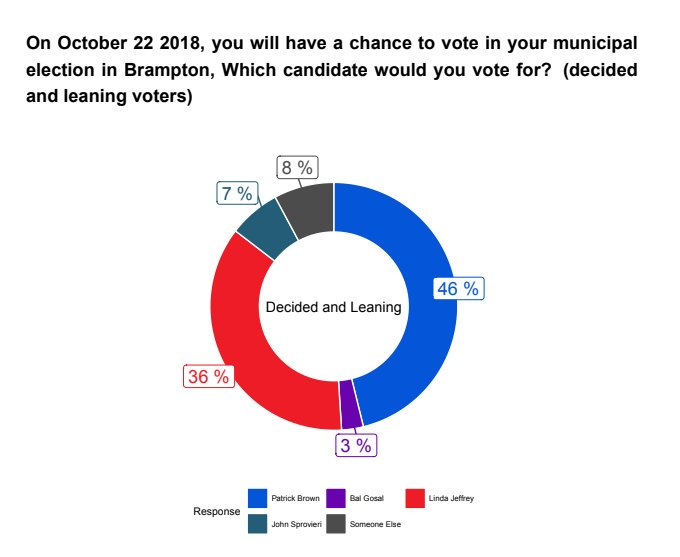 Brown is in the lead with 46 per cent of the votes, 10 points ahead of incumbent Brampton mayor Linda Jeffrey. Eight per cent prefer 'someone else', seven per cent support Regional Coun. John Sprovieri and former MP Bal Gosal gets three per cent of support.

"We’ve remained in the field over the weekend in Brampton and with just 24 hours to go, it looks like Patrick Brown has a significant lead," said Quito Maggi, President and CEO of Mainstreet Research, in his tweet.

But should these two polls be taken with a bit of a grain of salt? While Mainstreet managed to accurate project the 2015 federal election, they were accused of conducting 'push polling' with the intent to obtain a particular result when it came to the last major mayoral election they surveyed.

In 2017, Mainstreet projected Calgary mayor Naheed Nenshi losing by 17 points, but Nenshi ended up winning by seven points on election night in Calgary.

The important thing to do now is to vote, for ultimately it is up to Bramptonians to decide who will be their next mayor.