Ontario Government Votes Against Opening A Third Hospital in Brampton

Well, that was fast.

Following an announcement on the morning of October 16 outside Brampton Civic Hospital by three NDP MPPs from the city, the Conservative government voted against the motion brought forward by NDP leader Andrea Horwath to allocate money in next year’s budget to constuct a third hospital for Brampton.

The motion reads as follows:

Whereas hospital overcrowding in Brampton is critical and in a single year, 4,352 patients were treated in hallways at Brampton Civic hospital.

Whereas hospital overcrowding is a problem across Peel Region.

Therefore the Legislative Assembly calls on the Government to provide the necessary funding in the 2019-2020 Budget for the construction of a new hospital in Brampton.

Horwath’s motion was defeated in a vote of 35 to 65. Green Party leader Mike Schreiner (who represents Guelph) also voted in favour of the NDP motion. 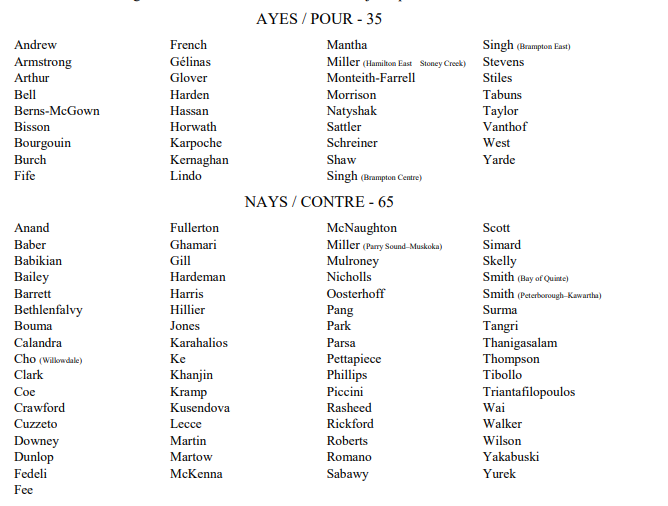 Premier Doug Ford was himself not present for the vote…and neither were the two PC MPPs from Brampton, a fact which did not go unnoticed.

"It's simply wrong that the Ford Conservatives voted to deny Brampton the hospital our community so desperately needs. And we are not only disappointed but, frankly, we’re outraged that the Conservative MPPs — Prabmeet Sarkaria from Brampton South and Amarjot Sandhu from Brampton West — didn't bother to attend the debate or the vote on this issue critical to the people we serve in Brampton,” Sara Singh (Brampton Centre), Kevin Yarde (Brampton North) and Gurratan Singh (Brampton East) said in their joint statement.

Horwath issued the following statement after the vote was taken:

"It’s wrong and shameful that Doug Ford’s Conservatives voted against funding for a new hospital in Brampton today.”

“The path to ending hallway medicine in Brampton starts with immediate phase two expansion of the Peel Memorial Urgent Care Centre, and building a new, third hospital for the big and booming community of Brampton. By voting no, Doug Ford’s Conservatives are forcing Brampton families to continue suffering through painfully long waits in an emergency room. They’re forcing patients — sometimes even the sickest patients — to be housed on gurneys in crowded hallways. And they’re forcing hospital staff to work past the point of exhaustion with too few resources.”

“Instead of taking action to fix the hallway medicine crisis, Doug Ford is threatening to take things from bad to worse. His government has been warning that hospitals need to prepare to do even more with even less — and Ontario is worried that Ford’s cuts will hit health care hard.”

Last year, over 4,000 patients were treated in the hallways of Brampton Civic Hospital. People often waiting anywhere from 40-70 hours for a bed, were stuck on stretchers in Brampton Civic's hallways during the hospital's Code Gridlock.

Code Gridlock - basically meaning the hospital was overcrowded - was in effect for 65 days at Brampton Civic in 2017.

In all honestly, the governing party rarely votes in favour of a motion brought forward by an opposition party; that’s just the way politics gets played out.

Most likely the government is examining all their available revenue sources as Finance Minister Vic Fedeli prepares to issue the Fall Economic Statement, followed by his first budget next year in 2019.

With the government recently undergoing a public consultation asking people what it should find efficiencies, it remains to be seen if a new hospital for Brampton is still on this government’s agenda.

Ford ran on ending ‘hallway health care’; let’s see if he will keep his promise for the people.

Top 5 Butter Chicken in Brampton
5 Hotspots outside of Brampton for a Family...
Top 5 Buffets in Brampton
Top 5 Places to Get a Snack in Brampton
5 Things to Do on Family Day in Brampton
END_OF_DOCUMENT_TOKEN_TO_BE_REPLACED