In one of Patrick Brown’s recent election ads, the Brampton mayoral hopeful railed that high taxes and runaway spending at city hall are a major reason that Brampton is being held back from moving forward.

Brown vowed to freeze property taxes and end that type of reckless spending, but some people are asking if he actually practiced what he preaches now, especially in his final moments as a provincial MPP prior to the June provincial election?

New documents showing expenses of departing MPPs as of the end of September showed that Brown spent almost $300,000 in his final months as the member for Simcoe North, as revealed in a tweet by a CBC reporter. 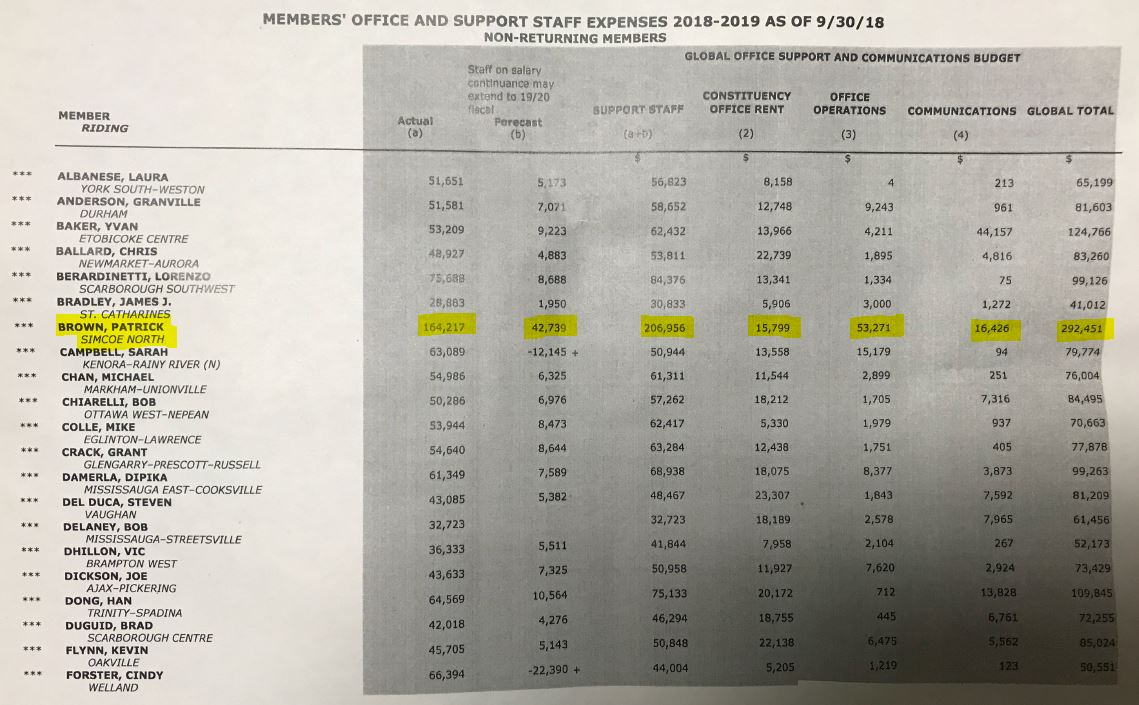 That’s more than $170,000 of any other departing MPP on this list. In contrast, former Etobicoke MPP Yvan Baker spent only $124,000 in his final months as MPP.

“All my staff were legally and morally entitled to severance in my transition from leader of the Official Opposition to MPP to stepping down at the last general election,” Brown said in a text to the CBC. “They were paid by the Ontario Legislature in accordance with the policy regarding severance for staff of departing MPPs and cabinet ministers.”

He did not reply to a follow-up question about why severance pay for staff terminated from his leader’s office during the 2017-18 fiscal year would have any impact of his MPP office budget in 2018-19.

Brown was turfed as PC party leader in January over allegations of sexual misconduct, and then sat as an Independent MPP after being kicked out of the PC caucus by then interim leader Vic Fedeli.

He chose not to run for reelection to the Ontario Legislature, and the Conservatives subsequently won a majority government under new leader Doug Ford.

Since then, Brown has been waging a close battle to become Brampton mayor as part of an attempted political comeback, (which began when he first ran Peel Regional Chair before Ford cancelled that election), facing off against incumbent Linda Jeffrey.

This latest revelation of Brown’s own record of ‘runaway spending’ didn’t sit well with some of his former colleagues. PC MPP Randy Hillier, one of Brown’s harshest critics when the first allegations surfaced, said this to reporters at Queen’s Park:

@patrickbrownont shows a pathological pattern of pursuing public office to enrich himself. Here are some comments I provided to the media on today's story of his abuse of public funds. #onpoli pic.twitter.com/3MF20WA8ba

“He is unfit to be an MPP, he is unfit to sit in this Legislature, and with these latest revelations I want to add he is unfit to hold any public office,” Hillier said, adding that Brown “shows a pathological pattern of pursuing public office in order to enrich himself, spending his entire year’s budget in just over 30 days.”

Hillier concluded that Brown’s excuses were lies and he is demanding a full investigation by the OPP.

How much of a factor will these latest revelations affect the contest between Brown and Jeffrey? That remains to be seen.