Voting Day for the upcoming election is only three days away, and a recent poll indicates that this could be a very close race.

According to a report released by Forum Poll on October 19, both Patrick Brown and Linda Jeffrey secured support from 40% of the poll’s respondents.

“Among 647 Brampton voters, amongst those decided and leaning, if an election were held today, Patrick Brown would secure support from 4 in 10 (40%), the same proportion as Linda Jeffrey (40%),” the report reads.

Support for the other candidates is also listed. 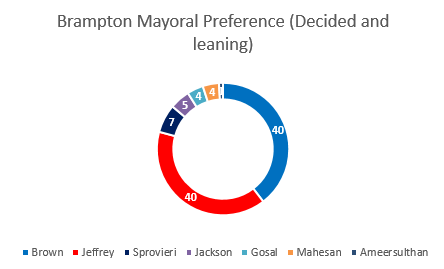 What are your thoughts on this poll’s findings?