In a previous article, inbrampton.com outlined some reasons why auto insurance rates are going up. As this provincial election campaign continues, auto insurance also continues to be a hot button issue, and parties are hoping to attract votes with their latest idea on how to lower premiums: ending how premiums are calculated based on your postal code.

And each party has their own take on ending that “geographical discrimination” across the province.

"We will end neighbourhood discrimination in auto insurance - where people with postal codes in poorer neighbourhoods end up paying more for their coverage. Your premiums will be based on your car and how you drive, not where you live," reads the the Ontario NDP’s 94-page platform.

According to the Canadian Underwriters, the NDP is also considering public auto insurance.

"We will look beyond the current system if insurance providers do not provide the savings people deserve," reads the NDP’s platform.

The Ontario Liberals made the same promise to end auto insurance premium hikes by postal code, but they were slightly more vague on the details on how to do that until after the June 7 election.

The Ontario PC party does not have a stated position on auto insurance as of yet, since they have yet to release a costed platform, but in the previous platform, the People's Guarantee, the PCs had also promised to do away with postal code-based insurance rates as well. 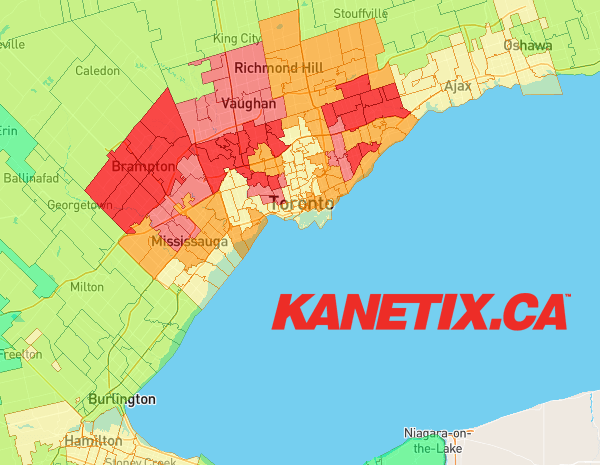 Nowhere is the topic of auto insurance more important than in Brampton, which boasts some of the highest premiums in the GTA at over $2,000 annually. You can see from this map that the entire city is marked in red, indicating it’s one of the most expensive areas for auto insurance, along with parts of Etobicoke, North York and Scarborough.

But let's examine whether ending so-called "geographical discrimination" in auto insurance can actually be done.

The method of calculating insurance premiums is a rather complex process that involves detailed actuarial science.

According to the Insurance Bureau of Canada, where you live is only one factor in how insurance companies determine the pricing of premiums. Other factors include how often you drive, what you use your car for, the model and type of car, your age and personal driving history.

Several insurance companies, the most recent being the CAA, have attempted to address this by offering discounts to policy holders who install a telematic device in their car or download an app to monitor what time of day they are driving, and how hard they break and accelerate.

“We believe that insurance options should be designed based on individual lifestyles and the various stages of people’s lives,” said Matthew Turack, president, CAA Insurance.

But that may be a moot point because it all comes down to the frequency of claims in one area, and you don't need statistics to notice a trend in Brampton that a lot of risky vehicle use is occurring. Inbrampton.com has documented numerous incidents of vehicles crashing into the side of buildings, lampposts, and each other, right here in Canada's ninth largest city.

On top of all that, there are also instances of drivers taking an 18 wheeler up to a McDonald's drive thru and a man driving backwards on a major Brampton regional highway.

Are you really surprised that Brampton is considered a high-risk area for crashes and insurance claims?

You might be wondering - why not just rate the entire GTA region in the same manner as you would Brampton and other high-risk communities for auto insurance claims?

The logic behind that is we are all living in big city areas where more people are driving, hence increasing the chances of getting into accidents anyways than, say, in the more idyllic rural countryside.

Ironically, the problem with that is it penalizes everyone else in the GTA unfairly, in the same way that Brampton drivers complain about high insurance rates in their city. You might have people up in Keswick and out in Pickering wondering why their premiums suddenly skyrocket when their areas do not have as many crashes or as much claim activity.

In general, by not including the geographic factor when it comes to rating premiums, the insurance industry would have to alter and re-adjust the actuarial formula, which could affect premiums nonetheless.

So as you listen to the various politicians making promises about lowering auto insurance rates and promising to do away with "geographical discrimination", keep in mind that they may not yield the desired result.

At the end of the day, there’s just been too many car accidents in Canada’s ninth largest city that have built up cumulatively enough to result in Brampton having some of the highest auto insurance rates in the province.

So it is quite moot to blame the politicians, let alone the industry, for the way auto insurance has ended up in Ontario. And whatever they propose during this election campaign and after it is over may not solve the issue at all.