The Reasons Behind Brampton's Concerns Over Mississauga's Independence Move

Brampton Mayor Patrick Brown, not to mention the rest of the city, has been having a tough time with Ontario Premier Doug Ford as of late. On top of that, now the city has to deal with neighbouring Mississauga’s—more specifically Mayor Bonnie Crombie—ambitions to take the city out of Peel Region, leaving Brampton in the proverbial dust.

The city's future seems uncertain after the double whammy of Ford's announcement of a regional government review and Mississauga councillors endorsing Crombie's motion to make Mississauga an 'independent' single-tier municipality. The province's review is scheduled to conclude in the fall of 2019 with its recommendations.

Mississauga has been observed to have the upper hand on this current situation, seemingly having the ear of the Ford government. After all, Ford counts former mayor Hazel McCallion as a close confidant and "unofficial" advisor. Ironically, so does Brown, but it doesn't seem like any advice McCallion could offer the Brampton mayor is helping.

Brown has suggested that Brampton paid for much of Mississauga’s infrastructure over the last couple of decades, saying that now that it's Brampton's turn to grow, Mississauga is conveniently demanding to get out "without paying its part of the bill."

For her part, Crombie disputes that theory, saying that development charges were what funded Mississauga's growth over the last forty years.

There are three distinct reasons, one more niche than the others, as to why a split would be concerning for Brampton.

With Mississauga essentially built out, development charges are not fueling that city’s growth as much anymore, so the argument that the city needs to leave Peel (which is a pretty drastic step) in order to get the most out of the taxes it collects is compelling. But Brampton hasn't been totally built out yet, what about development charges financing Brampton's future growth?

From observing planning meetings over the last year or so, it doesn't seem Brampton is experiencing the same level of interest from the development community as Mississauga. Aside from a number of condo developments near downtown Brampton, most other development applications are proposing to redevelop an area or cover an existing area.

Brown has said he wants development to focus on the economic considerations in Brampton, as in how many jobs the new development would bring in. With a shift over to commercial considerations rather than just residential, it may be more difficult to attract more business to Brampton in the form of new development—especially considering that struggles over issues like transit, post secondary education and healthcare may factor into businesses' considerations when it comes to investing and setting up shop in Brampton.

The second reason is a more nich and, some would say, crass political reason: a Brampton without a contingent of regional councillors means a good chunk of politicians would lose money from the salaries they collect as regional councillors. Mississauga councillors should at least be recognized for the fact that they are essentially endorsing a move that would result in a significant pay cut on their end.

As many have surmised, Ford’s modus operandi has always been about reducing the number of politicians in any area. He did that with the City of Toronto, who is to say he would not do the same with Brampton? Another observation is having an ‘independent’ Brampton would ironically achieve one of the goals that council has been trying to achieve for years: have all their councillors seated at a governing body.

Without the Region of Peel, all of Brampton's 10 councillors would be free to represent one ward, instead of the current arrangement where two councillors represent two wards with one representative sitting at the region. 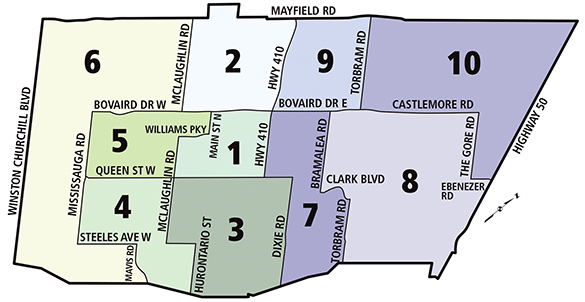 That would definitely streamline things for voters who no longer have to think about voting for two councillors instead of just one. But as for those in elective office, it might affect them as previous areas where their votes were strongest may no longer be available. Likewise, councillors who ran "as a team" in certain ward pairings would get split up and have to campaign on their own. It may also create certain dynamics if two councillors who live in the same ward have to run against each other to keep their jobs.

Speaking of the aforementioned Ontario premier, the third reason is obvious: this could be seen as another Ford attempt to put one over on Brampton. As if the university funding cancellation, recent messing with the GO train commute and various missed opportunities to invest in local healthcare weren't bad enough, a Brampton deprived of regional resources for future growth and left to "stand on its own" can be interpreted as another shot from Ford at Brampton.

With Crombie constructing the narrative on regional separation for Mississauga as a cost savings and efficiencies measure, no wonder she and others supporting this move are confident that Ford is listening. Even accepting the removal of a key component of the Hurontario LRT can be interpreted as another sign that Mississauga is playing nice with the provincial government in order to get the province to approve the plan for Mississauga's independence.

Mississauga is planning to host a town hall on April 8 at city hall, starting at 7 pm, to hear from the public on the matter of the city leaving the region. Perhaps Brampton residents (as well as its politicians) should attend as well in order to provide another version of events in this interesting story that is unfolding. Another action Brampton should take is to undergo its own study on what happens to Brampton if there is no Region of Peel anymore.

Should Brampton swallow the bitter pill and accept a future without regional government (are there enough people around to care at this point?), or should Brampton fight for an alternative solution, such as a more fairer distribution of responsibilities between the region and cities?

Whatever the case may be, it would be best if Brampton starts planning ahead.