This Tall Condo Could Be Coming to Brampton Near the LRT

There’s been some talk in the past about how Brampton needs more ‘high density development’ as a way of transitioning out of being a suburban community to accommodate more people coming into Brampton.

The proposed application is asking for permission to construct a 20 storey mixed use building with 186 residential units along with retail and commercial uses. This half a hectare site is currently occupied by a Galito restaurant, some auto mechanic shops and a Petro V Plus gas station.

When completed, the building is supposed to look like this: 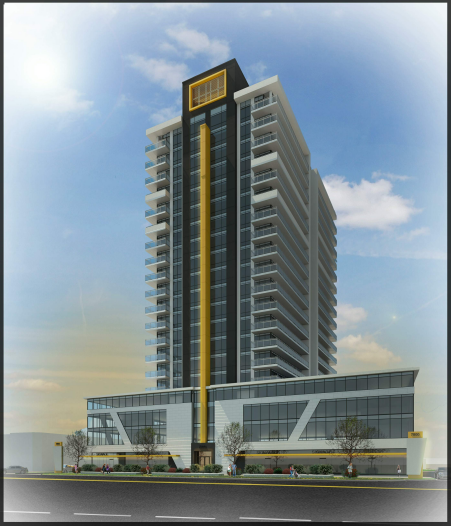 Here’s a view of the proposed building in proportion to the surrounding area. 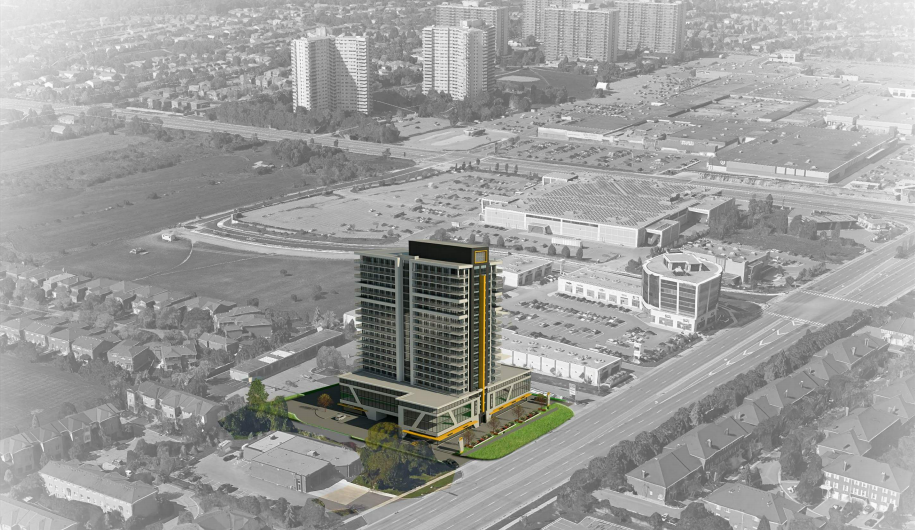 Below is a picture of the site plan. You can see from the site plan that the intention is to have an entrance and exit that can be accessed via right turns only. 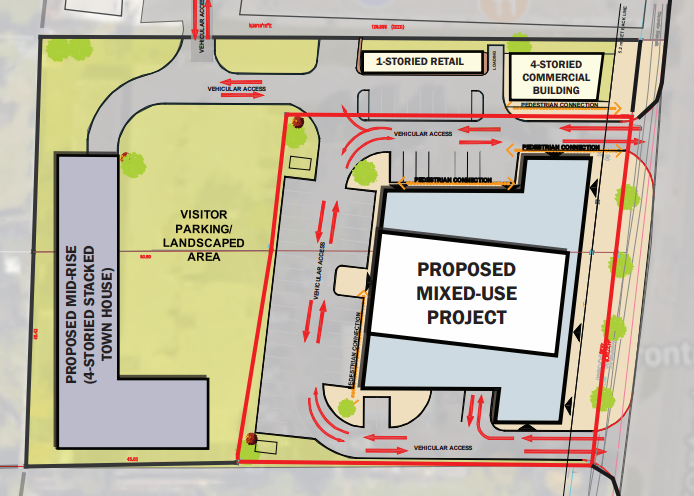 There will be three levels of underground parking beneath the building, with a total of 229 parking spaces provided, as well as the retail space at ground level and a penthouse on top. 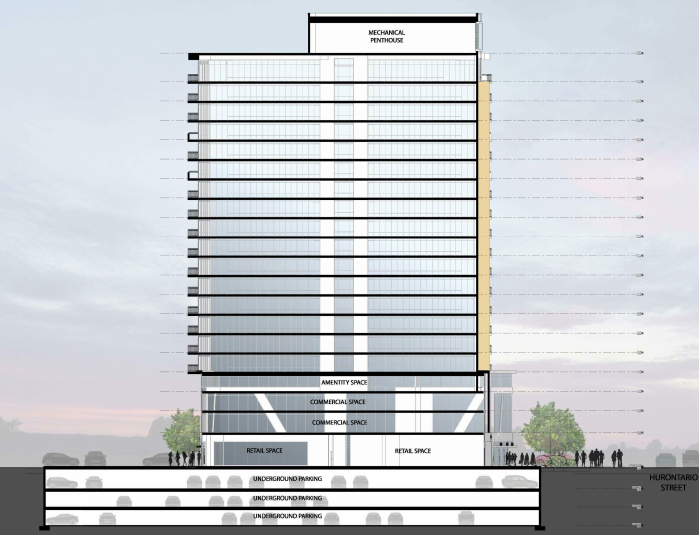 Here’s an artist’s concept of the retail space. 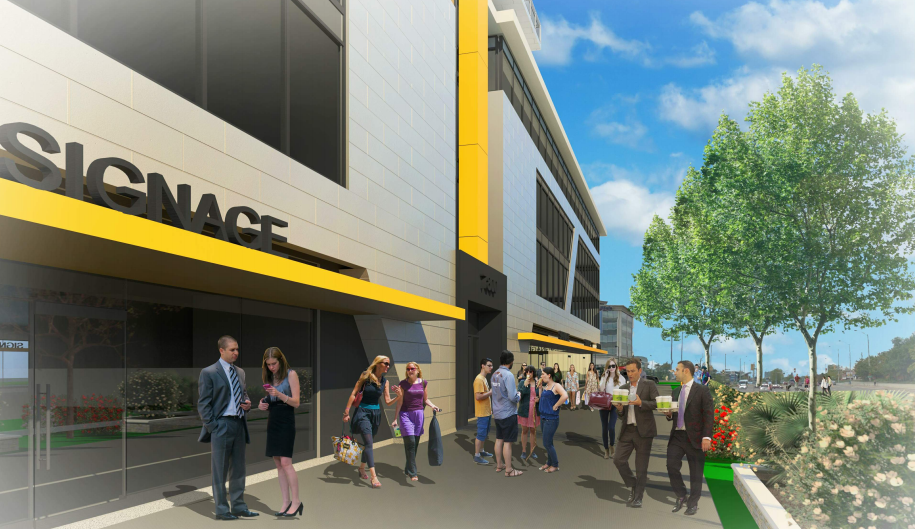 And here’s a glimpse of what else would surround this proposed building. 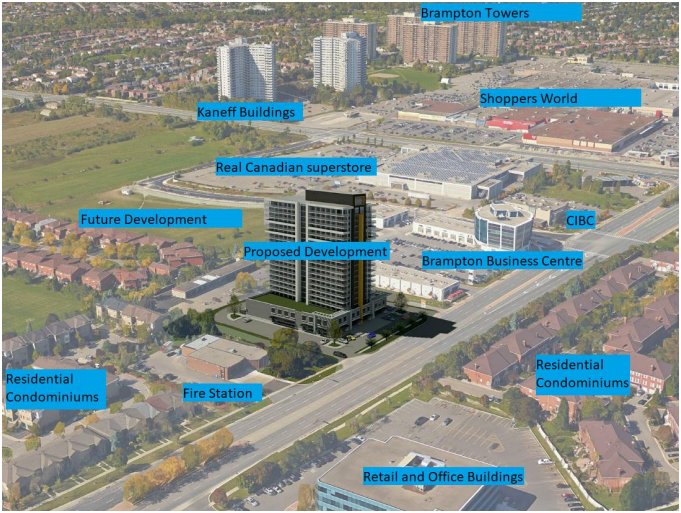 There is no doubt this building was being proposed with the existing Hurontario LRT in mind; the planning report from the applicants referred to the project as such. Many condo applications in Mississauga have been put forward with the LRT in mind, but this might be the first condo application in Brampton with LRT in consideration.

Since this condo would be south of Steeles Avenue, it’s still along the LRT track slated for construction. The plan calls for a 5.2 metre wide setback is planned because of the light rail expansion.

“The (Hurontario) corridor is a logical focus for both cities to invest in infrastructure and design. The two cities envision the plan for Hurontario/Main Street as a critical city building initiative that will help them remain socially, environmentally and economically sustainable and competitive,” stated the planning report.

Despite the generic optimism behind justifications on having such a building in this area, there are a number of residential areas around the site with people who might have something to say about a 20 storey building going up near their homes.

One thing people may have concern about is the height, specifically the shadows the building will cast during a given day. A shadow study was done by the applicant shows some rather interesting scenarios happening during one day in March, June, September and December of 2018 when the study was being conducted.

In March, while during the hours of 9:30 am and 12:30 pm the building’s shadow mostly loomed over adjacent commercial site areas, by 3:30 in the afternoon and 6:30 pm is when the shadow goes over certain residential areas. 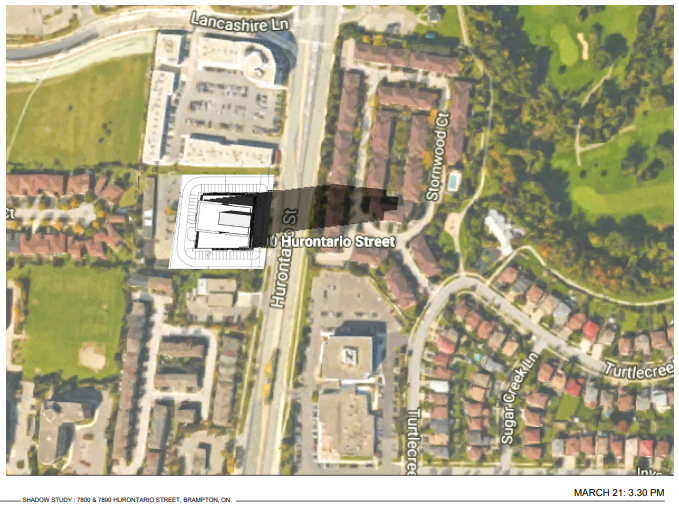 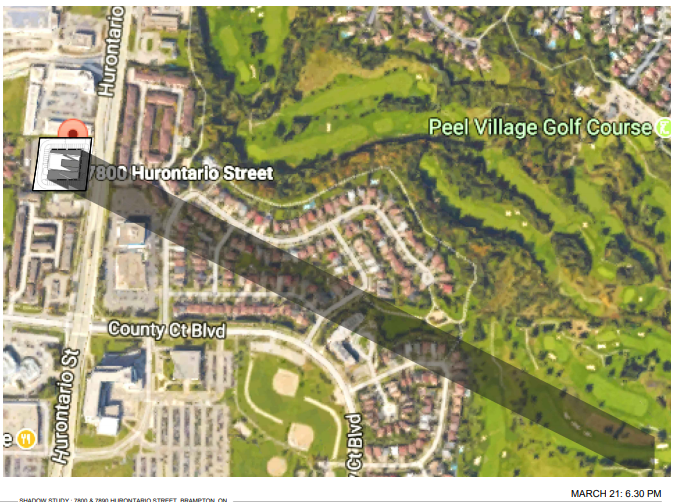 By June, the shadow from the building around this same time is less intrusive. 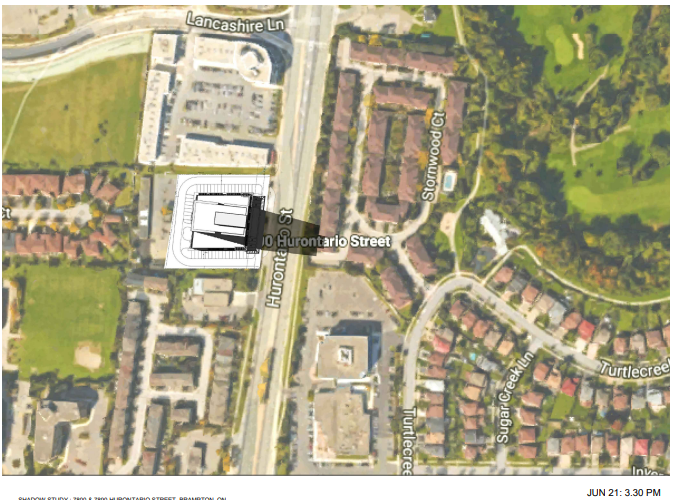 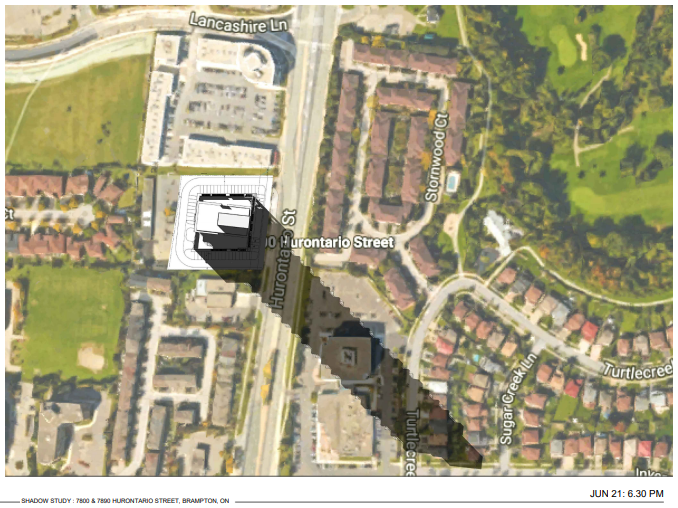 Here’s the view of the shadow in September at 6:30 pm. 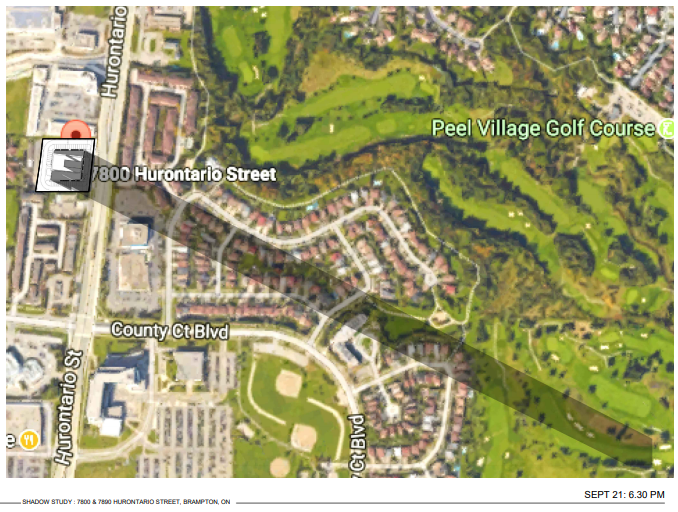 And by December, the views of the shadow around 3:30 and 6:30 pm were similar as it was in March. 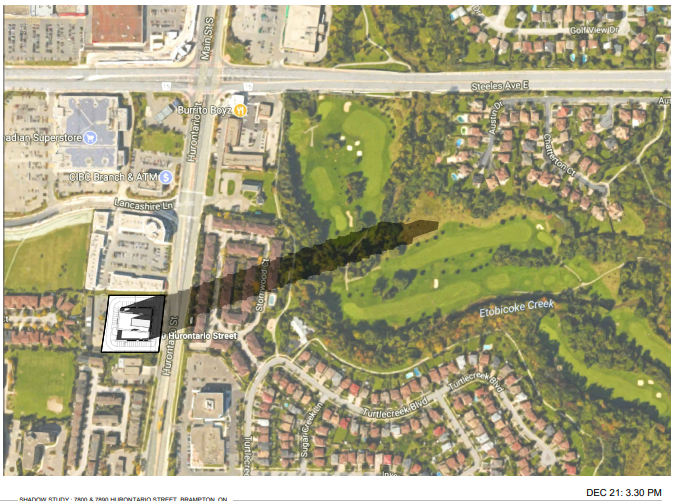 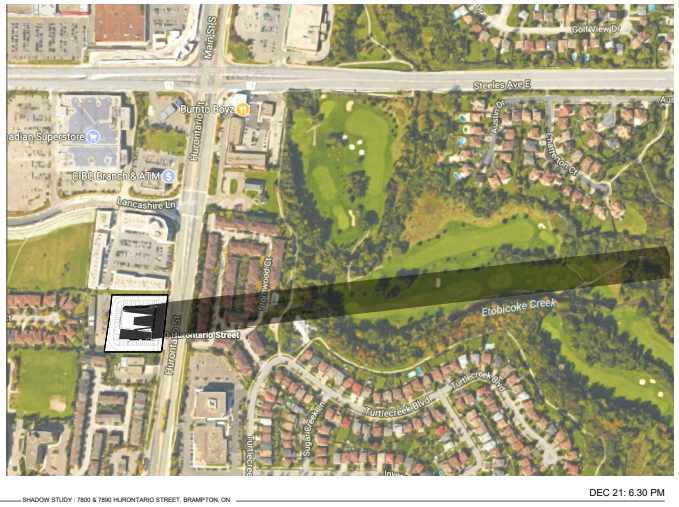 During the statutory public meeting on February 11, four issues were presented that needed to be addressed. 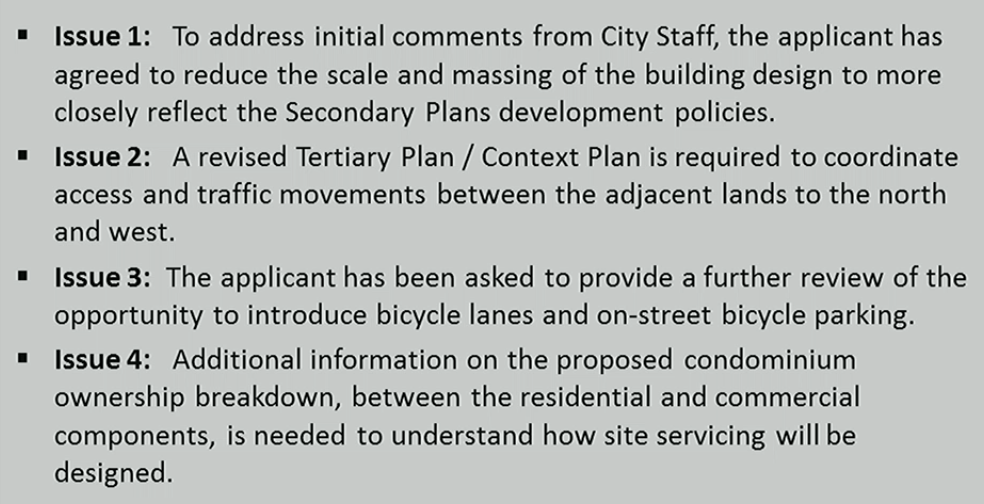 Aside from a question from Councillor Jeff Bowman about what is known as the floor space index (FSI) because the applicant was looking to use a US FSI definition and Councillor Doug Whillans asking if the sustainability score could be higher than 72, there were no comments from residents on this application during the public meeting.

It should be noted that no final decision has been made regarding this development.

What do you think of this proposed condominium coming to Brampton?

5 Strange Landmarks You Can See Outside of...
5 Oldest Neighbourhoods in Brampton
5 Best deals being offered by local wineries
Top 5 Pho in Brampton
Top 5 empanadas in Brampton
END_OF_DOCUMENT_TOKEN_TO_BE_REPLACED