A veteran Brampton city councillor is calling it quits after over 25 years in office.

Wards 1 and 5 Councillor Grant Gibson announced in a press release to inbrampton.com that he is not running for another term in the 2018 election, saying he is looking forward to traveling with his wife Alison and spending more time with his grandchildren. 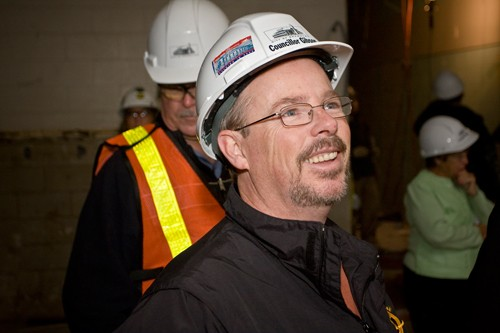 "Over the years, the job of Councillor has changed. We have seen Brampton grow from a small town in the GTA to one of the largest, and most vibrant cities in Ontario. We have faced a lot of challenges and had a lot of successes. But this job is about the people we represent and I have found my greatest enjoyment when I am working with  my constituents to find solutions to their problems. That's why I ran for office in the first place; to help my neighbours," Gibson said in his statement.

Along with Gibson, Regional Councillor John Sprovieri also recently announced his intentions to retire from council in 2018, after his City Council colleague Gurpreet Dhillon said he was running to take his place.

Gibson was first elected as an Alderman for Ward 5 in 1991, following in the footsteps of his father, Chris Gibson. During his 8 terms of office, he served on several committees, and was Chair for Community Services, Building and Bylaw, Planning and Budget committees. After the reduction in the number of wards in 2003, Gibson became the City Councillor for Wards 1 and 5.

In 2006 and 2014, he was appointed Regional Councillor by his fellow Brampton councillors. The City of Brampton was allocated an additional seat at Regional Council by the province in 2006, and while 6 councillors (including the mayor) are elected to serve the Region as well, the extra seat was to be decided by appointment. The other councillors would pick one of their members who only sat at City Council to double up serving on Regional Council as well…along with a hefty pay increase.

What is telling is by his own admission, Gibson is correct that the role of the councillor has changed over the years. Municipal politicians have gone from focusing on very local issues in a small town fashion, doing it part time, to a full time political role in Canada's ninth largest city dealing with more complex issues like planning, transit and economic development. 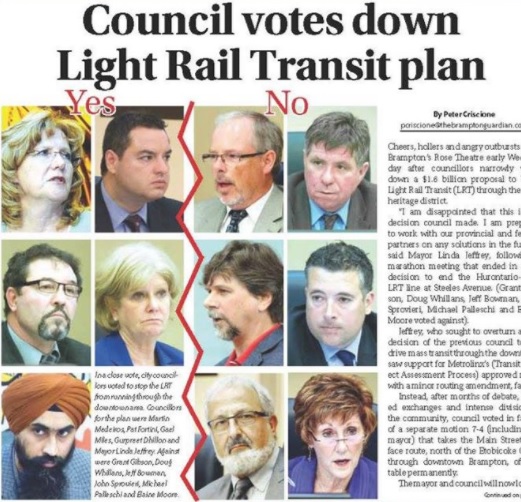 Gibson was one of the six Brampton councillors to vote down the province's original LRT plan, along with Councillors Elaine Moore, John Sprovieri, Mike Palleschi, Jeff Bowman and Doug Whillans

Perhaps leaving now is a good time for an incumbent that has been in office since the last century to give the reins to someone who is more adept at dealing with Brampton's more complex present day problems. Some of Gibson's recent votes and public statements seem out of sync with regular Bramptonians. He was one of the 6 councillors who voted against the original Hurontario LRT plan to extend it to downtown Brampton, and expressed "concern" that a university might attract a crowd more interested in 'drinking and partying' during a January 2017 Committee of Council meeting.

Ward 1 and Ward 5 consist of downtown Brampton and the surrounding neighbourhoods like Lundy Village, Northwood Park and Spring Valley, but the core areas and within downtown Brampton. With Gibson retiring, this opens up an opportunity for people who consider themselves more civically minded and engaged in building on the future of Brampton....or at least aligned more with what Mayor Linda Jeffrey's vision of what the future of Brampton should be.

Jeffrey has been on the losing end of a number of key votes lately, and those aforementioned six councillors were the ones usually voting in a bloc against her initiatives. Getting a councillor more aligned to Mayor Jeffrey's positions and issues could shift the council control back in favour of her and her allies. Some time ago, inbrampton.com referenced local transit advocate Kevin Montgomery and the former chair of Brampton Board of Trade Jaipaul Massey-Singh as potential future council candidates.

Could this be a sign for those two gentlemen, as well as scores of others who are interested in changing the course of political leadership in Brampton, to run now that a coveted council seat has been made available? It would certainly be a game changer if Jeffrey manages to get another vote taken on the LRT to restore the originally planned route into downtown Brampton.

With such high stakes involved beyond just getting a new councillor, the local race in Wards 1 and 5 will be one to watch in the municipal elections.