Here's What You Need to Know About Brampton's Election

The municipal election campaign in Brampton is proving to be packed with more intrigue and excitement than people expected. On the heels of several heated mayoral debates, plus the possible involvement of Doug Ford operatives helping Linda Jeffrey, a former Liberal MPP, win reelection, here are the latest developments in the Brampton elections.

The aforementioned debate was, as of now, the most heated exchange between frontrunners Jeffrey and Patrick Brown for the mayor’s chair.

Speaking of more opportunities to hear from Brampton mayoral candidates…

Another mayoral debate is happening

The Brampton Real Estate Board (BREB) has what is being referred to as “a meet and greet” with mayoral candidates this Thursday, October 4, at the BREB offices at 60 Gillingham Drive, Suite 401 near Main Street and Bovaird Drive. It will be streamed live on BREB’s Facebook page.

One of the candidates, Wesley Jackson, has already confirmed his attendance.

This Thursday’s BREB Mayoral function is going to function a lot more like a debate, with opening statements and pre-selected questions to be asked.

All seven candidates have been invited, and it will be live streamed on the BREB Facebook page.

Regional Councillor Gael Miles stars in my first RADIO COMMERCIAL, on radio across the GTHA starting today! Here's some of what Gael has to say: pic.twitter.com/iq6sSkypkC

Coun. Miles’ endorsement is a bit intriguing since her colleague Fortini is running in her place, but considering that Miles is chairing Patrick Brown’s committee on public safety matters it’s no surprise she endorsed someone (Marshall) who is seen as more aligned with Brown than with Jeffrey.

Meanwhile, another outgoing regional councillor, Elaine Moore, made her views very clear after the Rose Theatre debate with regards to her support in the Brampton mayoral election.

“I think the mayor’s comments were misleading and unhelpful (with regards to council’s dysfunction), and she wonders why seven of us voted against her,” said Moore, adding that she is endorsing Patrick Brown.

Finally, at Regional Coun. Martin Medeiros’ recent campaign event, a number of high profile political attendees who stopped by to show Medeiros support included Jeffrey and several others, as well as a very familiar face in Brampton politics. 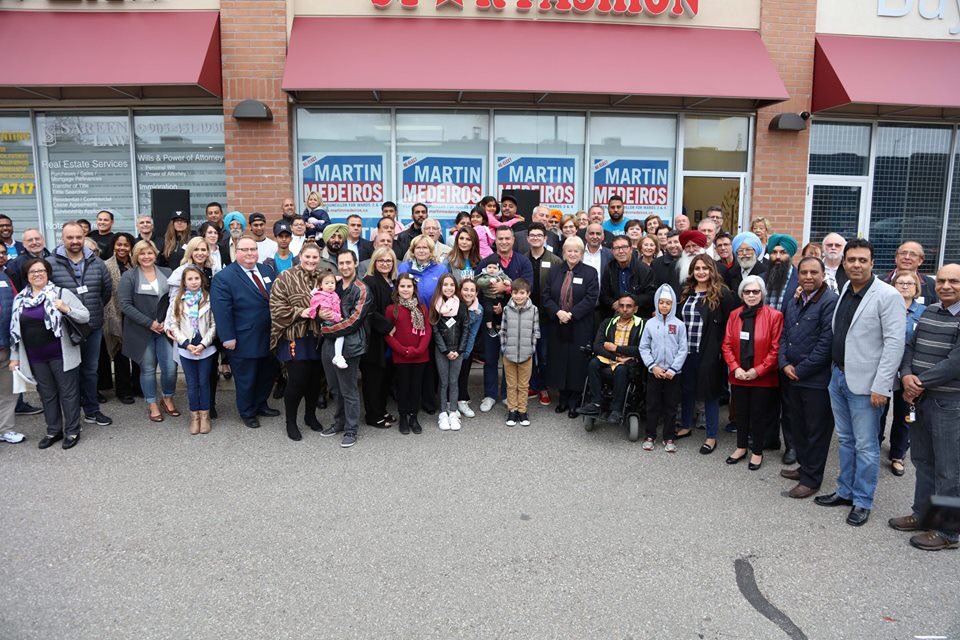 Medeiros (centre) is flanked by Jeffrey on his right and former mayor Susan Fennell on his left. It just seems like delicious irony to see the immediate past mayor in the same spot with the current mayor that defeated her four years ago.

Fennell ended up in a disappointing third place finish in 2014 as Jeffrey won the mayoralty with 50 per cent of the vote, after years of being embroiled in spending scandals.

She also didn’t get along with the last council she presided over, which included then regional councillor John Sanderson, who is now running for his old job against Medeiros.

“The enemy of my enemy is my friend” sounds like a saying that applies here.

Brown promises free transit for seniors 65 and over

The former PC leader recently announced he wanted to bring free transit for Brampton seniors at this press conference.

“As mayor, I will bring free transit fares for seniors, in order to make life easier for them so they can use public transit much more easily in Brampton and get to their appointments on time,” Brown said, adding it was a way to also deal with traffic gridlock by getting more people using transit.

Brown is modelling this idea after after what was implemented in Hamilton, which pegged the minimum age of a senior to get free transit at 75. Brown’s plan will allow seniors age 65 and up to use the service. “If we set a goal rather than wait for studies, we can have a plan in place right away to bring forward that affordable city as outlined in the Vision 2040 plan,” Brown continued.

Initial assessments have pegged the cost of Brown’s plan at $500,000, which he says can be offset by optimizing advertising opportunities on shelters and buses.

What are local council candidates promising?

I thought it would be informative to take a look at what candidates for either city or regional council are promising beyond the standard pablum or talking points about “cutting red tape,” “standing up for seniors / youth,” or “building transit for the 21st century”.