Who's Really in Charge of Brampton City Council?

Since this new city council in Brampton got sworn in, the have already taken action on a number of items.

While they deferred the decision whether to allow cannabis stores in the city, the council also passed a motion to reexamine the LRT route along Main Street going into downtown Brampton.

The original motion had enough support to pass, albeit on a vote of 6-5, but after some persuasion from Mayor Patrick Brown it was amended to include studying a tunneling option, which allowed the motion to pass unanimously. It should be noted that the tunneling option was already studied a few years ago.

It should be noted that those six councillors (Rowena Santos, Paul Vicente, Martin Medeiros, Pat Fortini, Gurpreet Dhillon and Harkirat Singh) were either favouring the original LRT route prior to 2015 or expressed favour for it during the municipal campaign. It was these self described "progressive" six that pushed through this revised LRT plan.

This past week, that same group at the Region of Peel voted alongside Mississauga colleagues for former Mississauga councillor Nando Iannicca as the new regional chair. Brown nominated and voted for former Ontario finance minister Charles Sousa, along with Regional Coun. Michael Palleschi. 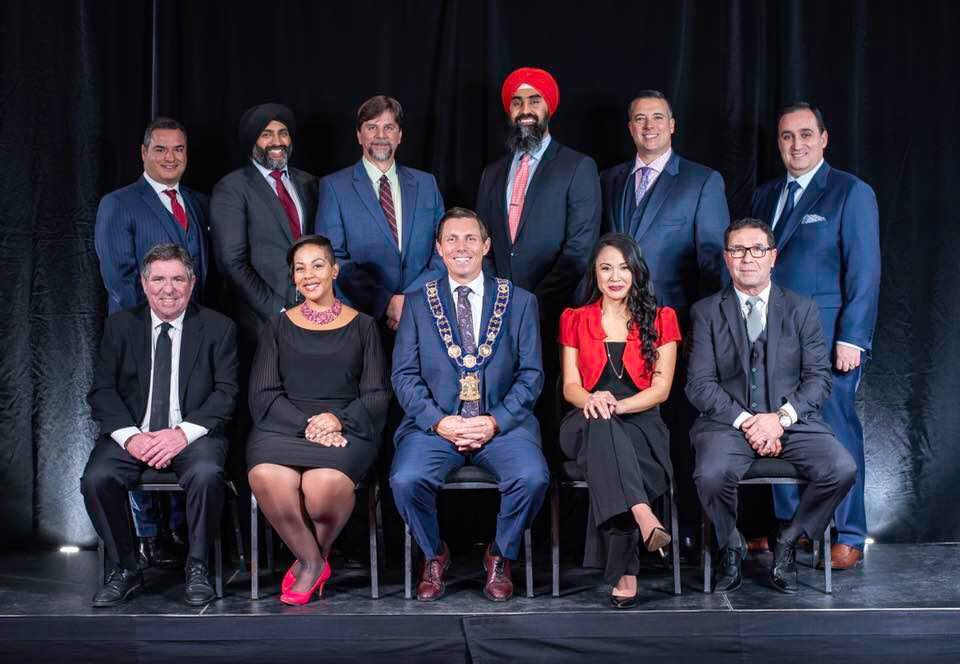 For those of you keeping track, that's two "wins" for the "progressive" councillors, which is a stark contrast to the Linda Jeffrey years when a somewhat more "conservative", old-school faction that held sway over votes in council. No doubt that there are many fans of this new approach in local politics.

But not every quarter of the city is celebrating. A group called "Citizens for a Better Brampton" have raised concerns over perceptions that an elected mayor's ability to carry out his mandate is being undermined by these councillors.

"To blindside the new Mayor at his first meeting of Council, was shameful, and does not bode well for our future. Let's get away from thinking in terms of bloc voting, and back to independent thought of what's best for our City. That's what the community wants. Please don't disappoint!," the statement from CFBB's co-chairs reads, referring to those six council members.

However, one interesting observation came up as someone in response noted that more people voted for those six councillors combined than they did for Brown, who won around 46,000 votes over Jeffrey. 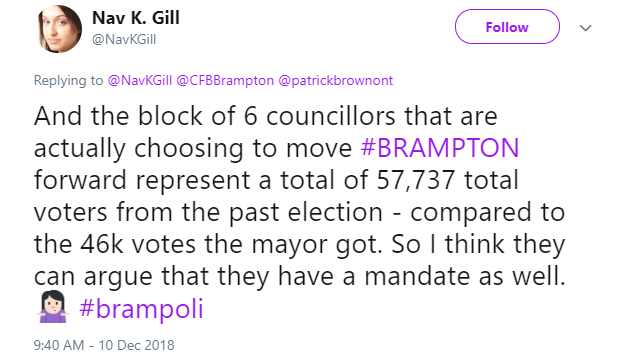 This individual also pointed out that Brown's mandate is relatively weak considering how many actual registered voters there are in Brampton. 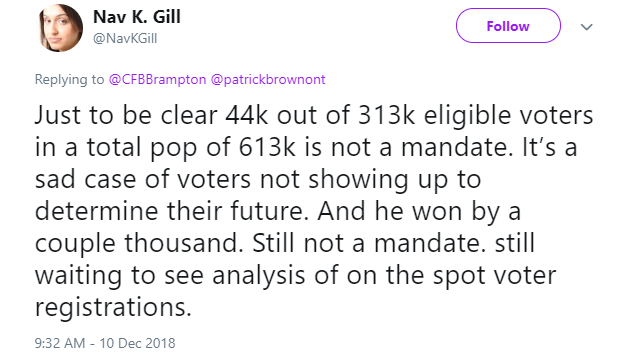 Brown won 44 per cent of the vote in total, compared to Jeffrey with 40 per cent, winning by just over 3,000 votes. With voter turnout being around 34 per cent, Ms. Gill does have a point.

Now she's not saying that the six councillors should just be running the city; that is still the mayor's job at the end of the day. But since Brown as well as several councillors on this list won with less than 50 per cent in their races, it's hard to claim they have a clear mandate in some quarters.

One solution is to implement a ranked balloting system for municipal elections, like the one that just concluded in London, Ontario. The idea is to allow voters to rank their preferred candidate by first, second and third choice, rather than restricting them to just one. That would ensure, for the most part, a winning candidate for mayor or councillor gets 50 per cent plus one of the residents' votes.

That may be a way to ensure a winner gets a 'clear mandate', as some would describe it. In the absence of such a system, whoever is the winner should have a clear mandate to try implement his or her promises to Brampton voters.

But with these six councillors currently holding sway at the moment, expect more decisions in the next several months showing, if not a 6-5 split, those six siding with each other on the same issue on more than one occasion.

Undoubtedly Brown and these six will find common ground in several other areas, but there will be disagreement. And that could be a good thing, despite the mayor's concerns that he doesn't want to see "divisive votes based on a 6-5 split." This is a democratic system after all and vigorous debate should encouraged.

Who knows? Maybe Brown would end up siding with the ‘progressives’ more and more down the road.